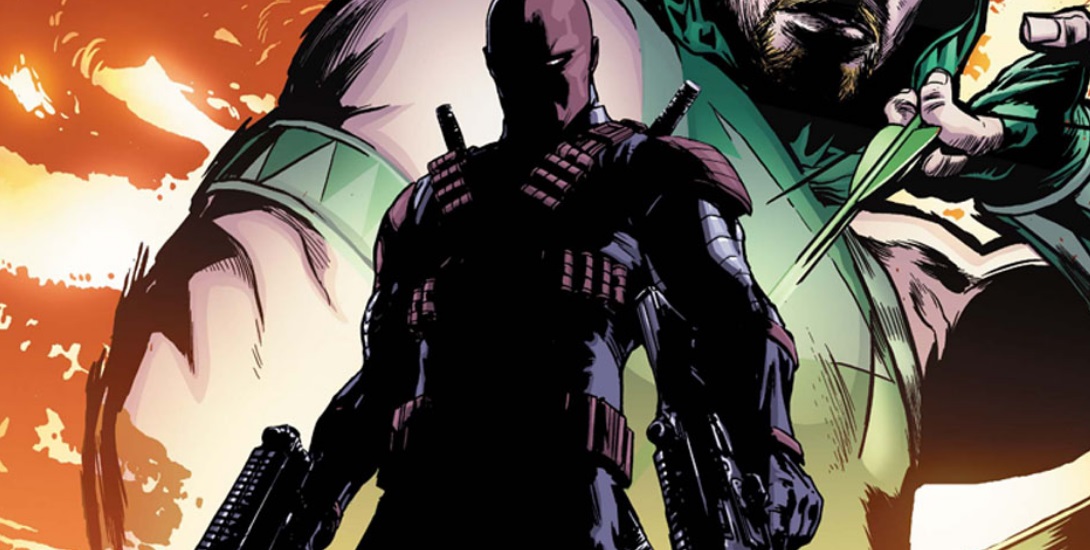 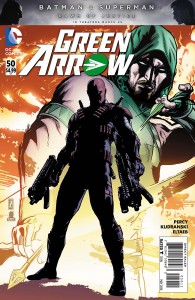 Green Arrow is the latest DC title to hit the #50 mark, infecting comic shops this week. In fact, infection is the name of the game in this month’s issue, as pretty much everyone is looking to infect others or cure themselves of an alien virus – even Oliver Queen himself!

The beginning of the book vaguely reminds me of one of Blade II’s opening scenes. You know, “scary hooded guys walks into a blood bank” and all. But instead of outright slaughtering the staff, Marrock and his buddies seek to infect the rest of Seattle via blood banks. Now that’s using your noodle.

Tycoon Jeffrey Paragon, who is kind of like a cross between Mr. Burns and Nosferatu, also seeks a cure to the virus and won’t leave matters to the stroke of fate. More on that in a bit.

Benjamin Percy does do a pretty good job of writing for the characters within, even though this issue didn’t particularly knock my socks off. There’s some decent introspection from Ollie and the supporting cast plays well off him, although they don’t have the charm or camaraderie of those on the TV show.

Szymon Kudranski’s art is the clear highlight and is quite astonishing. If you are also someone who follows his work, you can rest assured that he brought gallons of ink, as can be expected.

Deathstroke, whom I not so subtly alluded to earlier, shows up a little too late and doesn’t play as big of a role as you would have expected from his adorning the cover of an oversized anniversary issue. The only battle between he and Green Arrow involves planes, oddly enough. Fans would have probably preferred a nod to Arrow Season 2 rather than Ace Combat. The two gentlemen’s paths converge as they search for a man with miracle blood. I guess we will all have to wait for next month’s issue to see what happens next with Slade.

Although a decent read, this felt like an average issue, only with a higher page count. It doesn’t quite have the punch you would expect from something with a #50 on the cover.