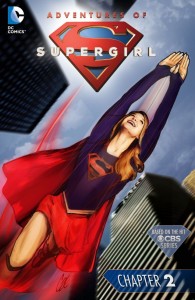 Before the release of Adventures of Supergirl, I had only read digital first series when they were collected into print editions. Now that I’ve read installments of a series of this ilk in its purely digital format, I must confess that I have a new found respect for creators who take on projects such of these. When you start to think about it, a real challenge must come with the task of telling a decent story when you are limited to ten or so pages.

Speaking of challenges, I wonder what it must be like for Sterling Gates to approach the character of Supergirl in a different way. Sure, he has written for her before in the comic book medium, but here he must keep the tone of the TV series. It’s the same character, yet there are subtle differences. Regardless of whatever hurdles he may have had to jump, he nailed the formula for the second consecutive chapter, as did his creative partner, artist Bengal. Said penciller once again did a stellar job with a hint of manga influence, if I’m not mistaken.

The creative team did a commendable job of capturing Supergirl’s interpersonal dynamics with both Alex and Winn, which translated rather well from the TV show to the page. “Seamless” seems to be an apt word for this situation.  We also learn about Alex’s connection to Rampage, who is the current threat for this tie-in series. The mix of superheroics and drama that makes legions tune in each week will make them feel right at home when they sit down to read this.

Believe me, a lot of content was packed into those ten pages. Following a largely introductory first chapter, this one certainly didn’t waste any time getting to the meat of the story. It’s very entertaining and well worth the time of the Maiden of Might’s fans.