With comic book conventions and digital releases on the rise, it has become easier for independent creators to get their voice heard. While we have had indie creators appear as guests on past episodes of A Podcast For All Seasons, we normally post interviews in this format with people who work on DC books. The funny thing is that you never know who will go on to work for the Big Two, so enjoy this rare treat.

Surprisingly enough, I did not meet Rachel Carroll, The Sick Rose Vampires’ writer/artist, at a local convention. She and I actually met through a mutual friend at a nightclub of all places. After learning of her work, I decided to grant her an interview. After all, vampires, especially those in an urban setting, are a hot commodity these days.

As of now, only one volume of her series has seen release in the form of Blood & Alcohol, although more will soon arrive. We at DKN appreciate the opportunity to sink our teeth into this material and hope you enjoy delving into the mind of an up and coming creator. 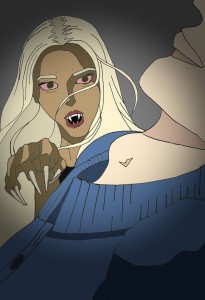 DKN: Can you tell us a little bit about your background in comics and how The Sick Rose Vampires came about?

Rachel Carroll: My background in comics is very limited, but I have always liked to write and draw. In 8th grade, I did a daily comic strip on loose-leaf paper that I would pass around to my friends. In Studio Art class my senior year of high school, I made my first comic book. I like using writing with drawings to tell a story or make a statement. The Sick Rose Vampires was first supposed to be a novel, then a web comic, then a novel again. I decided to release it in paperback as a serial with the first chapter being book one, Blood & Alcohol, using illustrations from the web comic. I have a novel’s worth of writing already done for the series. It’s a story about alcoholism, vigilante justice, interracial romance, and of course, vampires.

DKN: Why did you choose to mostly go with a more prose style format with illustrations peppered throughout as opposed to more traditional dialogue balloons and things of that nature?

RC: A lot of that has to do with how The Sick Rose Vampires started out as a novel, and not having a lot of experience reading traditional comic books. That being said, you will see more dialogue balloons and action drawings in my next book, Skin of the Night, which picks up where the last book left off. You will see the influence the comic book community has had on me, a community which has also embraced my work. I am grateful of that.

DKN: Do you find it challenging to take on both writing and artistic duties or would you say it’s more creatively liberating?

RC: All of the above! I enjoy having full creative control, but it’s also difficult to maintain creative momentum when there are writing or drawing blocks without having a team of people to light a fire or spark inspiration. I’m lucky to have a solid fan base that keeps telling me they are looking forward to the next book when I have self doubt. I do what I do with these books for myself, but it helps that people actually want to read my stories. 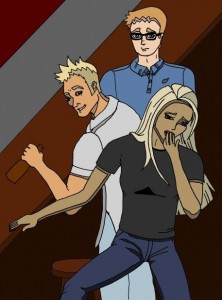 DKN: Do you see this as an ongoing or do you have a finite number of books planned?

RC: It will be a finite series, with the number of books yet to be determined. I also have a spin-off prequel series planned that goes into more of an origin story with a lot of historical fiction. When the present storyline was presented in novel format with the backstory included in a non-linear fashion, my beta readers who were more interested in the current storyline lost interest. I’m saving all the ancient North Africa, Viking, and Swiss Renaissance stuff for the spin-off.

DKN: Since we’re running this interview on a Batman themed site, I would be remiss if I failed to discuss that subject with you. What is your favorite Batman story?

RC: As I don’t have much comic book experience, I don’t have a favorite Batman story. My favorite interpretation of the comic books is the Batman television series from the ’60s. It’s colorful, campy, and just plain fun. This past October, I came in third place with my Burgess Meredith inspired Lady Penguin cosplay. I used to play Batman villains with my friends on the playground in elementary school. My best friend always got to be Catwoman but she graciously provided me with a rubber toucan nose to play Penguin. I would take a straw from the cafeteria to use as a cigarette holder to complete my look. 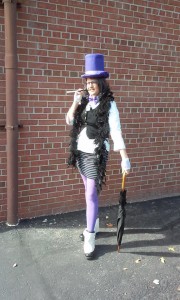 DKN: You once told me Adam West is your favorite live action Batman. What do you think elevates him above the rest?

RC: This is where it gets confusing. I think my favorite portrayal of Batman was actually Michael Keaton with credit to Tim Burton. It may be because he was my first exposure to Batman during my childhood: the rubberized suit, black and yellow, and dark eye makeup. His portrayal as a rich loner without a Boy Wonder also appeals to me. One feels sorry for him. There is an isolation and melancholy there that I appreciate but wouldn’t have worked in the old TV show. Michael Keaton’s Batman left an impression on me.

To learn more about The Sick Rose Vampires, please visit the official website.