The DC Icons line of action figures is truly a sight to behold. The first wave of these recently released collectibles includes Deadman, Green Arrow, Mr. Miracle, and the one we are currently examining, Batman. Designed by the incomparable Ivan Reis, one of my favorite artists whom I had the privilege of meeting earlier this year, and sculpted by Paul Harding, these six-inch figures are meticulously detailed and are able to assume a variety of poses. Seeing as how they bend at key anatomical joints, whimsical collectors should have no trouble mimicking some of their favorite comic book panels. 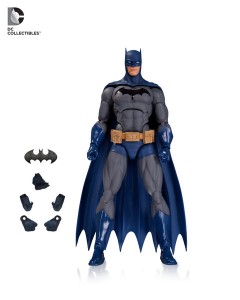 As we take a closer look at the figure, it becomes obvious that it’s based on a pre-New 52 design (more on that in a moment). Fans like myself that appreciate the dark blue and grey look should be more than thrilled with this miniature Dark Knight. Sometimes figures don’t always look like the work of an artist that they are meant to bear likeness to, but I must say this beauty really looks like the work of Ivan Reis brought to life. Well, about as much as an inanimate object can. And how can you not love that stern facial expression?

As far as accessories go, it comes with two batarangs, a grapnel gun with a thread attached to simulate a wire, and a pair of alternate, interchangeable hands if you feel so inclined to make your figure strike an action pose. 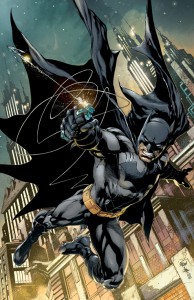 Now, let’s talk about the inspiration for this figure as I alluded to it earlier. Interestingly enough, it’s taken from Last Rites. For those unfamiliar, Last Rites was the period that bridged the gap between Batman RIP and Battle for the Cowl, spanning several issues of Batman, Detective Comics, Nightwing, and Robin. It told a variety of stories, beginning a brief era that saw a Gotham City without a Batman. While Reis didn’t contribute to this mini-event and is mostly known to Batfans thanks to his now iconic variant cover of Batman #3 (New 52; pictured left), I doubt that anyone will complain about his involvement.

With the holiday season rapidly approaching, Batfans, as well as those looking to purchase a gift for Batfans, can’t go wrong with this one. It will look handsome when adorning the shelf of openers and non-openers alike.

Even More Clips for ‘Gotham’ S2E8, ‘Tonight’s the Night’