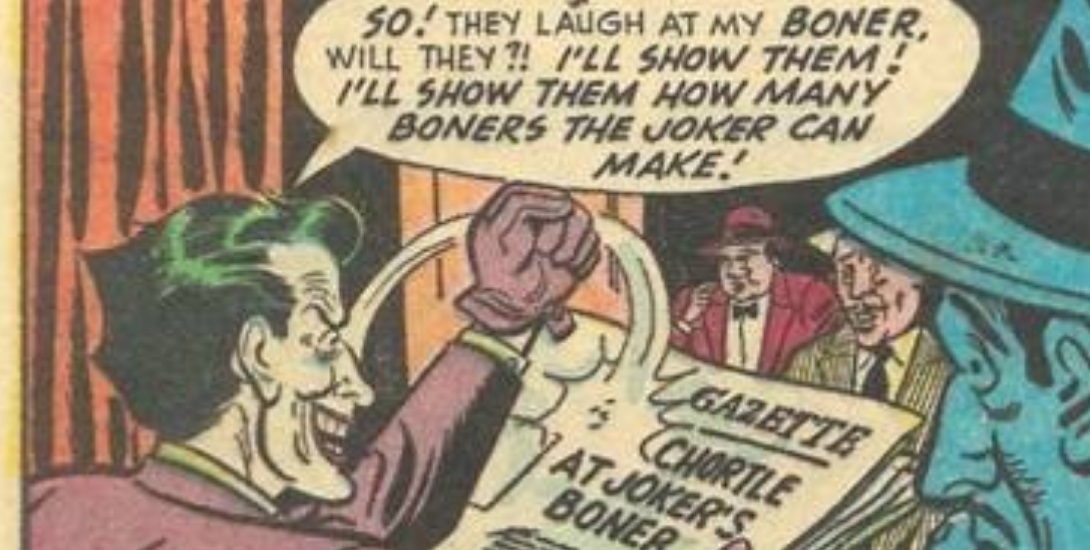 It’s a been a short while since we have done a “DKN Remembers” column and do we ever have a good one for you today. Here’s the long and short of it: context changes over time, especially with slang. The comic book medium is in no way immune. A word that was once used to describe an “error” or “folly” is now used to describe a penile erection. And does it ever lend itself to an entertaining read. We invite you to join us as we “Chortle at Joker’s Boner.”

When Bill Finger penned “The Joker’s Comedy of Errors” (Batman #66, 1951), he simply wanted to tell a story about the Joker turning history’s great mistakes into amusing crimes. It’s possible that you have seen panels from this story online having to do with the Joker’s Boner. Again, this is not the same kind of boner you would see him brandish as in a movie directed by Axel Braun. Decades later, the terminology not only makes us giggle, but the way it is used makes it legendary. 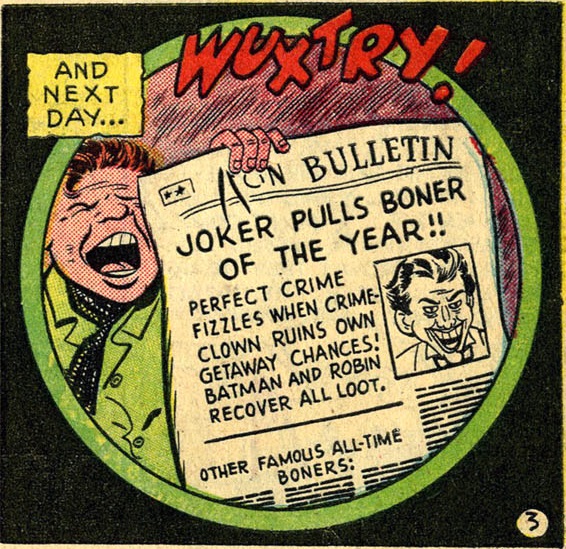 Now, wouldn’t you say that would be interpreted somewhat differently in 2015 than in 1951? The fact that it was the single greatest boner of that calendar year is quite impressive.

Maybe if the citizens of Gotham would have simply let it go, the Joker may have gone about his merry way. But no. They just had to chortle. How could you not expect the Clown Prince of Crime to ejaculate (definition: to say something quickly and suddenly) right where he sat?

Intent on making Gotham City feel the thrust of his plight, this is when the Ace of Knaves put his plan into action. Boner crimes would soon be the talk of the town! 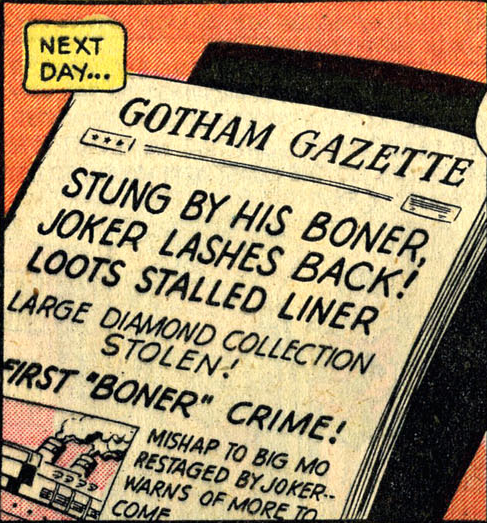 You can imagine that Gotham really took it on the face after this one. To make matters worse, the Joker plans to force Batman into a boner! Holy cannoli! 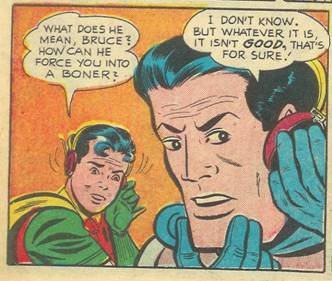 Before we continue, I’d like you to do something: start reading these panels – and eventually the story itself if you get around to it – as a drama voiced by the cast of Batman: The Animated Series. I want you to feel Jim Gordon’s genuine concern as Bob Hastings frantically shouts how he’s “worried about the boner he’s readying for you!” 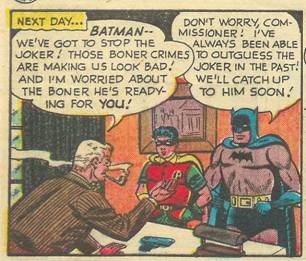 As the end of the story nears, two things are certain: 1) Batman will foil Joker’s plot and 2) one in five boners will not work as planned. 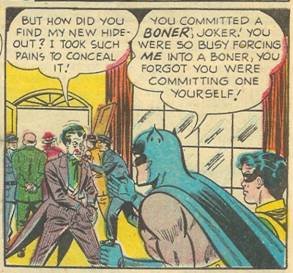 Writing about this subject has been tugging at me for a while, so I’m glad I got it out of my system. If you are unable to locate a copy of Batman #66, fear not because this story can be found in The Joker: The Greatest Stories Ever Told trade paperback.

Tags:batmanjokerthe joker's boner
share on: FacebookTwitter Tumblr
previous article
A Podcast For All Seasons: S2E9 – Rise of the Villains
next article
Jesse Eisenberg on Lex Luthor