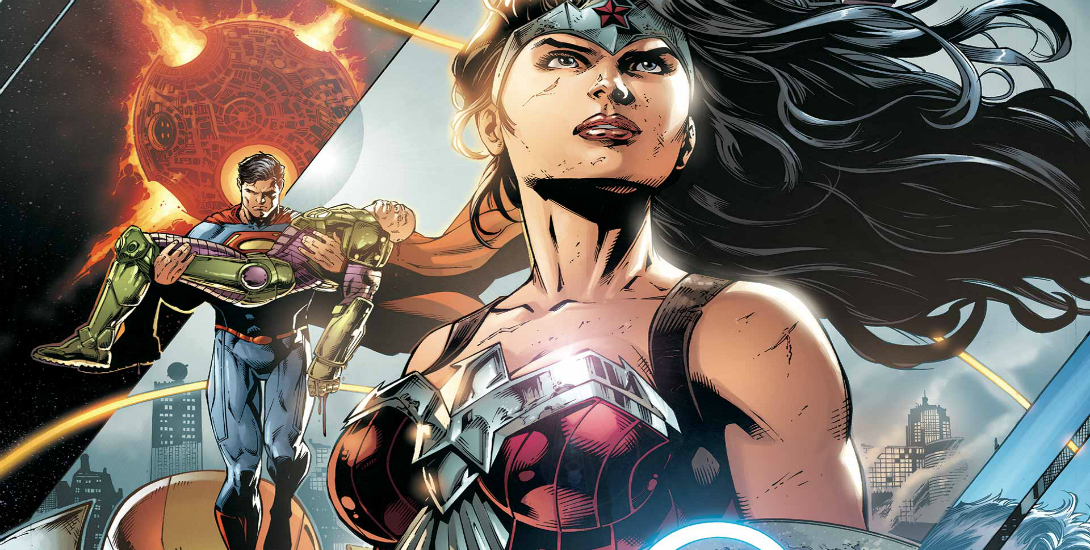 A God, or rather an Anti-God has appeared in the skies of Earth bringing hell fire and brimstone with him. The Justice League are the only people standing in his way, but they may not have what it takes to bring him down. Who is Myrina Black? Why is she so important? All these questions and more are answered in this month’s issue of ‘Justice League!’

I feel like I should clear up/clarify a couple of things right off the bat. I’m a human, which is something an alien would say; I feel, and thus I make mistakes. My biggest mistake regarding my last couple of reviews are pretty simple and therefore, dumb. I had said that Darkseid’s daughter had been the child that was passed to The New Gods a millennia ago and that Mister Miracle was definitely part of the mix, but I wasn’t really sure where he fit in. Ok, so Darkseid’s daughter aka ‘Grail’, as we learn in this issue, is the daughter of Darkseid (duh) and an Amazonian warrior that shall remain nameless until we cover that in the next part of the article. Spoilers. Mister Miracle was, in fact, the son that was sent to Darkseid via The New Gods. He survived decades on Apokalypse despite its inhabitants doing their best towards the contrary. Therefore, giving him the name Mister Miracle. Get it? Good. I’m sorry for the mistake, it won’t happen again. I love you.

Now that that’s over with and done, we can talk about the issue at hand. The issue starts with the arrival of the almighty being known as The Anti-Monitor. He brings Hell with him, and Grail, his protege/Darkseids’ daughter (I covered this in the paragraph above– Alec ‘Ass-hat’ Ward!) has ‘blossomed’ into a blood thirsty warrior that only the death of her father will quench. Meanwhile, Mister Miracle is under the watch and care of Myrina Black, a mysterious woman that the best of Apokalypse’s assassins are on the hunt for. As the Justice League’s only member without a ‘Y’ chromosome stands her guard against the forces that be, the battle is interrupted by the arrival of Mobius, the watcher. Answers are revealed and things are brought to light and a member of the league gains an ‘Almighty’ status change.

I usually don’t tackle spoilers in my review, but it’s going to be tough talking about the issue in detail without a spoiler warning. THERE BE SPOILERS AFOOT! ENTER AT YOUR OWN RISK!

Superman is dead and nothing will ever bring him back.

Not really, I just wanted to make an impact. Actually, Superman is quite alive, only he and ol’ Lexie are on the planet Apokalypse. As said in the paragraph above, there were some answers, uh, answered and some new pieces of information brought to the foreground in this issue. For starters, Darkseids daughter is actually named Grail. As in ‘Monty Python and the Holy’. The other very important piece of intel that we receive is that Myrina Black is the Amazonian warrior that had had ‘relations’ with Darkseid so long ago, and mothered the warrior Grail. Now that we are all caught up, here’s what I thought of the issue. Honestly folks, and I’m not too honest too often, I thought this issue was a bit above average. There were some really cool moments, sure. Like seeing Anti-Monitor in all of his glory just basking in the fear from the people of planet Earth was super cool! That being said, there just wasn’t enough here for me to really go over the moon about. I wouldn’t be doing a decent job reviewing this issue if I didn’t talk about the big elephant in the room. In this issue, we find out that the source of all of Mobius’ information about the entire multiverse lies within the chair that he rides to and fro. Remove Mobius, the information stays in the chair. So, at one point in the issue, Wonder Woman removes Mobius from his recliner, and in a split-second decision, Batman jumps on the chair granting him UNLIMITED POWAH, and unlimited knowledge. I don’t like this, I don’t like it one bit. I realize that here at DKN we are supposed to be all on-board when it comes to our savior, the dark knight, however, it was completely out of character for Batman to just jump on the chair without hesitation, despite knowing for sure what the chair could do. Also, he then asks the chair what the real name for The Joker is, AND IT TELLS HIM! This implies that Batman definitely knows the true identity, and that means we will know in the future, which totally works against the fear of the character.

Aye, aye, aye! Despite that complaint, the issue did have a couple of cool moments, but nothing for me to truly get stoked over. It was a nice continuation for the story, even though it seemed that there was a bit of an information dump at the end.