If you’re a Batman fan like me, and are partial to contemporary video games, then you’ve probably played Arkham Asylum, Arkham City, and Arkham Origins at least one or more times each, but before I claim to have truly completed these games, let us reconsider the meaning of “completion,” specifically with regard to open-world or sandbox style games.

Typically, one might consider the completion of video game to entail merely reaching the end of the storyline, witnessing all of the cutscenes/CGI movies, getting to the end credits, or defeating the final boss — something like that, right?

Well, open-world and sandbox style games typically allow for free-roaming traversal of a massive game world — in our case, Arkham Knight presents gamers with the massive world of Gotham City, which many have claimed is five times the size of the sprawling mega-prison city of Arkham City; throughout such a massive world, the player would have to search for and complete various quests to make progress in the game, and to ultimately complete it.

To try to keep it concise, and to prevent myself from preaching to the choir (the gamers out there) a bit too much, I’ll just say this: If you desire to experience the real ending to Arkham Knight, you need to achieve 100% game completion, which means that you must not merely complete all story missions/main quest missions, but you must also finish all secondary and miscellaneous missions, which, in turn, entails that you must solve all Riddler riddles, and find all of the Riddler’s hidden trophies.

So, retrospectively thinking and speaking, I guess I never truly completed the Arkham games.  I mean, yes, I completed all story missions and secondary missions for Asylum, City, and Origins, but I am rather certain that I never discovered all of Riddler’s hidden trophies, and never solved all of his riddles.

Here’s what Kotaku said about the issue:

Once the credits do march across the screen, Arkham Knight divulges a new, more annoying surprise: If you want to see the full ending, Batman will need to hunt down everyone in the game, take down every watchtower, eliminate every guard station, collect every one of those Riddler trophies you’ve been trying your best to ignore since 2009.

That egotistical, narcissistic, self-indulgent, obsessive, attention-seeking, insane…that guy, the Riddler…what a guy.  He clearly has obsessively dedicated his entire existence to attempting to best the Batman.  Hundreds of trophies…hidden in every conceivable nook and cranny of each game.  Ironically, the hunt for Riddler trophies indubitably appeals to the obsessive compulsive disorder that nestles itself deeply in the recesses of all of our subconscious minds.

Let’s think for a second about particular numbers that pertain to the Riddler’s challenges in each game.

I believe I can conclude that 243 Riddler challenges isn’t such a massive number of things to do or find, especially in comparison to Arkham City‘s steep 440.  At the end of the day, I have to admit that, despite how daunting the number of Riddler challenges might seem, I have grown to love that despicable genius and his sadistic ways.  He’s been verbally abusing and insulting me (or Batman) for so long, and rewarding me (or Batman) with little green trophies shaped like question marks, such that I’m trapped in a never-ending relationship of abuse and affirmation with him. Perhaps the Riddler is correct when he tells Batman that, to paraphrase, he’s glad the Joker is dead, because he, the Riddler, is Batman’s true nemesis, the one who challenges his intellect.

Regardless, don’t forget to solve those murders, save those firefighters, deal with bank robberies, and all that other jazz (which is unrelated to the Riddler) if you wish to achieve 100% completion and the true ending to Arkham Knight.  Overall, this can be seen as a good thing, particularly when you consider incentive to keep playing, especially during what some gamers like to call “post-game.”  So beat Arkham Knight, then keep beating it.  Enjoy…unless you’re playing on PC right now, and are suffering from the glitches everyone’s complaining about.  My sympathies go out to you. 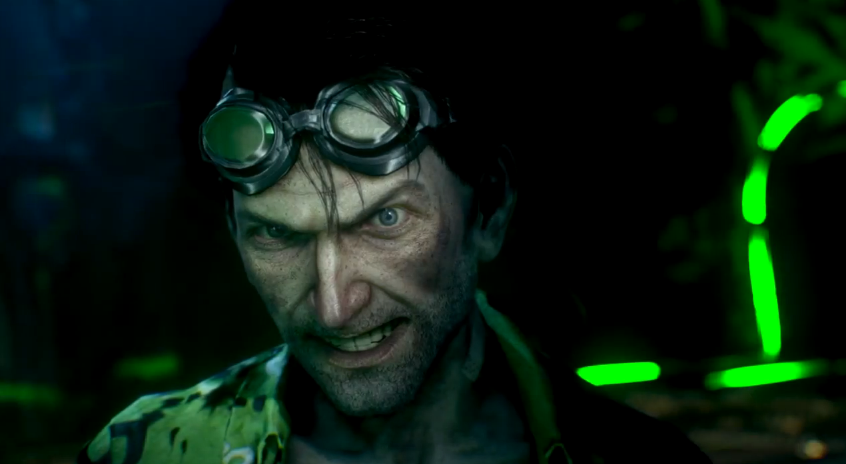 Exclusive: Catching Up with Cradle of Filth’s Lindsay Schoolcraft