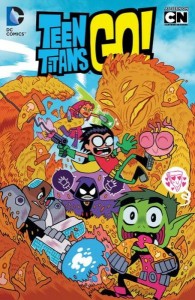 When it comes to the animated TV series Teen Titans Go!, it seems fans either love it or hate it. Considering its comic book counterpart captures that exact tone, your opinion of it will likely be the same. Honestly, I don’t like the show, yet decided to give the comic a chance.

Those familiar with the show know it’s less about superheroic adventures (though they do tip-toe the line in here) and more about wacky hijinx. If you want some Judas Contract look elsewhere because this is inspired by the same show that features superheroes singing about pie. In fact, the first thing in this book you’ll see is Cyborg singing about a sandwich. Heck, they’re even fighting a pizza monster on the cover!

I will say that this book benefits by having Sholly Fisch, one of the modern masters of writing all ages comics, as part of the team. Expect brief adventures that feel more self-contained. After all, this is geared toward younger readers who may not collect every issue of a particular series.

I outright admit this book wasn’t my cup of tea, but fans of the TV show should check it out regardless of whatever score I give; I’m just not sure that I can recommend it for anyone else. It does make a perfect gift for young readers who love its small screen brother. To completely shun this book would be a disservice to those who put so much creative energy into it. Score: 6/10