Synopsis: Don’t miss this special issue that loops our story all the way back to where it started in BATMAN #28 – but with a twist you won’t see coming! 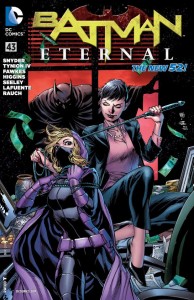 The debut of Harper Row’s Bluebird continues in this week’s Batman:Eternal. Harper first suited up at the end of issue #41 and has made most of the pages ever since. If you’ve been reading Dark Knight News’ reviews on Eternal, you can get the vibe that I’m not exactly sold on the character. I am always hesitant on new characters being thrown at us, and I don’t think the Bat-family needs to be extended any further.

That changed, just a little, this week. We pick up (eventually) where we left off last week where Stephanie Brown, a.k.a. Spoiler, was kidnapped by Selina Kyle. Bluebird teams up with the Dark Knight himself and saves her, despite Spoiler’s hesitation. She doesn’t trust Batman and it’s only at the end of the issue, with Harper, when she explains why. Their conversation is what pulled me toward supporting the idea of a new member of the family.

I don’t have a great deal of Spoiler knowledge on me, but the character has never rubbed me the wrong way. Credit that toward the authors, artists or just the character herself. Harper I was never on board with because I just felt like she was forced. We were expected to like her from the get-go. I will never disagree with Scott Snyder (who created her), but that doesn’t mean I’ll follow all of his decisions (actually this is/was the first one I wasn’t on board with). That changed this week as her ego and attitude was pushed aside, and we saw a normal side to her. That’s a side I liked.

Overall with this issue, we didn’t get a whole lot on the Batman front. He made his appearance, helped save the day and moved along. But what we did get was a different side to a new character, thanks to writer James Tynion IV and artist David Lafuente. It’s a side I hope we see more of in the remaining 9 issues of this title.