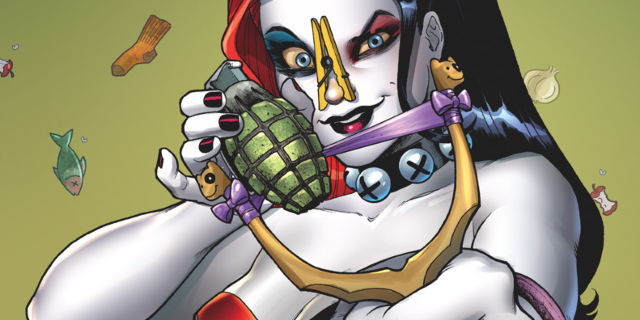 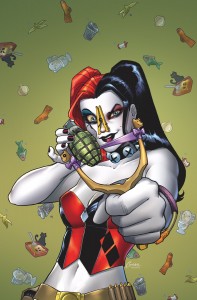 This week sees the release of the much hyped and anticipated Harley Quinn Annual. Yes, it’s the “rub and smell” one that you’ve heard about. Did I smell it? No. That’s something I’m not into, though this book was enough of a fun read that I didn’t need that element to enjoy it. If it appeals to you, knock yourself out. And yes, the copy I received was the one containing the scent of “cannabisylocibe 7-A”. Being straight edge, I especially didn’t care to take in that particular scent.

Annuals don’t always retain creators from their monthly counterparts, but luckily Amanda Conner and Jimmy Palmiotti elected to write this issue, so it keeps the tone they’ve already set. John Timms provides some fitting, handsome artwork that felt right at home. He wasn’t the only artist to contribute, which I will detail shortly.

The narrative follows Harley who decides to break into Arkham Asylum to rescue a recently captured Poison Ivy. Not long after being inside, she finds her botanical friend under the influence of some of the staff. It turns out that they have her working on some kind of chemical. Harley’s rescue attempt doesn’t go as well as planned and that’s when the aforementioned hallucinogenic chemical is unleashed. Everyone in the room is exposed and has their own wacky hallucinated adventure; they are explored as short stories within the main story, making this just short of an anthology book. Each one is brought to life by a different artist. Obviously, the Harley and Ivy ones are the standouts.

It turns out the villain of the piece isn’t really much of a villain and his intentions weren’t all that nefarious. I won’t spoil the details, though Harley and Ivy’s taunting of him was rather amusing. We get a rather happy ending that seemingly adds a new member to Harley’s supporting cast.

As I said earlier, this is a fun read regardless if smelling the pages appeals to you or not. Sure, $5.99 is a little more of a commitment than your average comic, but this is money well spent for any Harley fan. Score: 8.5/10