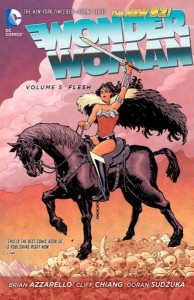 Wonder Woman isn’t a title that I’m able to read month to month, but instead catch up with collected editions. And it’s a title that I very much enjoy catching up on. In what I believe is the penultimate volume of Brian Azzarello’s masterwork that has redefined the Amazon Princess, he continues to deliver a character who is full of compassion, yet is a strong warrior that anyone can be inspired by, regardless of gender. Azzarello can be mentioned along with Gail Simone and Charles Soule as the best writers to touch Wonder Woman in the past decade, at least in my opinion. Cliff Chiang, Goran Sudzuka, and ACO all do a fine job of handling artistic duties. Perhaps the connective thread of colorist Matthew Wilson helped to streamline things, but I assure you that when artists switch between chapters it’s not jarring in the least bit.

This volume opens with the “First Born” one-shot from 2013’s Villains Month. It tells a sensational, detailed origin story that will familiarize even the uninitiated with the First Born character. Still, I highly recommend that you read the previous volumes instead of just jumping on with this entry. The narrative of the one-shot is guided by three urban oracles in slang speak. You’ll either be amused or annoyed by this. Surprisingly I was of the former.

When we get to the meat of the story, the major themes are Diana’s reluctantly adjusting to the mantle of God of War and an all out assault on Olympus being plotted from various directions. The politicking and quarreling amongst the family of gods is intriguing as ever. Apollo has never seemed more arrogant, nor has there been Minotaur that looked like he walked out of a fetish club more than in this book (pictured below). 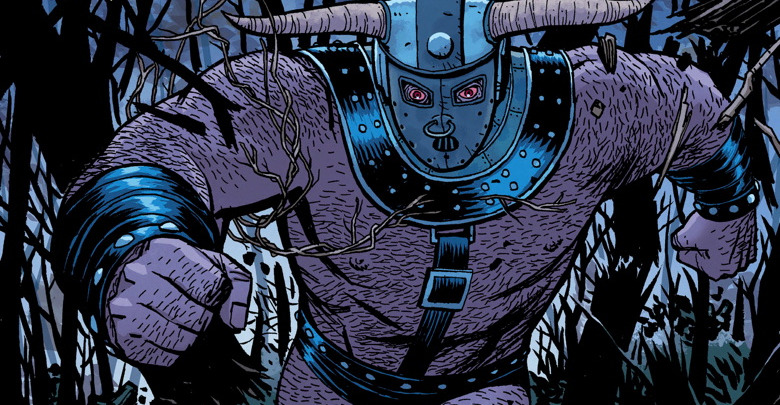 There are some major status quo changes in this book such as the death of a prominent god, Hera regaining her powers (her coping with mortality prior to this is one of the finest subplots), and the Amazons are made human again. The First Born is pretty much the lynch pin of the story and an epic battle with him is no doubt coming in the next volume.

Supplemental material includes a variant cover gallery, Cliff Chiang cover sketches, and a look at the art processes of both Chiang and Goran Sudzuka.

I would have to say that this book, more so than any one of Azzarello’s Wonder Woman tales to date, reads more like it’s part of a whole rather than a standalone. It’s good stuff, but just not entirely friendly to new readers. While also not being the strongest volume, it’s still one of the best books in The New 52. Score: 8/10

Review: Batman Vs Bigby: A Wolf In Gotham!...