Never said 16 issues is the end of my Batman. My contract is up in 16 issues. I may do Creech or a might be dead. Who knows? 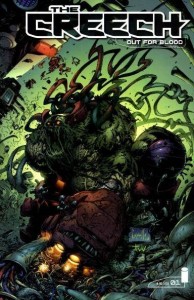 With sixteen more issues to go that means we will still have him for Batman for two more years. With what we have seen him do in the past Batman issues to the present I have seen a great deal of improvement.  I’m glad we still have him for sixteen more. Do you think DC Comics will try and work another deal with him or do you think they will get new blood  for Batman? With him saying he might do “The Creech” I think he might be ready to move on again to another challenge. On a side note if he does plan to work on his creator=owned Image title “The Creech” he will have Scott Snyder writing the story.