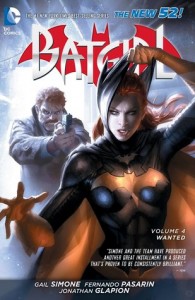 When you immerse yourself into the world of Batman, it’s hard not to become enamored with many of his sidekicks and supporting characters. Everyone has their favorites, be they Robin, Alfred, Nightwing, or Batgirl, who is the focus of the review you’re currently reading. I’ve always loved the concept of a female donning cape and cowl to join the fight on the streets of Gotham and while several have adopted the name “Batgirl”, my personal favorite has always been Barbara Gordon. I’m aware many loved her as Oracle, the wheelchair bound computer genius, but I was personally thrilled to see her back in the habit (not a reference to Sister Act 2) with The New 52 relaunch.

Much has happened to Barbara in the time that has elapsed since the relaunch. In this fourth volume, we find her descending into a deep depression after accidentally murdering her serial killer brother, James Gordon, Jr. She now sees herself unworthy of wearing the Bat symbol and actually removes it from her costume. Not only that, her actions have caused her father, Commissioner Jim Gordon, to vow the arrest of Batgirl (hey, the book is titled “Wanted”). Gail Simone has done a good job of making each story arc markedly different from each other and this one is quite the emotional roller coaster.

We are also introduced to a new interpretation of the Ventriloquist in this story, a true psychopath name Shauna Belzer. A glimpse at her childhood is offered at the beginning of the book, which is expanded upon much later. She is very different from Arnold Wesker. While she does seem to have the affliction of a split personality like he did, that’s where the similarities end. She is not a mob boss, rather a vicious killer with metahuman powers that takes the art of ventriloquism seriously, often to grotesquely violent extents. I’m highly indifferent when it comes to this new iteration, but it gives Batgirl another much needed contemporary. The Ventriloquist Villains Month one-shot is also included. The exploration of her origins is enjoyable, but the scenes in the present were not so much. There were also some bits that were meant to tie in to Forever Evil that felt rather forced. It’s a good thing that I was chewing gum while reading this because the one-shot left a bad taste in my mouth and was easily the weakest inclusion.

With so much darkness, the lighter scenes showcasing Barbara’s personal life were entertaining and more than welcome. They aren’t superfluous and are woven into the larger tapestry, which makes some of the moments toward the end of the story really feel like a punch in the gut, but in a good way; Simone makes you feel Barbara’s pain. I won’t say much more than I have to, but she will find a way to become just as angry with her father as he is with Batgirl. I felt the “Wanted” concept was such an interesting approach and there are many riveting moments involving father and daughter Gordon. It all builds to a conclusion that is satisfying on many levels with a twist that will make you anxious to read the next volume. 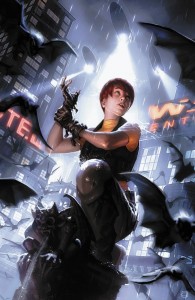 My favorite chapter has to be what was originally printed in Batgirl #25, a Zero Year tie-in. It’s a great tale that spotlights a Barbara that is several years from becoming Batgirl, yet is no less the hero. Furthermore, she is found to be an incredible leader and an inspiration to those around her as she braves a horrific storm with the goal of protecting her brother and “homestead”.

This book makes for a wonderful gift for any Batgirl fan. Gail Simone is one of the best in the industry when it comes to writing female superheroes, but she just knows how to write for Barbara Gordon. Fernando Pasarin does a valiant job on pencils and Jonathan Glapion’s inks convey an atmosphere that will make fans of Scott Snyder’s flagship Batman title feel right at home. Glapion did, after all, ink several arcs of Snyder’s book. All artists involved depict Batgirl with such grace, especially when she kicks; it’s hard to not evoke images of Yvonne Craig on the ’60s TV show. You also can’t go wrong with those eye-popping covers provided by Alex Garner. It sounds cliche’, but your Batgirl collection is incomplete without this book. Score: 8/10