Producer James Tucker confirms two characters for Batman: Assault on Arkham, DC’s upcoming animated feature based on the wildly popular Arkham series of games. Considering the fact that DC’s animated features have been head and shoulders above Marvel’s and even some of the DC live-action movies, it makes sense that DC would want to start focusing heavily on that division of their brand. As far as I’m concerned, they’ve always been great, but I want to say that I can pinpoint the moment they realized what they had on their hands. I’d like to say that it was with the release of their adaptation of Frank Miller’s Dark Knight Returns. Personally, my world shattered after viewing that flick. They took this highly coveted source material and somehow made it better, elevated it. It currently stands as my all-time favorite Batman movie, live-action or otherwise. As someone who enjoys pinching his pennies, especially for something as unnecessary as Blu-rays, I was willing to overpay to own this movie on home media. Regardless, with Justice League: War coming out, DC’s strategy has shifted into more aggressive production and planning, establishing a shared movie universe and doing special one-shot crowd-pleasers. Aside from the in-continuity Son of Batman, scheduled for May 6, we’re also getting Assault on Arkham, a one-shot out-of-continuity Batman story based on the popular Arkham series of games. Since nothing has yet to be revealed about it, any news on it is definitely worth reporting. In an interview with producer James Tucker and designer Phil Bourassa, Tucker was asked about which action figures he’d like to see released for characters from their animated catalog. To which he replied: 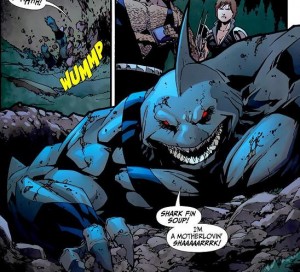 Now, Harley Quinn was a given considering her presence in the Arkham series, but King Shark was wholly surprising. For the uninitiated (like myself), King Shark was introduced initially as a Superboy villain, he is a humanoid shark, that’s not too dissimilar to Killer Croc. Not to be confused with Warren White, Great White Shark, who is a disfigured criminal who sharpened his own teeth. I’m pretty curious to see how they re-design King Shark from his already monstrous visage. They might just take it a step further into the realm of reality as a genetic mutation. We’ll see. What do you think? Was it a good choice to include King Shark? Or would you prefer more tried and true rogues. Let me know.

Rumor: Batmobile Footage Shot in LA, May be the Only Element Retained in Goyer’s Batman Vs. Superman Script