This is currently only a rumor, so please keep that in mind folks. According to Comicbookmovie.com and Bleeding Cool News, the pilot of the new Gotham TV series will potentially focus on Martha and Thomas Wayne’s murder.

The article doesn’t give much info, probably due to the fact that there isn’t much info TO give just yet. Were they to start the series off this way, though, it would help keep the plot of the story a lot more open, and give its viewers more of a back story on Jim Gordon and Gotham itself.

It instead seems far more likely that the series will focus on a younger Gordon, starting the series with him investigating the death of Thomas and Martha Wayne. This would help keep Batman out of the equation and give the team behind the series a whole lot more freedom. 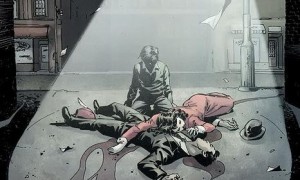 Sounds pretty good to me! How do the rest of you feel about a show with its center being Jim Gordon? If the directors are indeed going with the Wayne family deaths to start off, do you think it’s a good pilot? Or is it too much too soon? Let us know what you think!

Ben Affleck Candid on Bale, Daredevil and Why He’s Donning the Cowl