A while back, DC announced its contest to have amateur artists submit their own interpretations of the first page of an all-new Harley Quinn series, but was met with serious backlash when people took offense to the description of the fourth panel. It detailed Harley sitting in a bathtub with various electronic appliances hanging precariously over her head, while she sat there with a pair of scissors primed to cut the rope that was holding all of these appliances up. The page was released at a particularly bad time, as it turned out the following week after the script was released was National Suicide Awareness week. In addition, much of the backlash was about how the fourth panel was “sexualization of suicide,” drawing on the fact that she was naked in a bathtub. Here is the script written by Jim Palmiotti as it was originally released:

PANEL 1- Harley is on top of a building, holding a large DETACHED cellphone tower in her hands as lightning is striking just about everywhere except her tower. She is looking at us like she cannot believe what she is doing. Beside herself. Not happy.

PANEL 2 – Harley is sitting in an alligator pond, on a little island with a suit of raw chicken on, rolling her eyes like once again, she cannot believe where she has found herself. We see the alligators ignoring her.

PANEL 3 – Harley is sitting in an open whale mouth, tickling the inside of the whale’s mouth with a feather. She is ecstatic and happy, like this is the most fun ever.

PANEL 4 – Harley sitting naked in a bathtub with toasters, blow dryers, blenders, appliances all dangling above the bathtub and she has a chord that will release them all. We are watching the moment before the inevitable death. Her expression is one of “oh well, guess that’s it for me” and she has resigned herself to the moment that is going to happen.

While it is worth noting that most of the people who were outraged at this were women and most of the people who were fine with it were men, there is still the matter of the goofy, Wile E. Coyote-style methods she’s using to kill herself, which does at first seem to make fun of the serious matter of suicide. Later, however, Jim Palmiotti issued a statement apologizing for the offense, and provided more context for the page.

“That the tryout Harley Quinn page went out without an overall description of tone and dialogue is all my fault,” he wrote. “I should have put it clearly in the description that it was supposed to be a dream sequence with Amanda and I talking to Harley and giving her a hard time. I should have also mentioned we were thinking a Mad magazine /Looney Tunes approach was what we were looking for. We thought it was obvious with the whale and chicken suit, and so on, but learned it was not. I am sorry for those who took offense, our intentions were always to make this a fun and silly book that broke the 4th wall, and head into issue 1 with a ongoing story/adventure that is a lot like the past Power Girl series we did. I hope all the people thinking the worst of us can now understand that insulting or making fun of any kind was never our intention. I also hope that they can all stop blaming DC Comics for this since It was my screw up. The idea for the page to find new talent is an amazing one and we hope that can be the positive that comes forward from today on…that we get some new talent working in our field because of this unique opportunity.”

Here is the page as it was published this month: 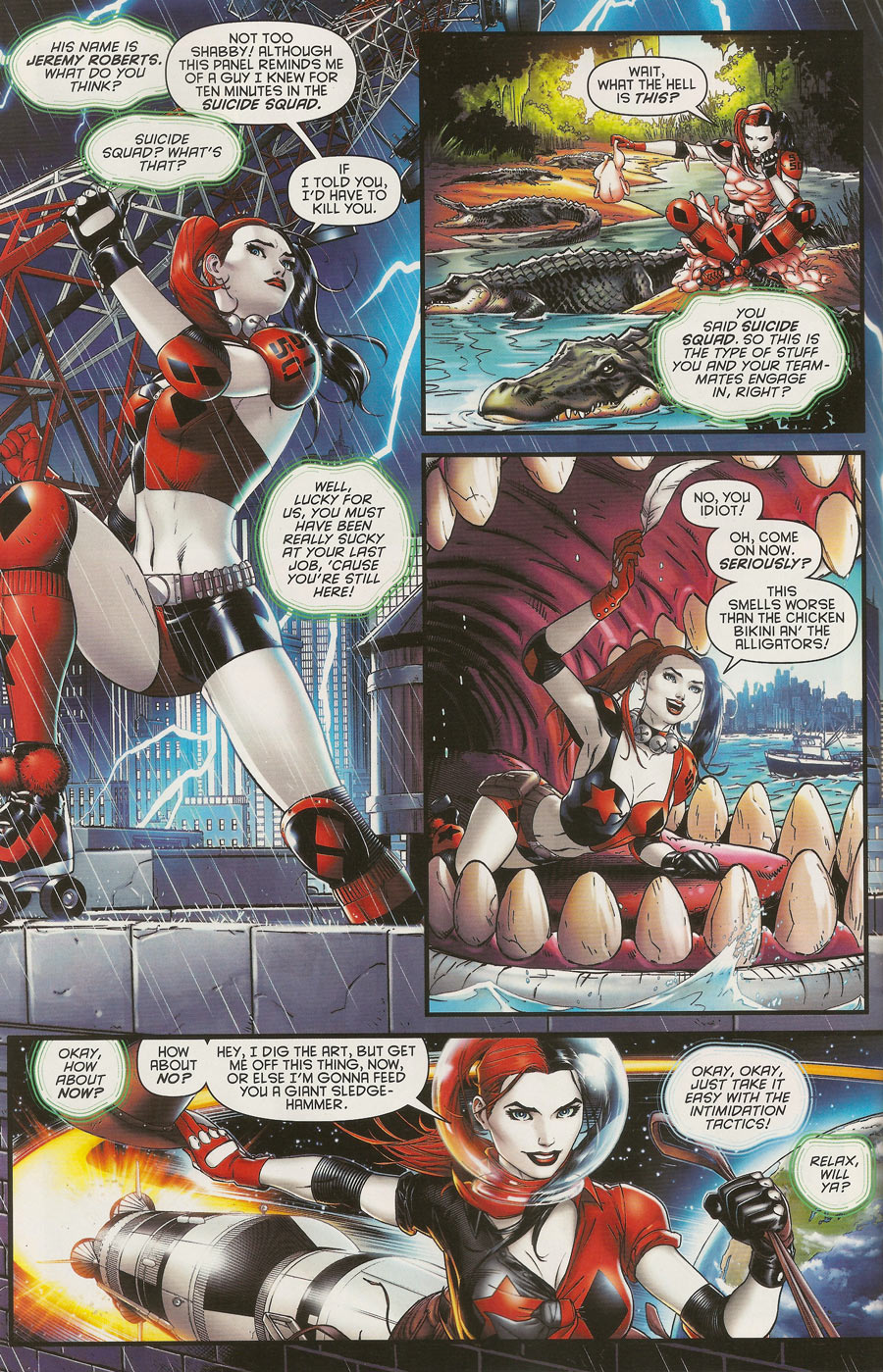 The controversial page, released this month in Harley #0.

DC Comics itself was forced to issue an apology as well after receiving a reprimanding statement from the American Foundation for Suicide Prevention, American Psychiatric Association and National Alliance on Mental Illness. They said that the contest had “potentially dangerous” themes and implications. “We believe that instead of making light of suicide, DC Comics could have used this opportunity to host a contest looking for artists to depict a hopeful message that there is help for those in crisis,” they wrote. “This would have been a positive message to send, especially to young readers.”

DC responded  by stating that “The purpose of the talent search was to allow new artists an opportunity to draw a single page of a 20-page story. True to the nature of the character, the entire story is cartoony and over-the-top in tone, as Harley Quinn breaks the 4th Wall and satirizes the very scenes she appears in. DC Entertainment sincerely apologizes to anyone who may have found the page synopsis offensive and for not clearly providing the entire context of the scene within the full scope of the story.”

The fact of the matter is, Harley has been a sexualized character since the beginning of the New 52, naked in a bathtub or not. In my opinion, none  of this would have happened if the description had simply said “Harley sitting in a bathtub…” excluding the word naked. But one can never tell.

Conan O’Brien Discovers a Leaked Scene from Batman vs. Superman