There can be no doubt in any fan’s mind that George Pérez ranks among the greatest comics creators of all time. The lucky few of us who have met the great man will also attest that he’s one of the kindest, warmest, nicest, and most genuine people on the planet… but it’s not only the fans who love him.

DC Comics has announced that every single comic they publish in June 2022, when George is set to celebrate his 68th birthday, will feature a double-page spread honoring his work for the publisher over the decades.

DC will celebrate the 68th birthday of George Pérez, one of the titans of the comic industry, with a two-page spread featuring some of his most beloved characters in each of its June periodical releases. Working from a layout designed by Dan Jurgens, some of the industry’s biggest names including Jim Lee, Walter Simonson, Alex Ross, Dave Gibbons, Todd McFarlane, Daniel Sampere, Jerry Ordway, Nicola Scott, and many more, collaborated on the colorful spread. 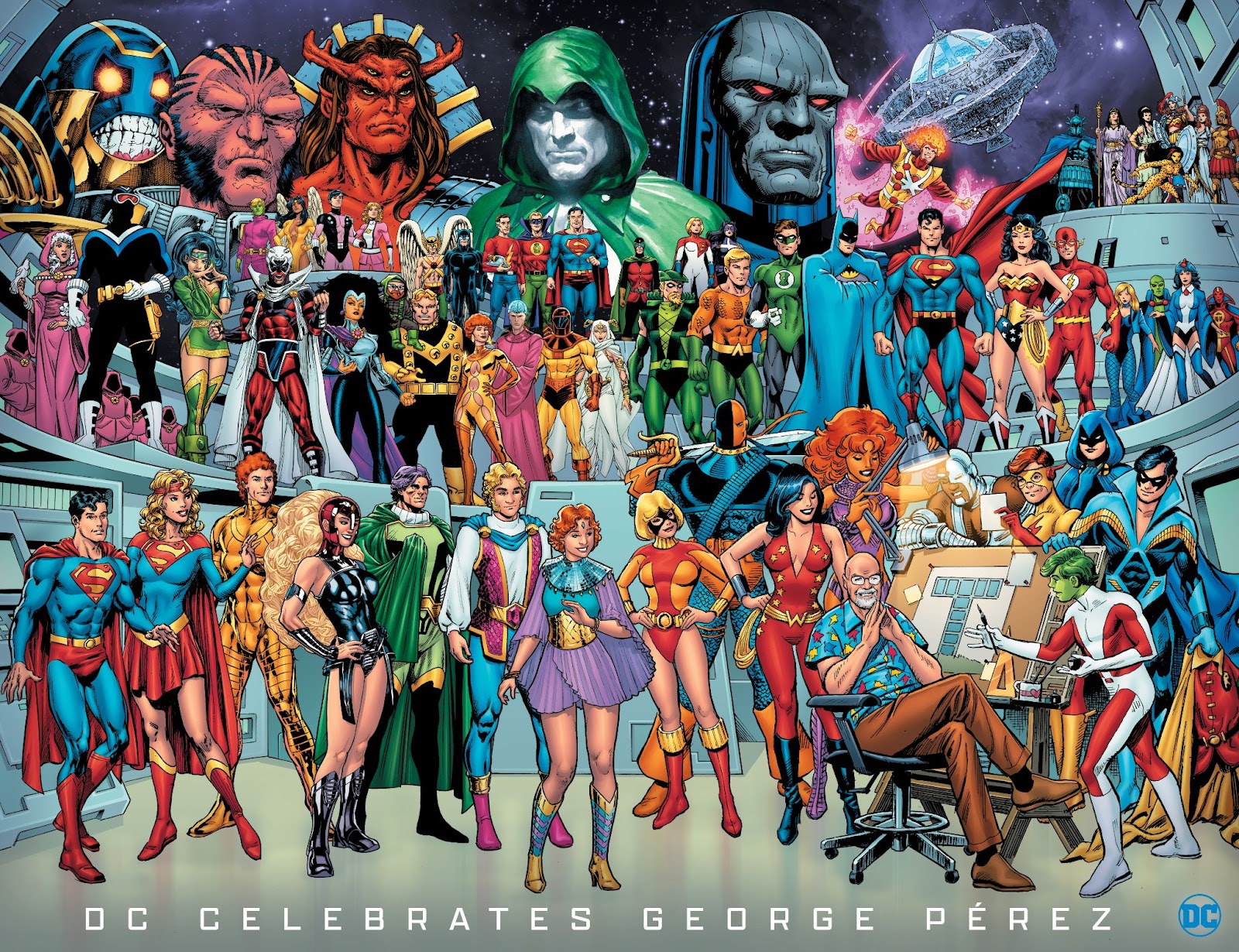 When I was asked to come up with a design and layout that would honor George Pérez and his many incredible contributions to DC Comics over the years, I was truly honored. I have admired George’s work since I first saw it and have had the good fortune to work with him in different capacities, on a number of projects. More importantly, I’ve been able to see the way George treats fans and readers, always smiling, gregarious and approachable. It was a joy to watch this cover come together and I’m sure everyone who contributed feels the same way.

The tribute features the following DC characters that Pérez is most known for, as well as the man himself, drawn by a number of the top artists in the industry and colored by Hi-Fi:

Accompanying the spread on a separate page will be a key highlighting the characters and artists that participated. 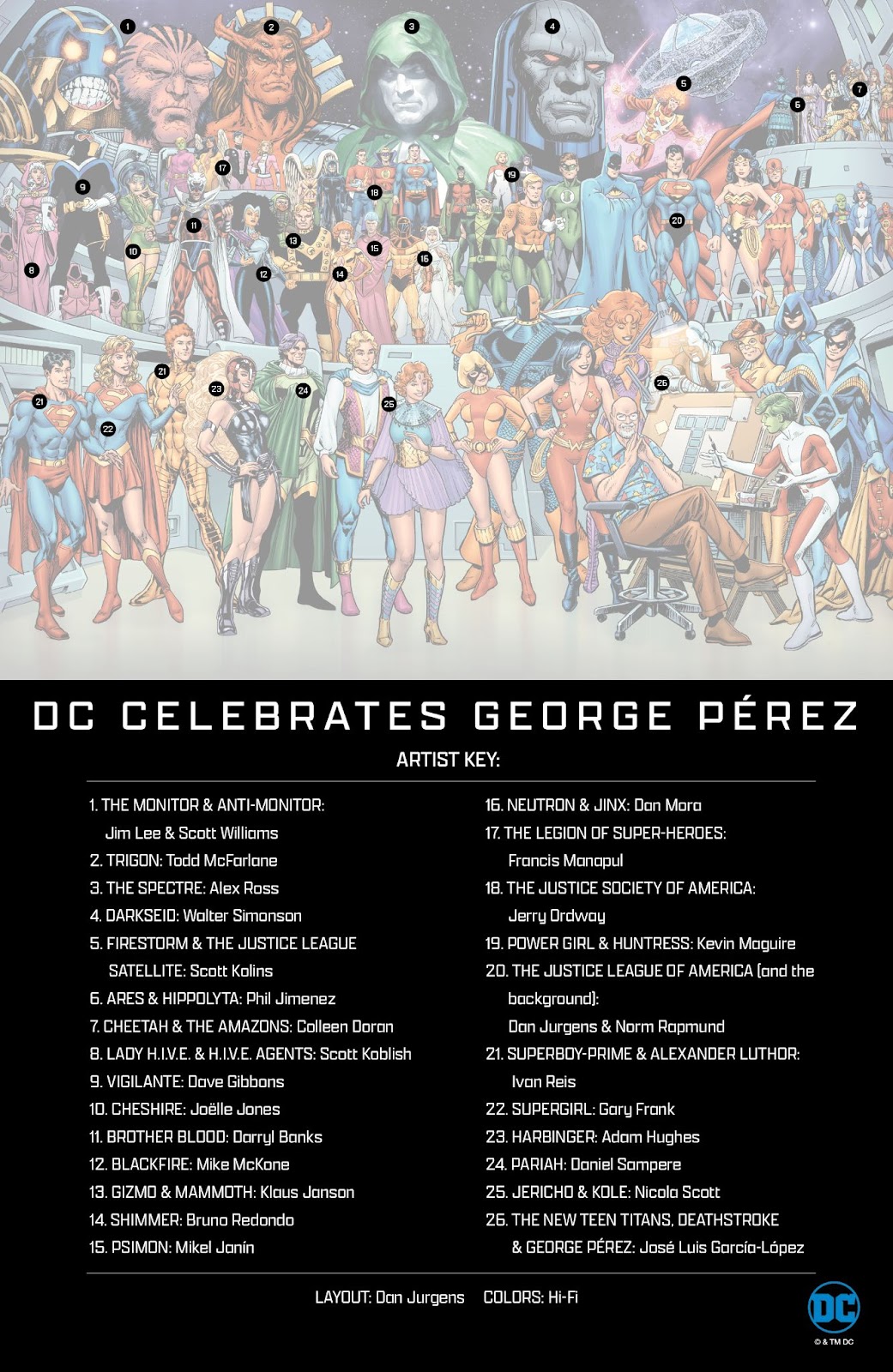 In addition to being included in all of DC’s June issues, the tribute will also be featured as a variant cover for Dark Crisis #7. Each issue of the event series will feature a cover highlighting a previous crisis event from DC’s history, starting with the genre-defining Crisis on Infinite Earths by Marv Wolfman and George Pérez for issue #1. Artwork and additional details on each of the covers will be announced at a later date.

George Pérez is one of my favorite comic storytellers of all time. To say he’s a ‘great artist’ is a massive understatement. His work on the original Crisis of Infinite Earths inspired so much of my love for DC Comics. When I saw DC editors pull together this incredible piece with so many amazing legendary artists celebrating George, I won’t lie, it was emotional. Now it’s an honor to have this tribute be a cover to Dark Crisis.

A special version of the Dark Crisis #7 variant cover will be available for sale by The Hero Initiative to raise funds for one of Pérez’s favorite charities. Pérez is a founding member of Hero Initiative’s board of directors and has served as chair of its Disbursement Committee.

Please donate to The Hero Initiative, and show your love for George by picking up a few extra DC books in June. Not only will it provide good karma, but you’ll also be getting some excellent comics too. Everybody wins!