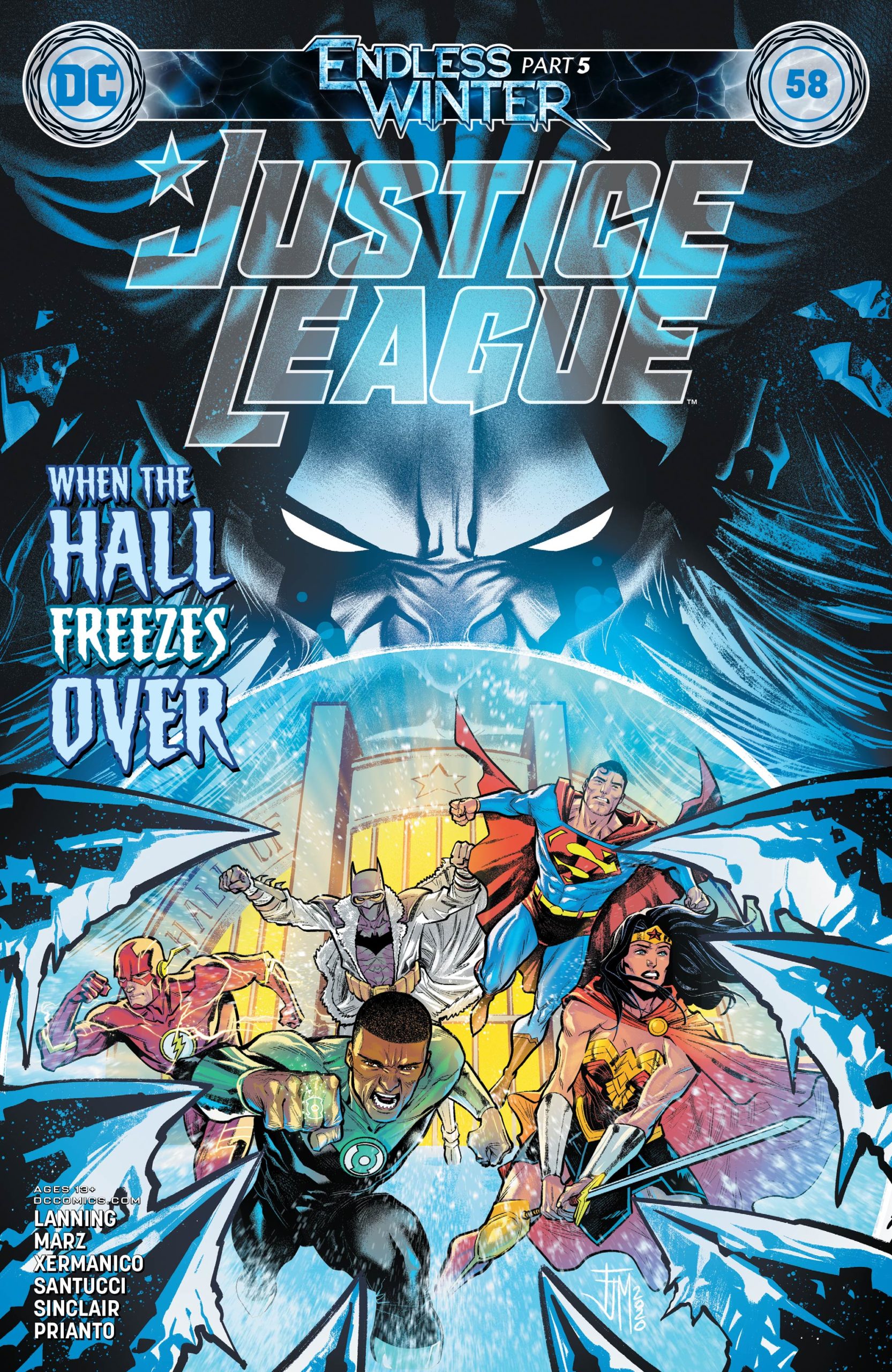 In case you’ve missed the memo, it’s cold – like really cold – in the DCU right now. During Justice League: Endless Winter #1, a group of corporate scientists went digging in the artic for the crystal remains of Superman’s recently destroyed Fortress of Solitude (See Man of Steel #4). However, this team managed to unearth more than a few crystals. They inadvertently freed an ancient imprisoned Norse Cheif turned Ice Elemental called the Frost King, unleashing a global blizzard of apocalyptic proportions.

In each issue of this crossover, there are two different running stories: a flashback and a contemporary narrative. The flashbacks focus on Frost King’s backstory and his war against Black Adam, Hippolyta, Swamp Thing, and Viking Prince. In previous issues, it was revealed that the Frost King went mad after witnessing the accidental death of his son, and in Justice League #58, Black Adam uses the remaining members of the Frost King’s family as bait.

Folks, this story is a big crossover – like 9 issues long – and man, does it feel like it? My biggest gripe about this story is not its concept but its execution. “Endless Winter” is the poster child for decompressed storytelling, as Andy Lanning and Ron Marz are taking their sweet time as they move from issue to issue. This story could have been told in a much more concise and less laborious format, but hey – DC wanted a band-aid event to cover them through December as Death Metal wraps up. So here we are with a nine-part story that’s slower than molasses in winter. 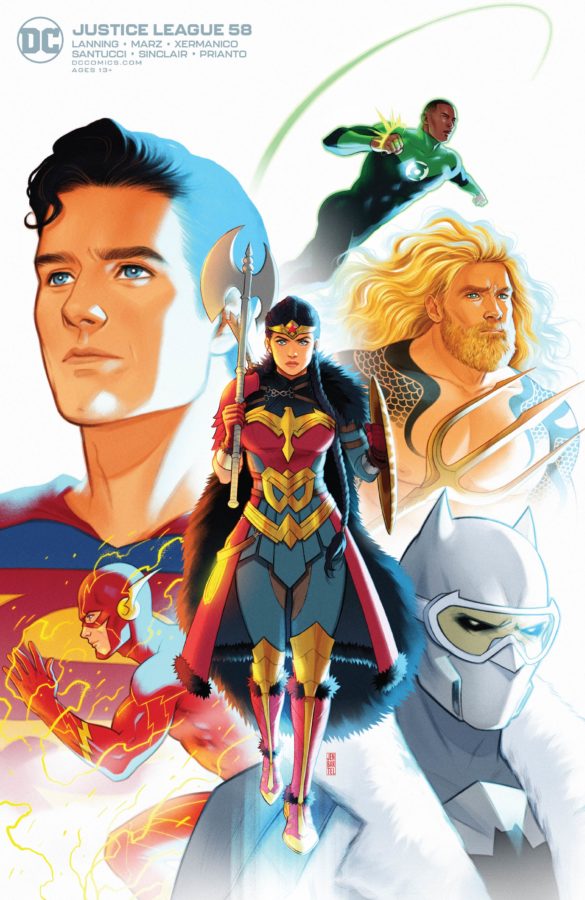 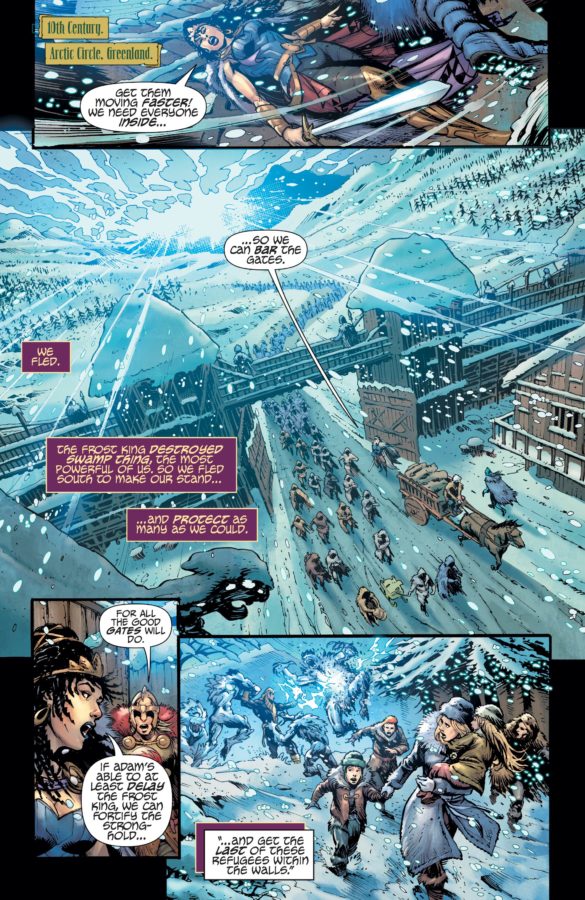 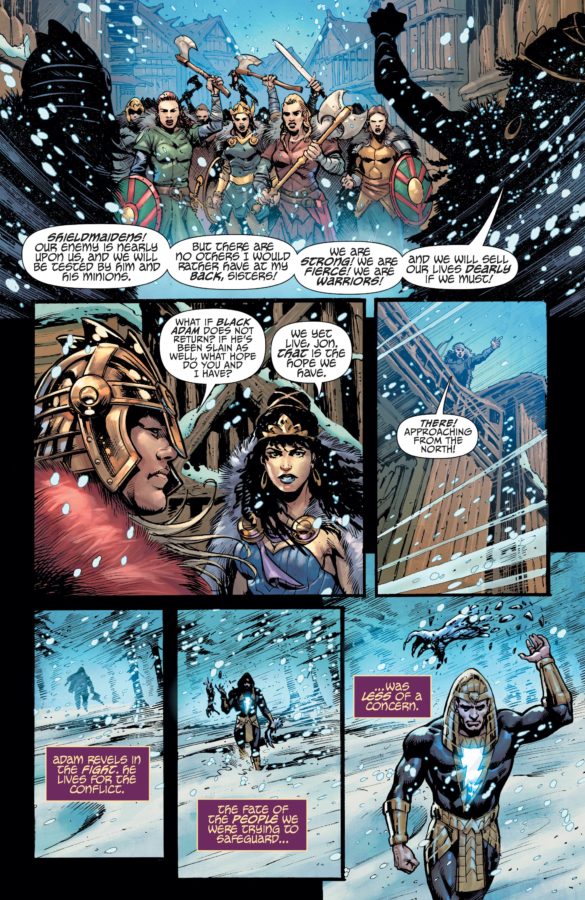 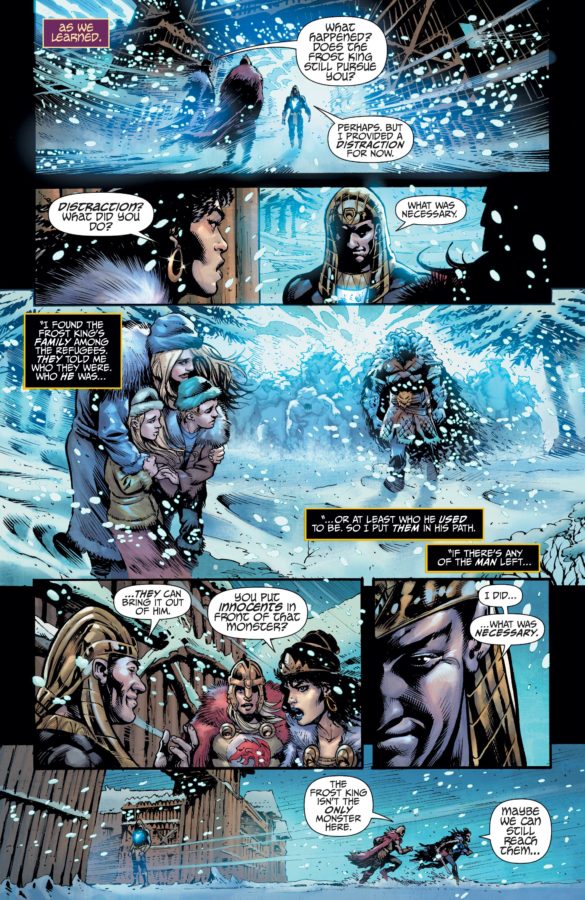 Yet, despite its pacing problems, “Endless Winter” does have its charming moments. Lanning and Marz are really great at dialogue. Seriously, these two really do a brilliant job establishing unique voices for each character, and one of the nice things about this behemoth of a tale is that each hero gets a moment or two to shine. So it’s not all bad… just really, really slow.

A Blizzard’s Worth of Artists

One of the more impressive aspects of this crossover has been the number of artists that have contributed to the project. Usually, with a story as massive as “Endless Winter”, aesthetics will change from issue to issue. However, despite having six-plus artists credited for five books so far, the art doesn’t feel vary jarring with each transition. Part of what helps this is that DC was smart and hired a single art team to work on the flashback sequences: Marco Santucci and Arif Prianto. These two artists create a visual sense of continuity between each issue. so much so that the minor difference in styles for the present stories goes almost unnoticed.

As for Justice League #58, Xermanico takes on pencil duties, and delivers traditionally wonderful pencils in his hyper-detailed style. Once again Xermanico’s paneling is beautiful to behold. While his layouts are fairly standard for portions of the issue, on occasion he throws a visual curveball, and does something visually fun with his panels. Whether it’s using the gutter of the pages as background or designing the page panels to look like a cracked block of ice, his work is playful and creative.

“Endless Winter” is a large investment. DC is asking its readers to buy 9 issues at a $3.99 price point. To me, that’s a big ask. Frankly, there’s nothing overly offensive about Justice League #58 or “Endless Winter” in general, as it’s a fun and interesting story. Nevertheless, it does suffer from some pacing issues. Hey – it’s at least pretty, though!