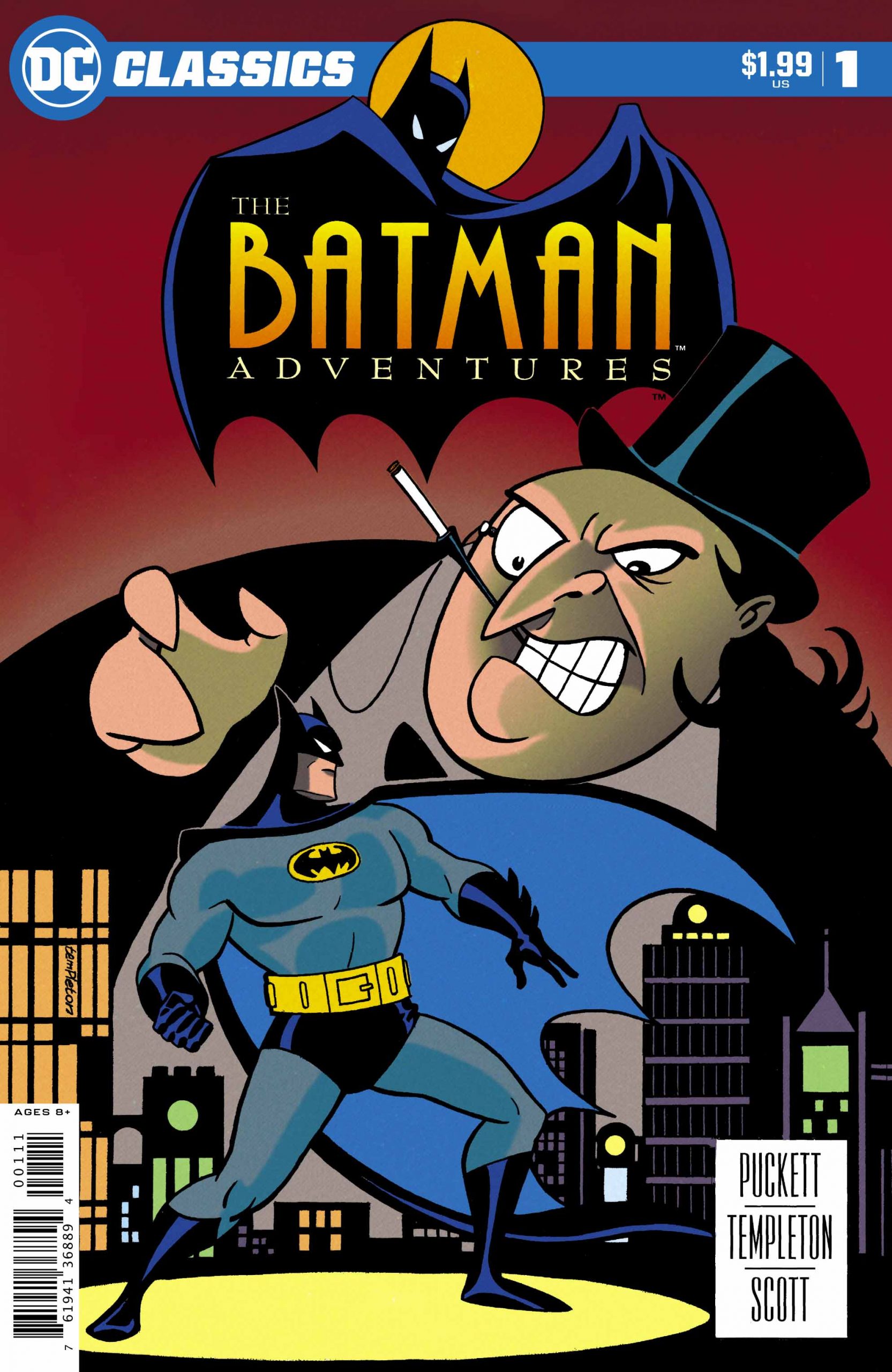 It may not surprise you to know that everyone who works at Dark Knight News is a huge fan of Batman: The Animated Series. Two of us host a weekly podcast, I Am The Night, which breaks down every episode, and every single one of us lost our minds when DC announced the new Batman: The Adventures Continue comics series. Of course, all of this means that I just had to review DC Classics – The Batman Adventures #1, the comic which links both these wonderful pieces of art.

This lovely reprint of the very first issue of The Batman Adventures – cover dated October 1992 – is one of those comics that also works as a time machine. Reading it instantly transported me back to my early 20s, when an amazing new animated series was blowing the world’s collected socks off, and the Dark Knight was ruling the comics world with hammers of pure justice. It’s scary to think that, when I first read this comic, I was actually a couple of years younger than my son, and I Am The Night co-host, is now.

The plot is simple, but looking back, also fiendishly clever. This issue forms chapter one of a three issue, or three act storyline. That’s clever, because each issue is also formed of three acts, just like an episode of Batman: The Animated Series. This is also fairly unique, as the entire first volume of this title, from issues #4 onwards, is made up entirely of standalone, single issue stories. This is the case right up until issues #34-#36, which concluded the run. 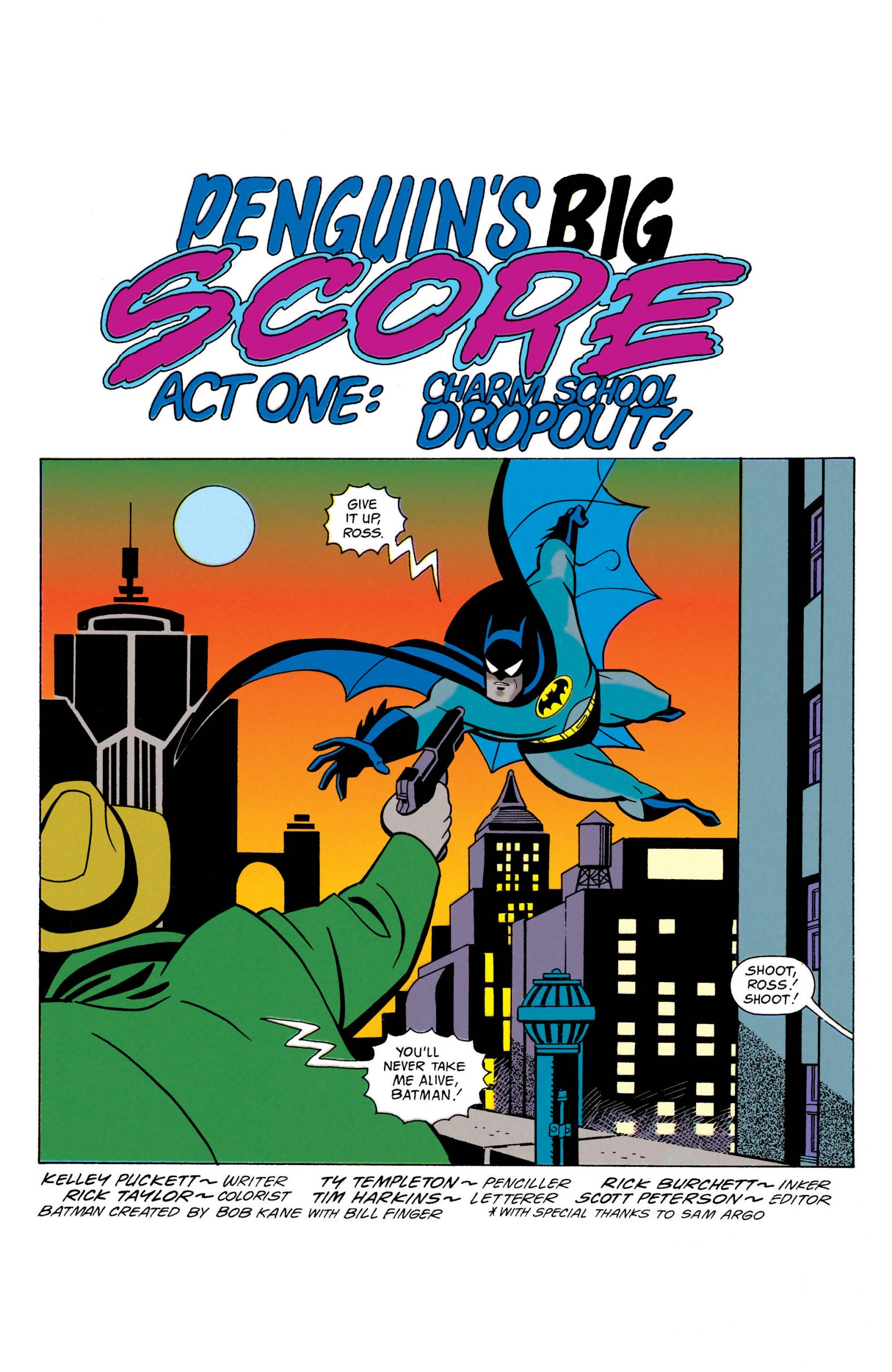 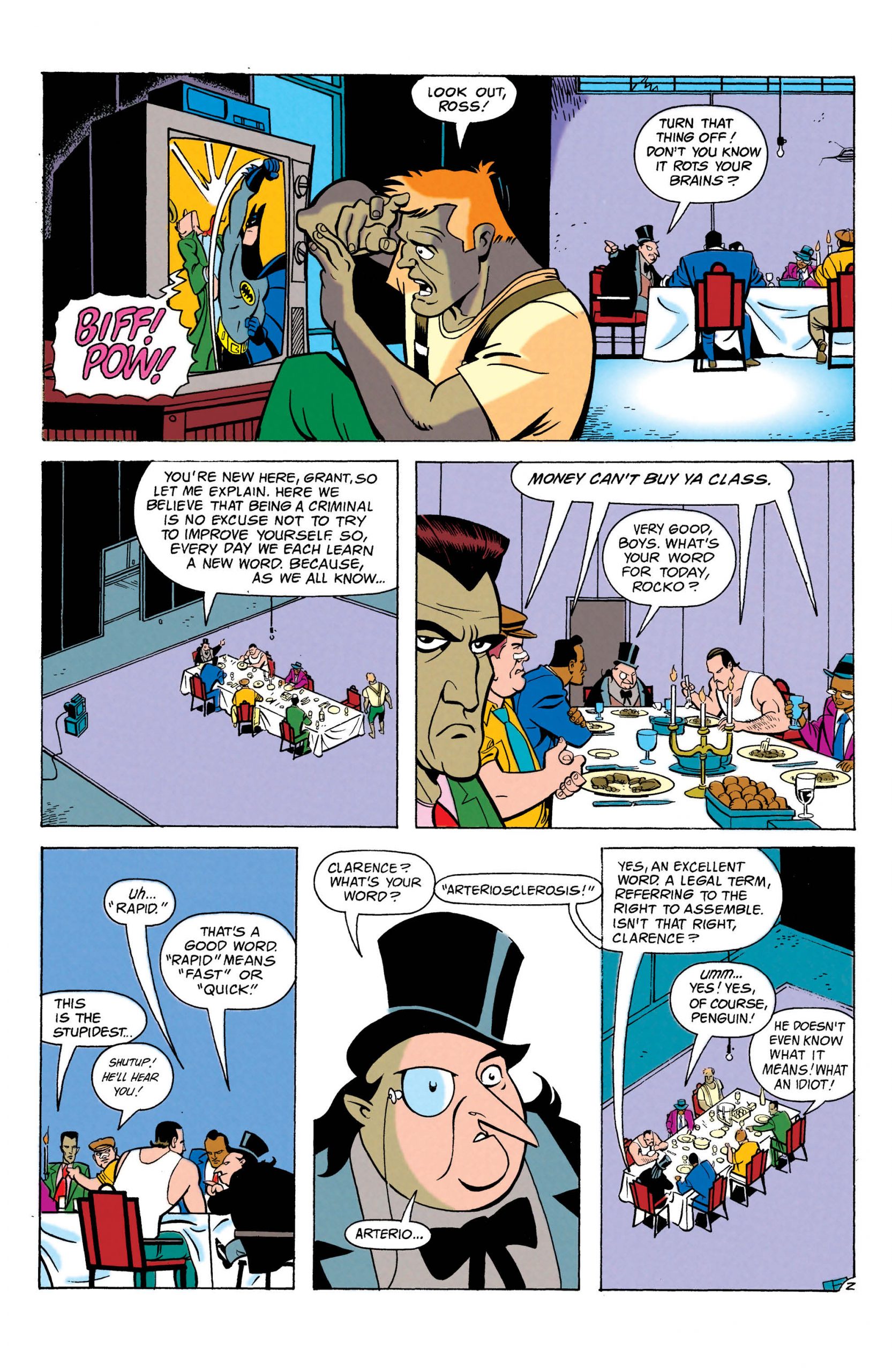 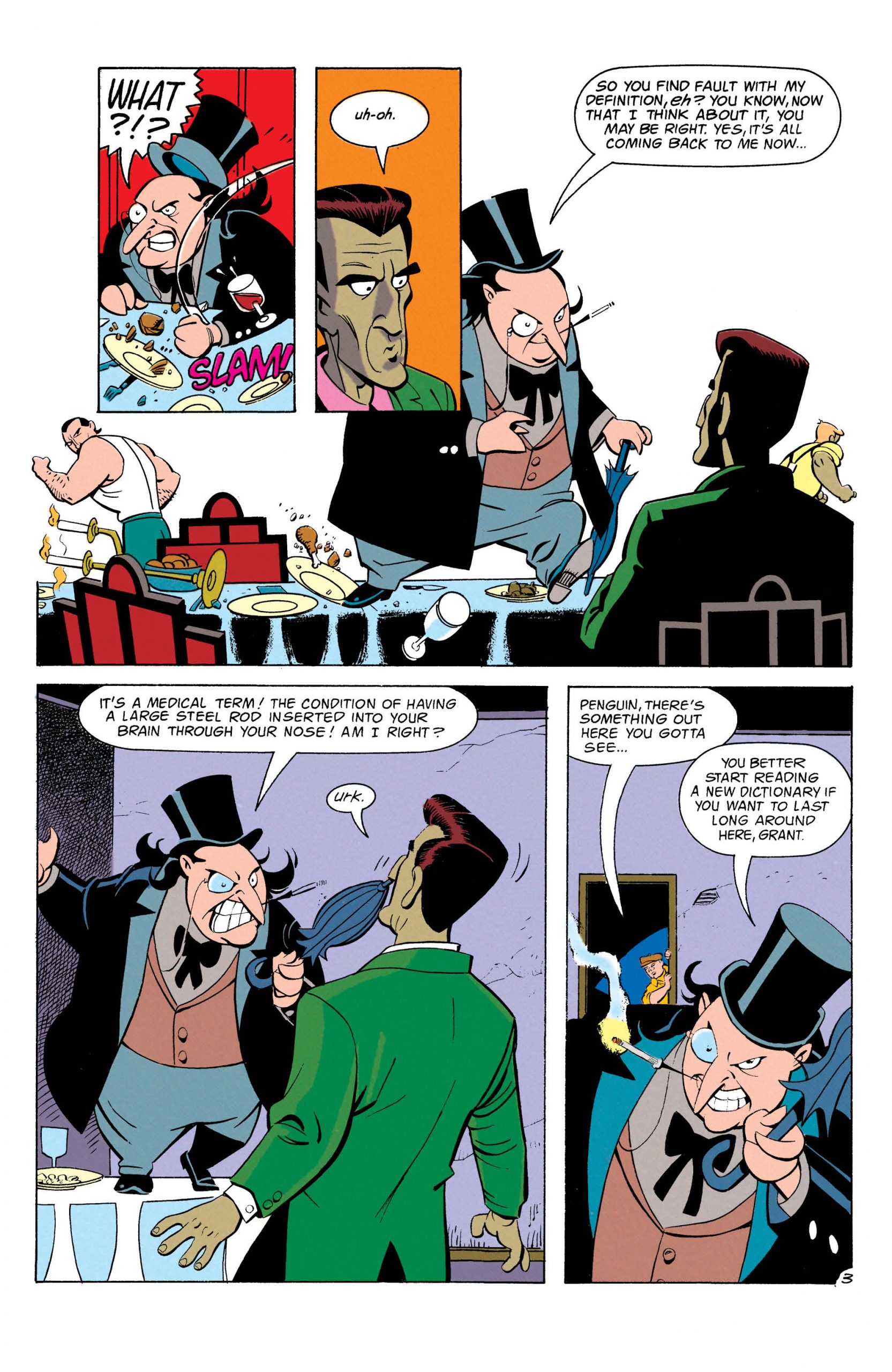 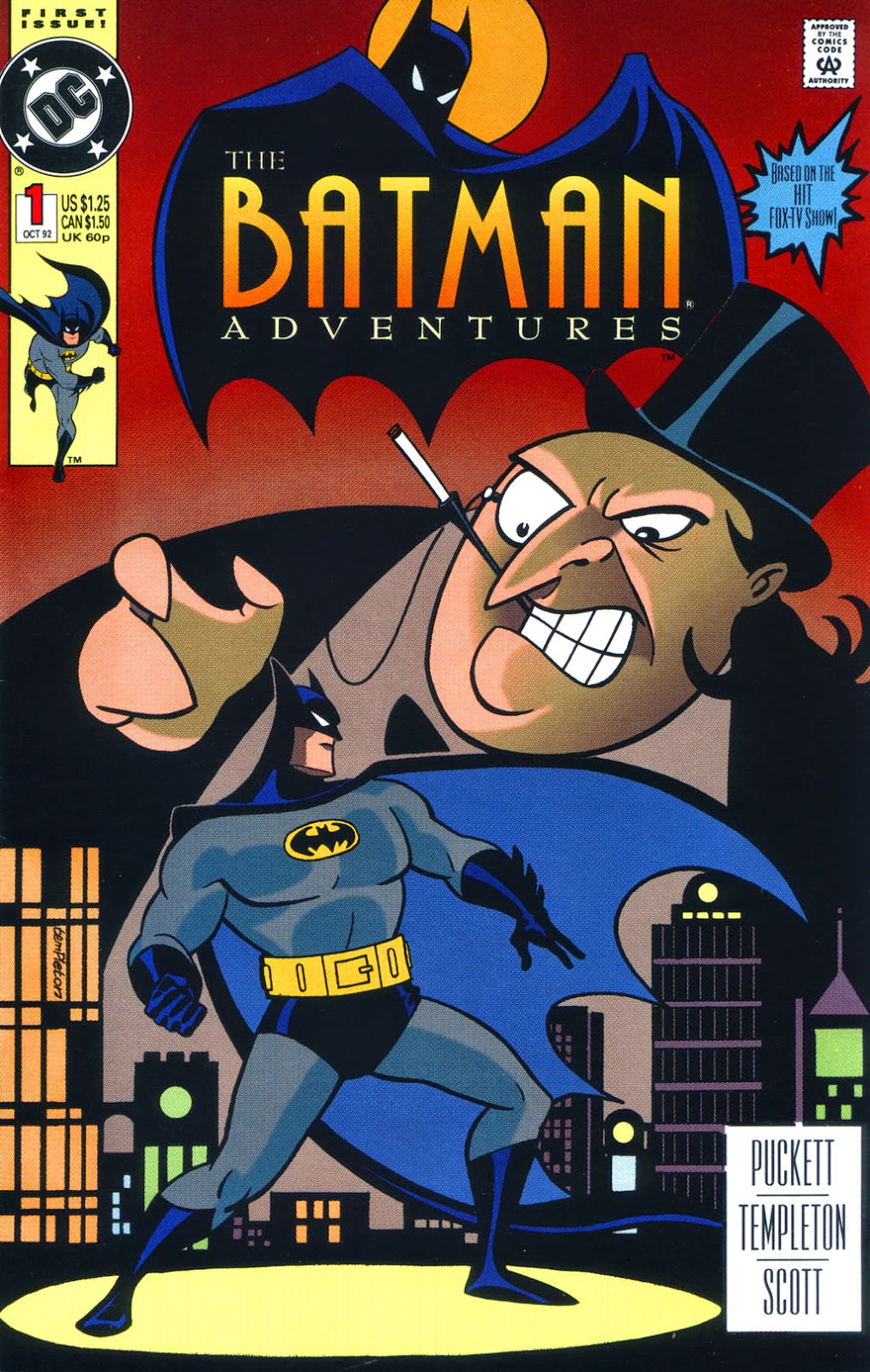 A Lesson In Simple Elegance

This issue, and the series that followed, still provide a lesson in comics storytelling excellence. Every line of dialogue is measured, as is every simple brushstroke of the art. Drawing pages this simple is damned hard! From the goon’s face, actively rooting for the villain while he’s watching the Batman TV show (eat your heart out, Deadpool), to penguin’s rage at being contradicted, every expression is magic. The action flows, the colors pop, and everyone can feel like a kid again.

I’m not saying that these comics are childish, not at all. Some of the plots, twists and psychology (Penguin again) are downright dark, but only adults will really notice that. What I’m saying is that they evoke the childlike sense of wonder that the 50s Batman comics, and the 60s TV show did. The works that many seasoned fans still say were their gateways into comics in general, and Batman’s adventures specifically. Younger adult fans name the Animated Series, and The Batman Adventures.

Penciller Ty Templeton went on to write dozens of issues, and inker Rick Burchett has drawn and inked more than just about anyone else. This lovely issue shows us why. I mean, look at this stuff… it’s gorgeous! Color artist Rick Taylor, with his subtle, almost pastel hued backgrounds, only adds to the atmosphere and the action. I wouldn’t change a thing. 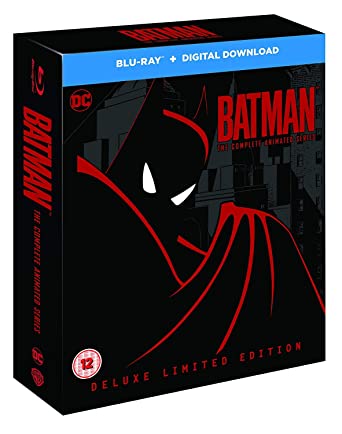 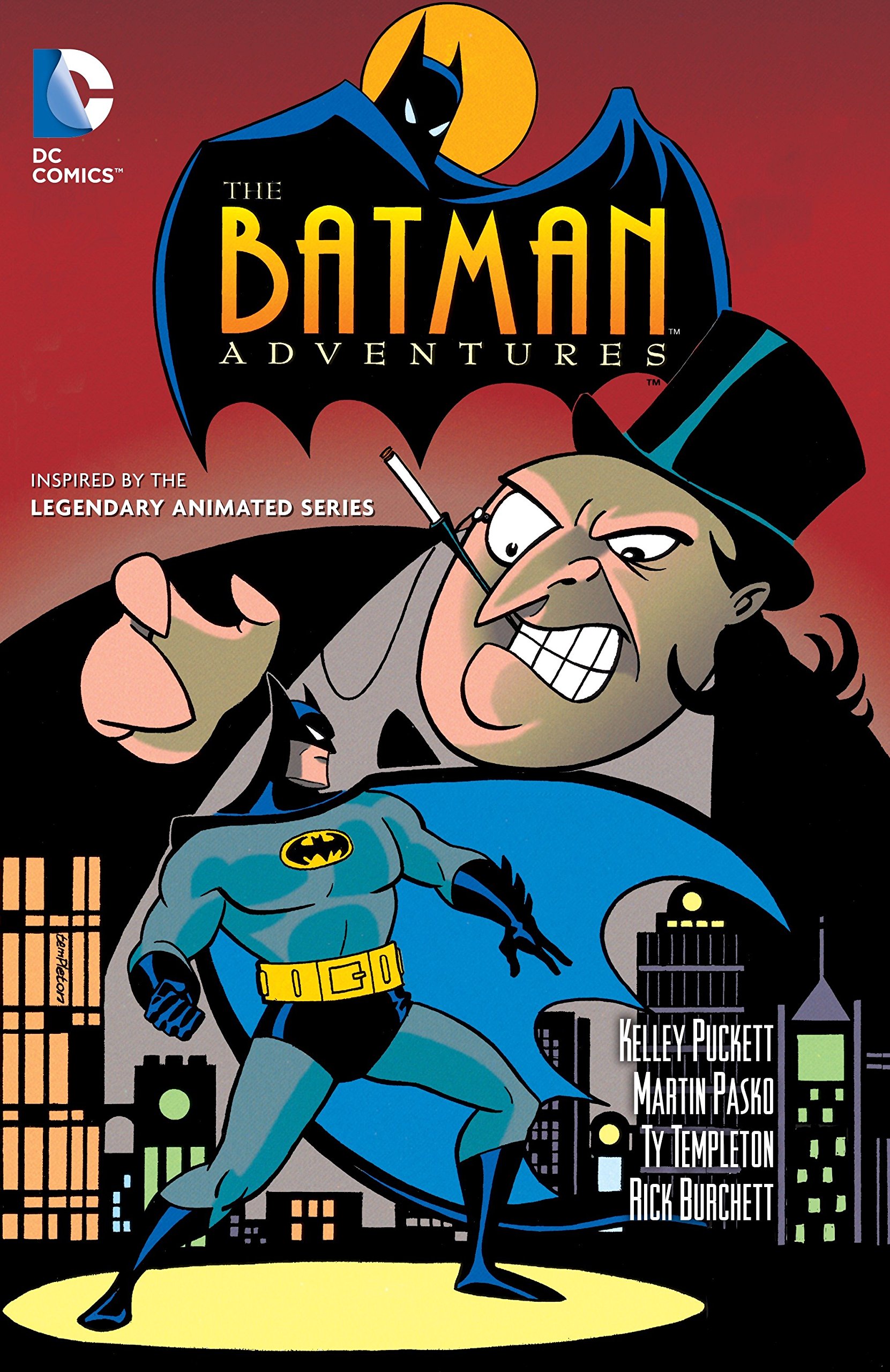 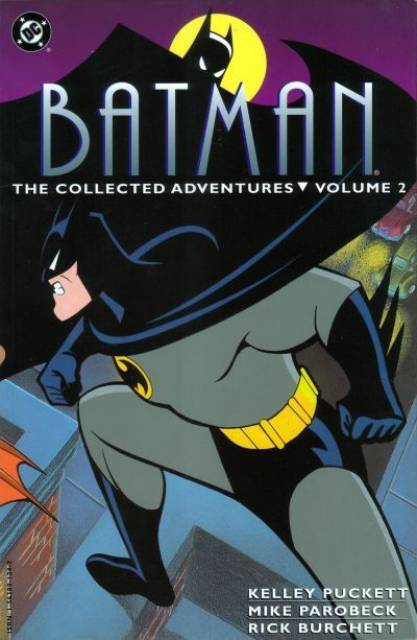 Letterer Tim Harkins, with his big, easy to read word balloons, and his spectacular sound effects, adds so much to the comic. I really miss his style and his flair. It’s no wonder that this incredible artist has worked on hundreds of issues, for both DC and Marvel Comics. I’d love to see him working on Batman again. Please DC, make the new series run on longer than six issues… Pleeeeeaaaase!

Artists from the actual show, like Glen Murakami and Brad Rader, also went on to contribute to this stellar comic book series, but DC Classics – The Batman Adventures #1, gives new readers a glimpse of how this magnificent journey (which is now growing even more thanks to The Adventures Continue), actually started. This is the ground floor, and if this lovely comic gets people to pick up the trade paperbacks, and watch the TV series that inspired them… then everybody wins.

If you want a comic that you can hand to your children with a clear conscience, but is also one that you can read and enjoy – either with them or on your own – The Batman Adventures is without peer. Buy this, read it, love it. If you do – and I don’t see how you wouldn’t – then pick up the collected editions, and complete the journey.