Kevin Smith Has Contributed A Story To ‘Detective Comics’ #1000 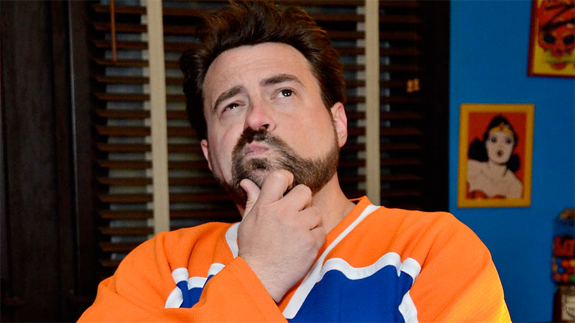 On the podcast Hollywood Babble-On, Smith discussed his how he got the part to write for Detective Comics. Additionally, he claims that being stoned actually helped his writing. Smith says that he received a  “Mystery bag” of marijuana that he consequently smoked and inspired his writing. Smith on his process:

One time I smoked a joint, wrote this f**king issue of Detective Comics that’s coming up on issue 1000. They’ve had a thousand issues. I think it must have done more, but in their numbering their coming up to Detective Comics issue 1000. So, they asked me “Will you write a story for, an eight-pager, Jim Lee will draw it?” I was like f**k yeah, Jim Lee? Holy sh*t, man, I’d let him draw my death. Like, he’s so f**king good. So, I smoked this f**king strain. It’s crazy. I’ll never know what it was. It was like we’re passing like two ships in the f**king night and shit. I don’t know what it was, so I can’t be like “You must get me this.” It made me write honestly the best Batman story I’ll ever write.

Smith on Marijuana and Batman

In addition to a well-regarded Green Arrow run, Smith also wrote Batman: Cacophony and Batman: The Widening Gyre in 2008 and 2008 respectively. The Widening Gyre is infamous for a scene where Batman admitting to wetting his pants. Interestingly, Smith addressed the scene in the podcast too, saying his new story will make up for it.

This, I think, the thing I wrote makes up for that. It just feels like a good, solid, like f**king Batman story and that came from smoking this weed of which I’ll never know what it was, man.

Fans can judge how marijuana-induced writing is when Detective Comics #1000 comes out in March 27.

Dark Knight News does not condemn or condone the use of marijuana for creative writing purposes.