“Oh, you think darkness is your ally…?” Gotham writer and producer Tze Chun has posted a first look of actor Shane West in his Bane persona.

Chun did not really remark on West’s look other than it is apparently “Lit”.

“I am Gotham’s reckoning…”

West’s Bane is interesting for a couple of reasons. First off, no matter what you think of this picture, remember that it is not the finished product. It is almost certain that West’s Bane will look different on-screen once the effects, proper lighting, and film shots are added.

Secondly, West plays the father of the Bane that readers know. Despite having a different identity in the comics, Gotham show runners seem to make Bane a generational name.

Finally, doesn’t West look an awful like Mad Max: Fury Road‘s Immortan Joe? He resembles the Mad Max villain more than Bane with the plastic chest and tubes. He even has that gross sickly pink color under his eyes. 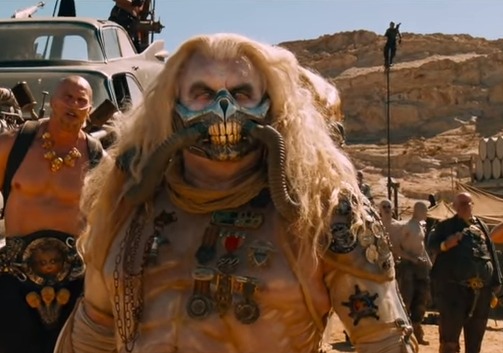 Despite all this, it is apparent that West is super pumped for the role. He tweeted a picture teasing part of the suit while making sure his meal box is addressed with the proper name.

Got a little message yesterday with my brekkie….? @Gotham pic.twitter.com/ortqfddrH2

Whoever is on craft service on Gotham’s set is definitely a fan. Perhaps he is hoping to so see West quote Tom Hardy towards his breakfast: “I am the League of Shadows! I am here to fulfill my hunger’s destiny! You’re precious eggs and bacon! Gratefully accepted. We will need it.”

Shea Whigham On His ‘Joker’ Role