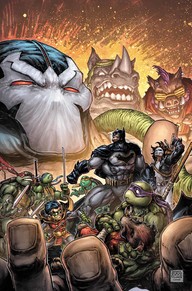 Bane’s venom is filling up the veins of New York City in this month’s issue of Batman/ Teenage Mutant Ninja Turtles II. The villain is huge (and I mean HUGE) and is spreading his ultimate weapon all across the city, mainly in his henchmen, the recently acquired Foot Clan, as well as Bebop and Rocksteady. Meanwhile, the heroes are playing catch up, tracking down the nefarious foes before they destroy the city.

Issue #3 plays more like a setup issue than anything else. Not too much happens as far as the main narrative is concerned. Baxter Stockman is helping Bane pump his venom into his followers, Batman (with Splinter and Leonardo) track down the lair, and Raphael takes on Damian. Each of these factors are planting seeds for future issues (more on that later).

However, Donatello is the backstory of this 6-issue run. Once again, he confronts his demons, and questions his worth to the team. Had he not screwed up, they wouldn’t be in this situation in the first place…right? Sure, that makes sense, but he’s the only one who can solve the puzzle to stop Bane’s plan and send him back to Gotham too. But that’s not good enough for him.

I love what Tynion is doing with Donny. I feel for the guy…or turtle, rather. As a fan, I’ve always seen him as a valuable member of the TMNT crew. He may be the most vital, with all of his brainpower. But, his doubts on his physical abilities are relatable, and empathetic.

The other subplots are entertaining, with my favorite (and least favorite) being the tension between Raph and Damian. I love it because these are two stubborn jerks who want to rip each other apart. It makes total sense that they don’t get along, so why not have them fight? I also don’t like this because Damian is involved. Let me be blunt:

He’s mouthy, selfish, arrogant, and after being around for over a decade, I still don’t see his value. He’s been a cockroach that won’t go away, and is a major turnoff for me in Batman books. In this issue though, their fight ends in a standstill, but I can’t help but think they will help each other out in the coming months. 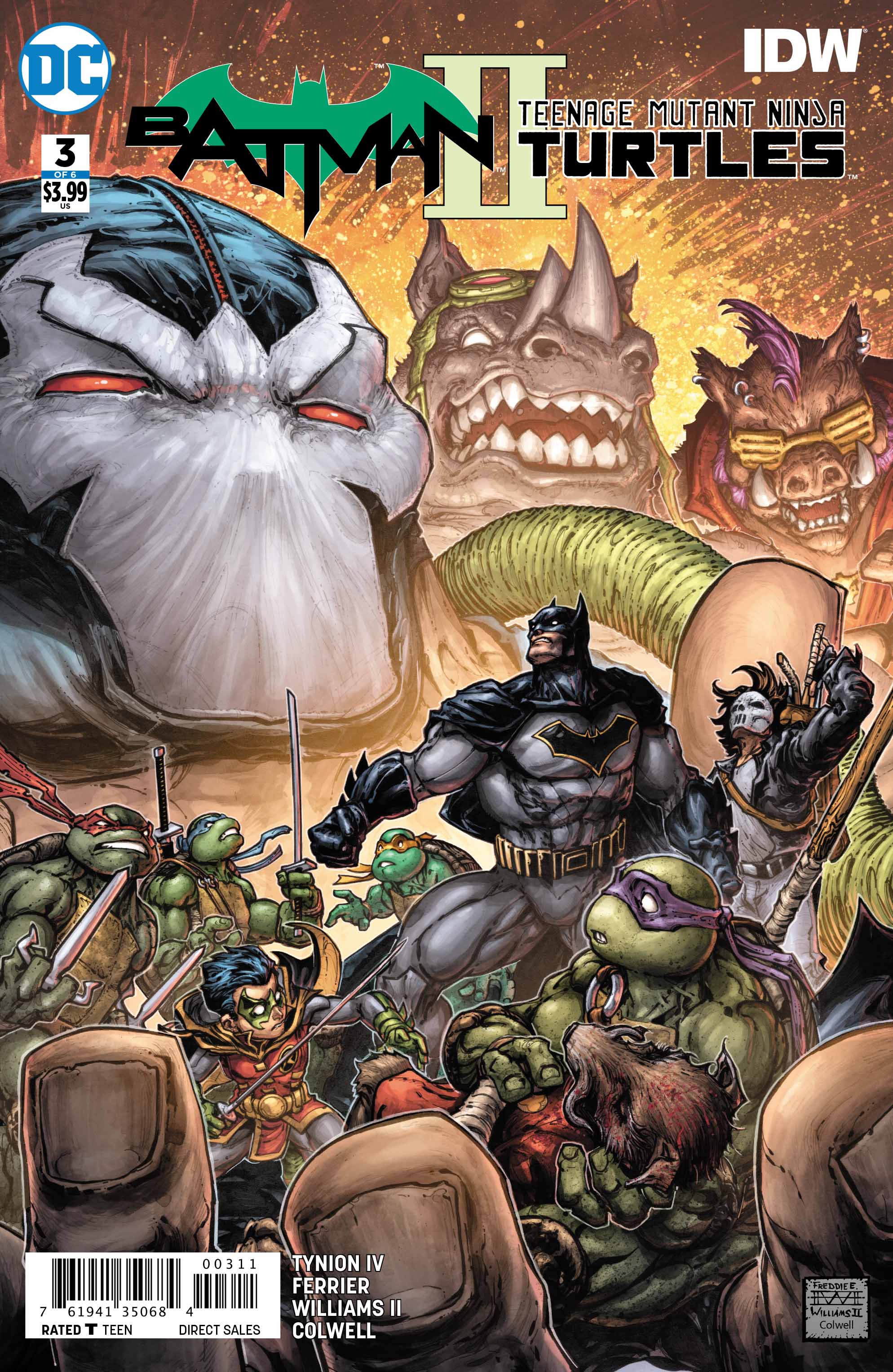 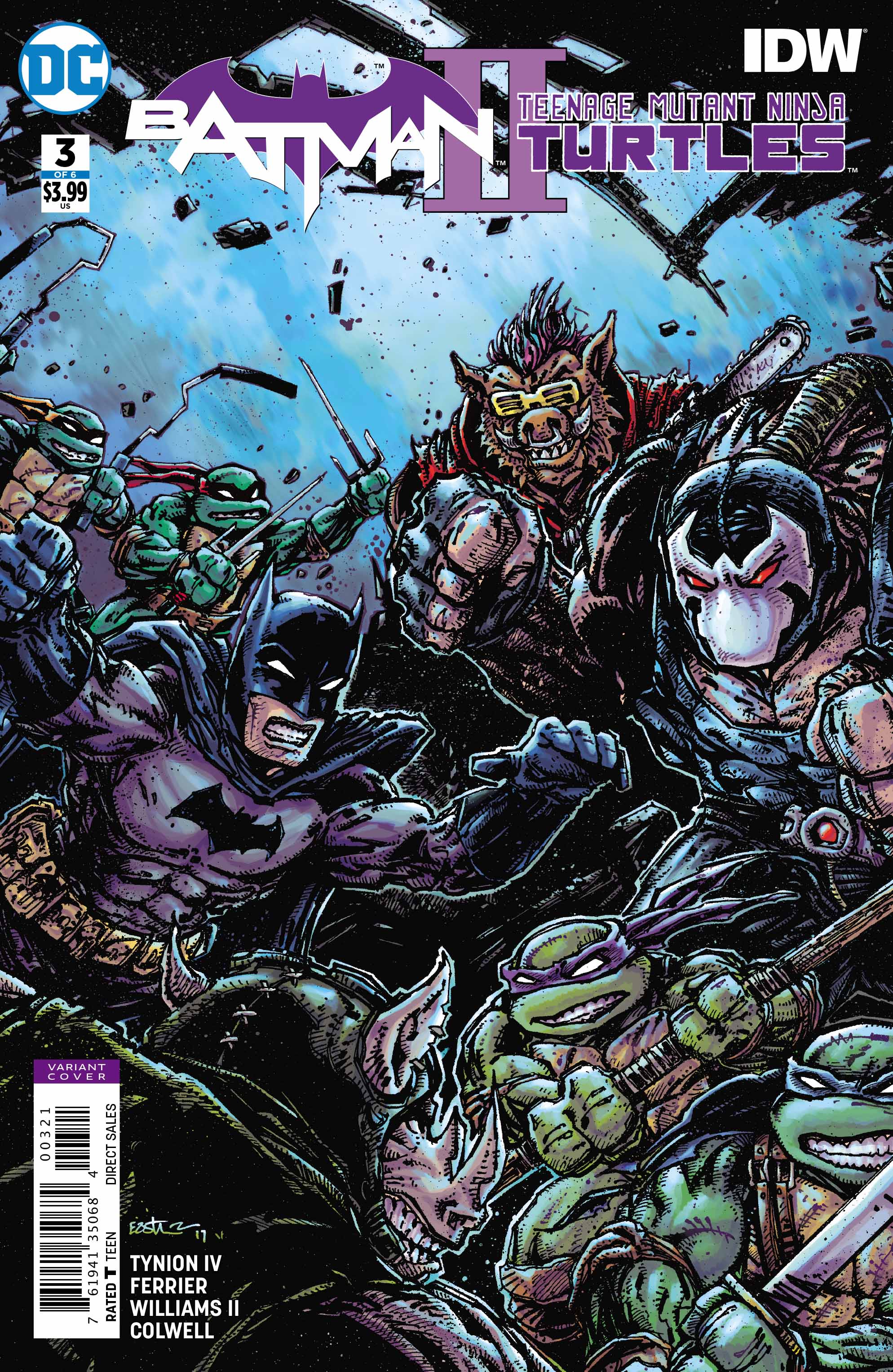 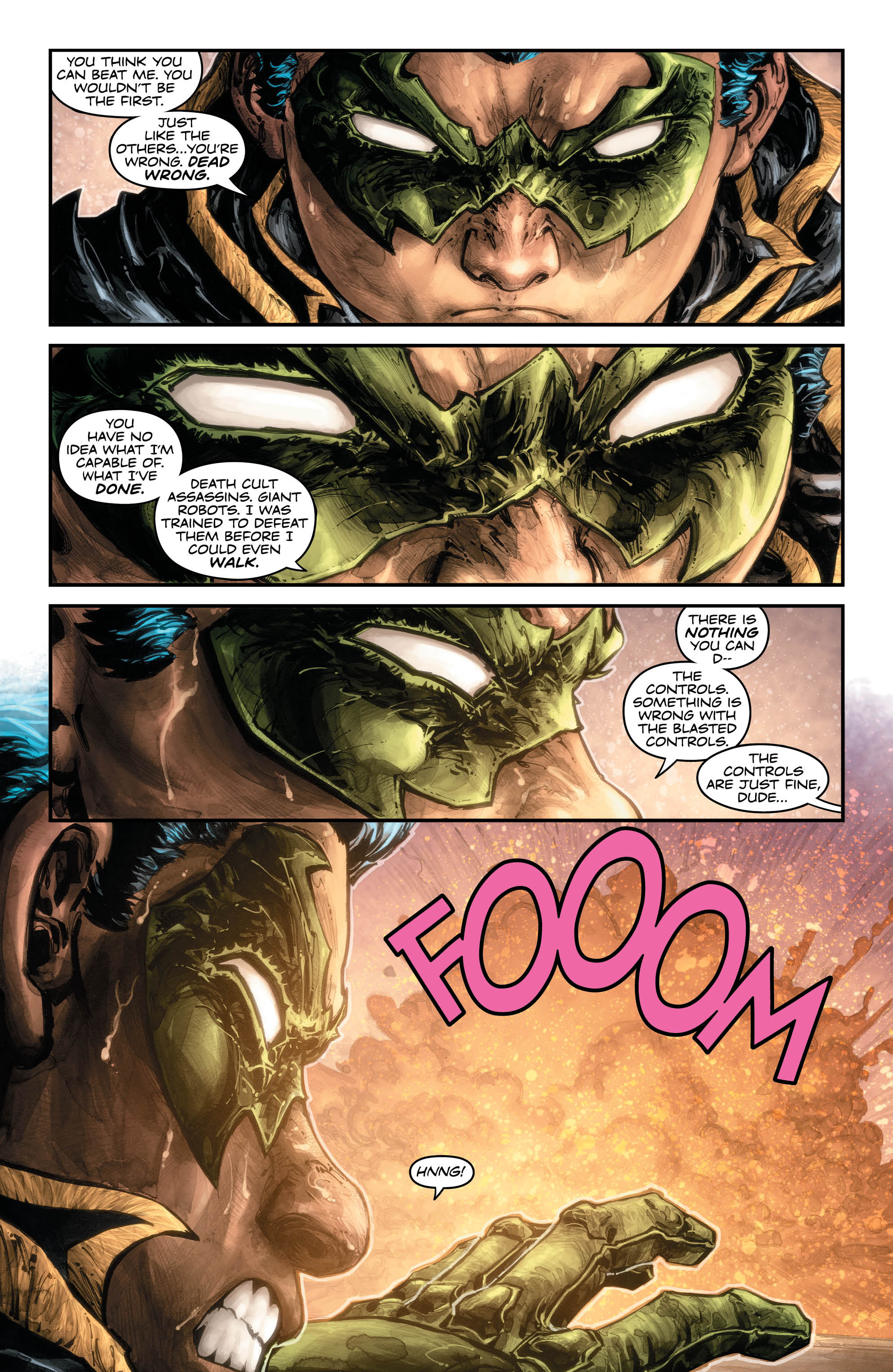 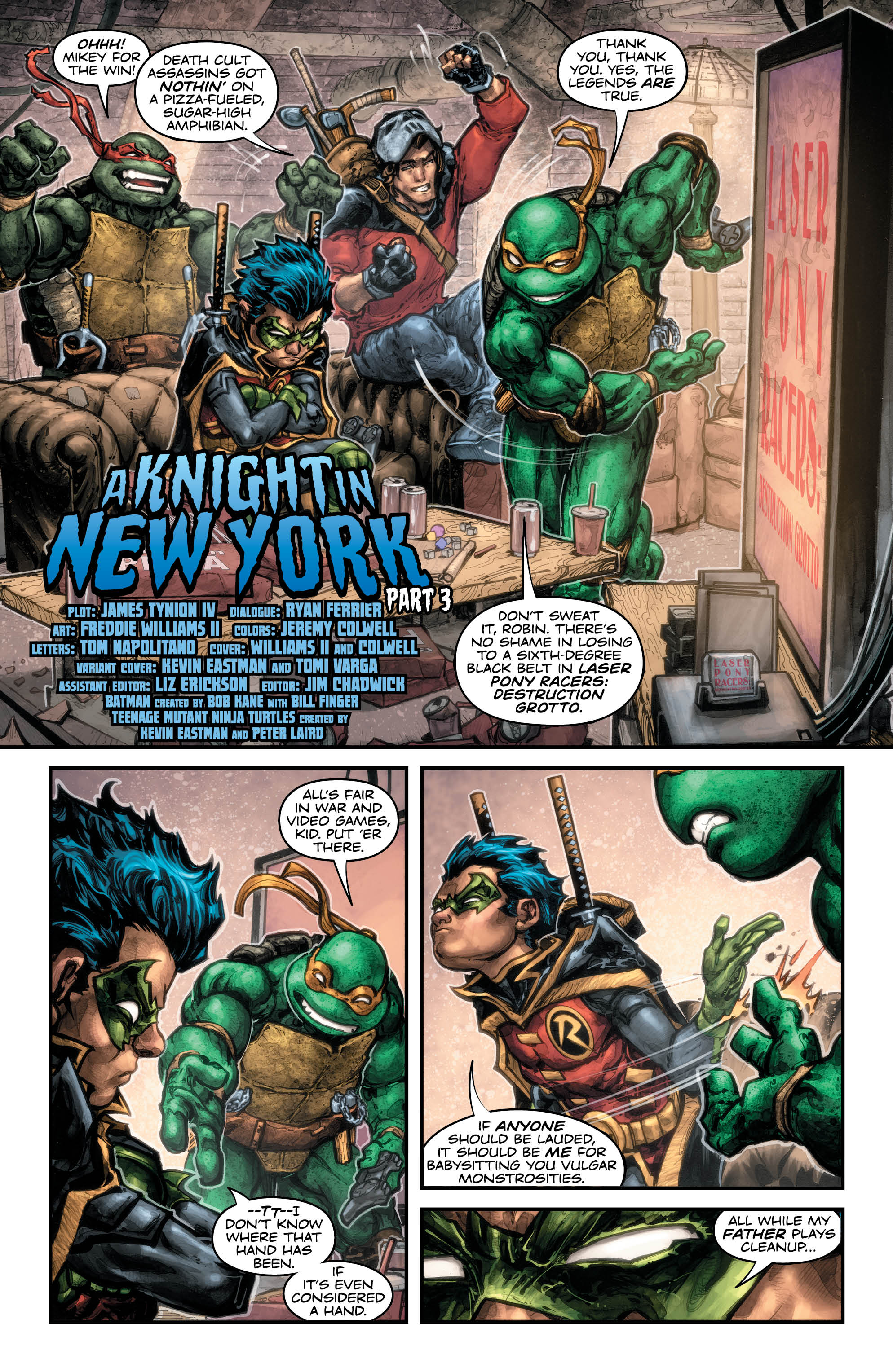 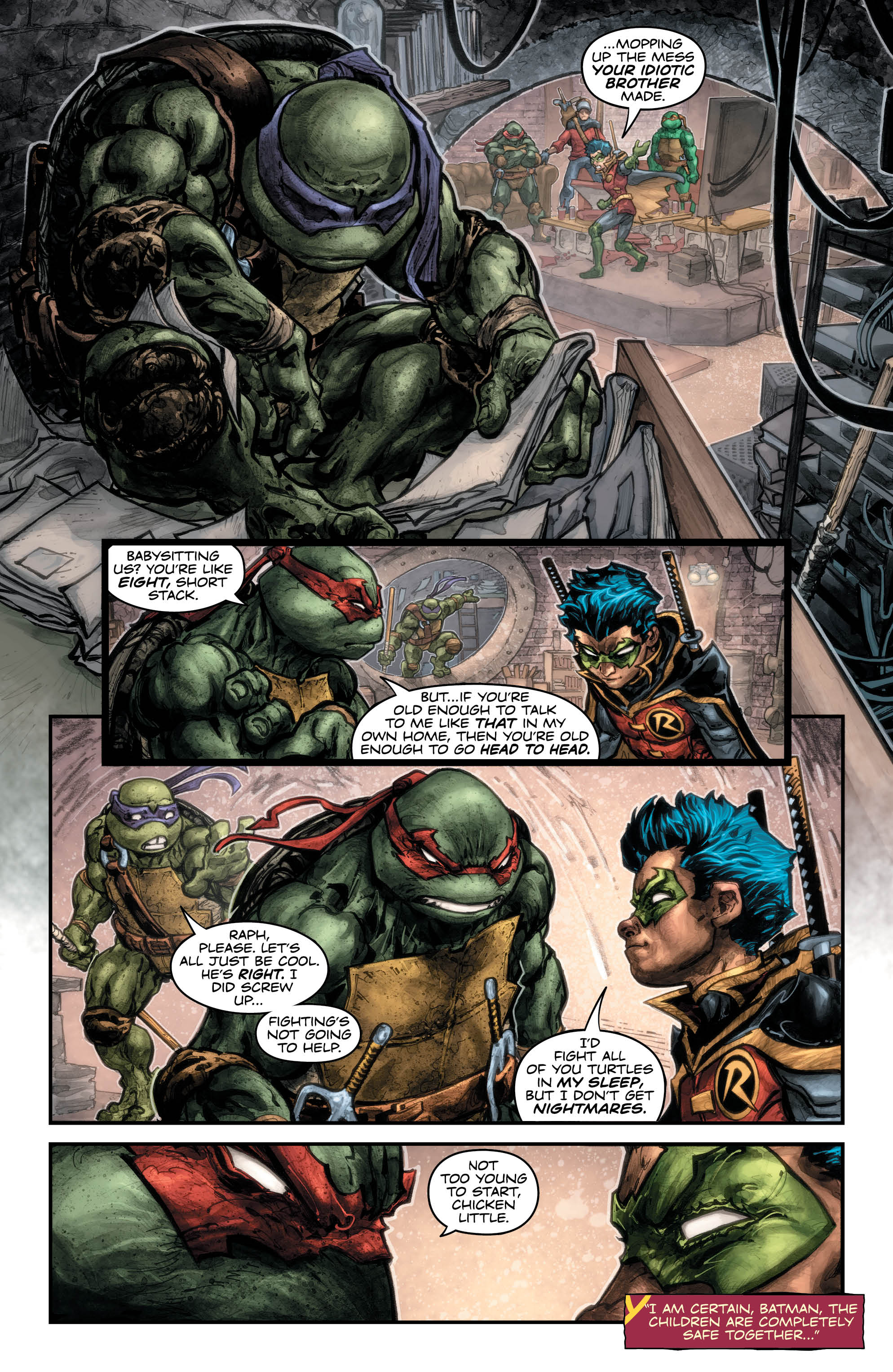 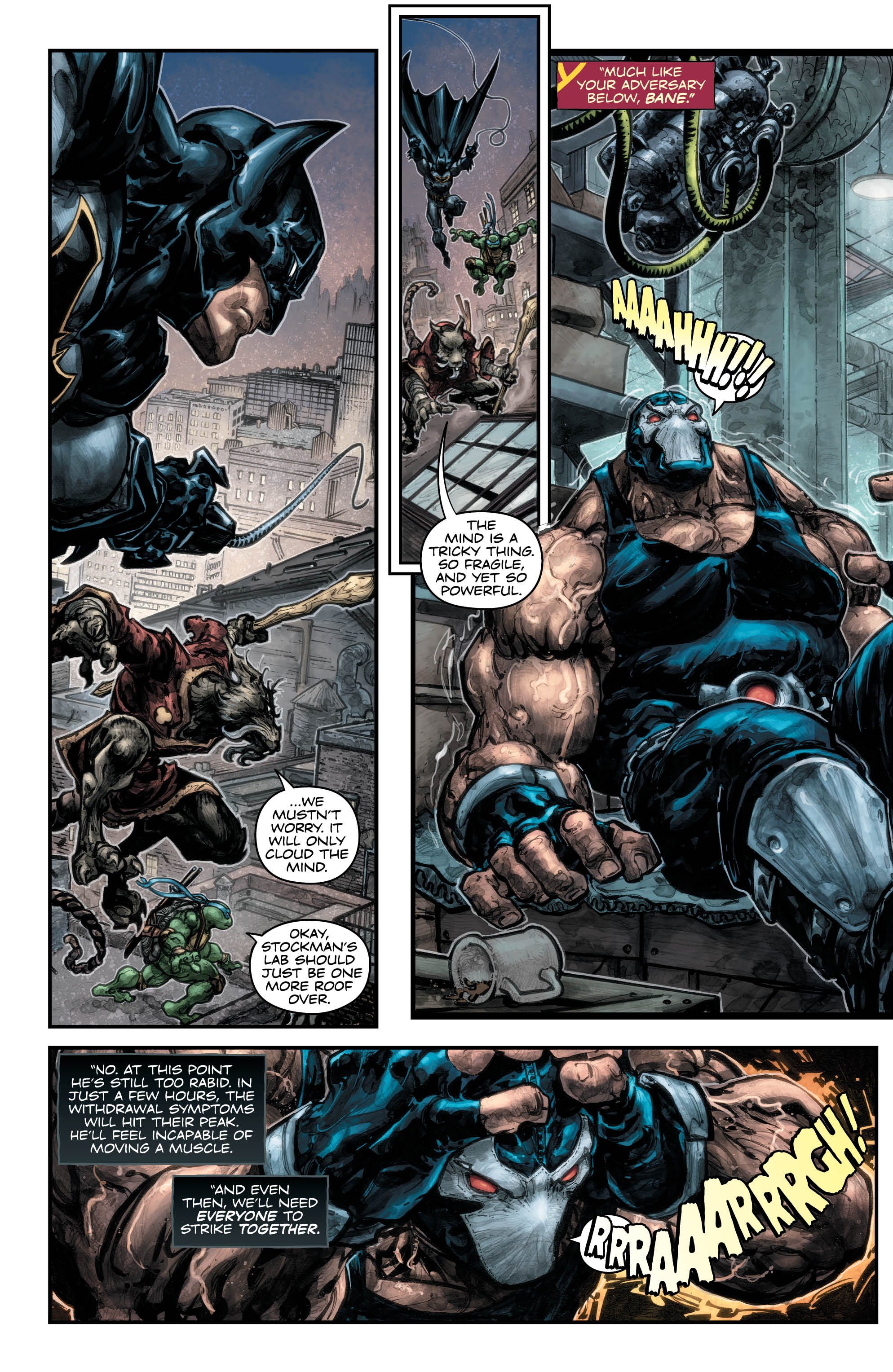 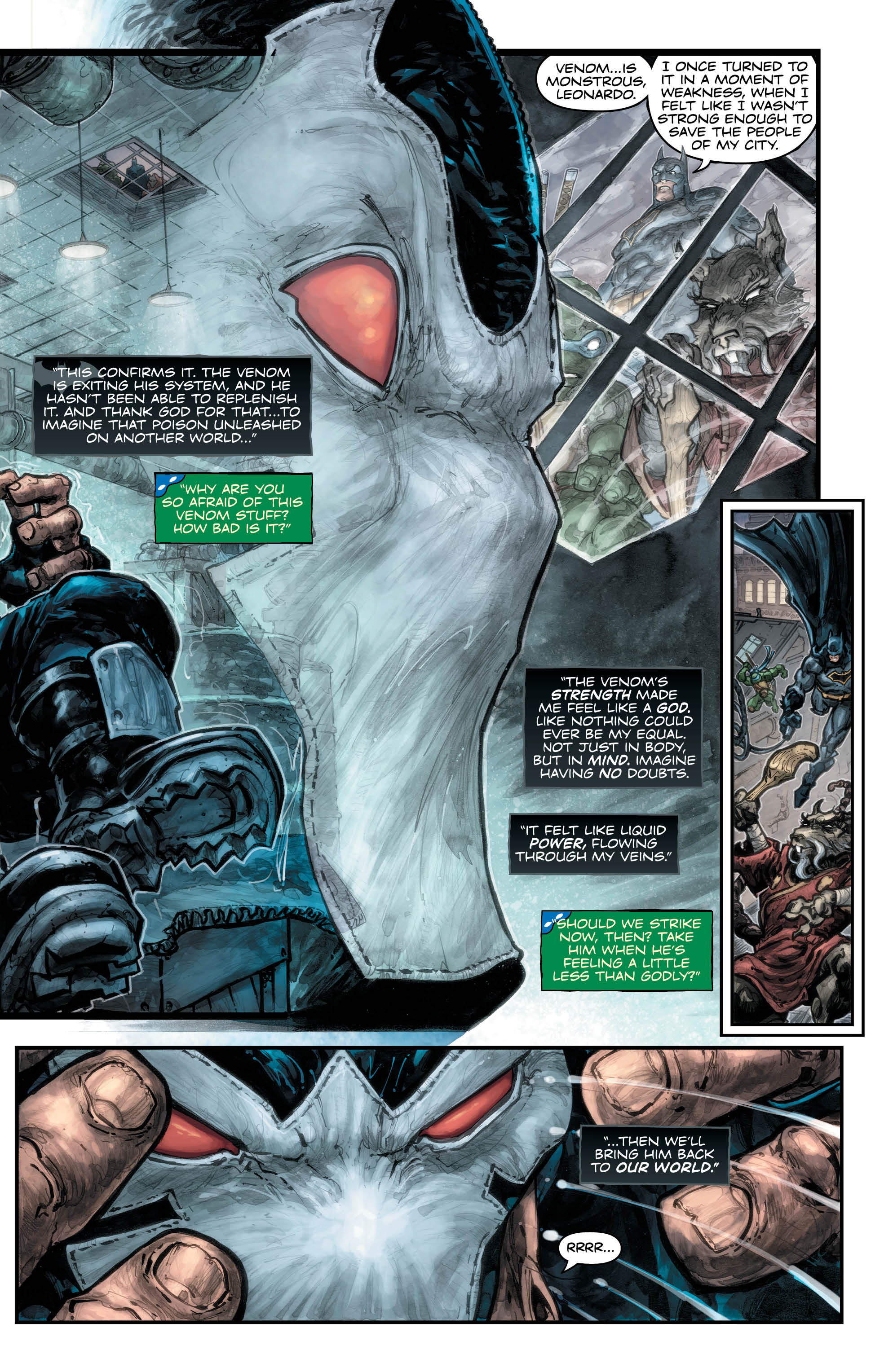 This issue is also a good-looking book. Thanks to the visionary team of artist Freddie Williams II and colorist Jeremy Colwell, we have 21 pages of comic book glory. Williams draws each character with a unique style, exaggerating their features just a bit, accommodating the colorful yet grimy comic book world this series requires. Bane looks a little too big for my taste, but it works in this story. Colwell’s coloring is a beautiful mix of bright and dark, setting each scene in a distinguishable light, but yet again keeping it a little dirty and grungy (since it takes place in the sewers). I’ve had no complaints about the look of this series, and don’t see any on the horizon.

As for a minor complaint with this issue: Batman. It hurts me to say it, but I didn’t find him that necessary here. We spend a lot of time with Damian, Raphael, Donatello and Bane. Batman only gets a few bits of dialogue, and it’s mainly to state the obvious. Best example: telling us what Baxter Stockman is turning into. Batman seemed a bit too expository for my taste in this issue.

Batman/Teenage Mutant Ninja Turtles II #3 (longest comic book title around!) is another fun outing from the team of James Tynion IV and Freddie Williams II. Funny, exciting, and refreshing, this is what a comic book should be.

Is Affleck’s ‘Batman’ In or Out of ‘Flashpoint’?