“The Batman Who Laughs” 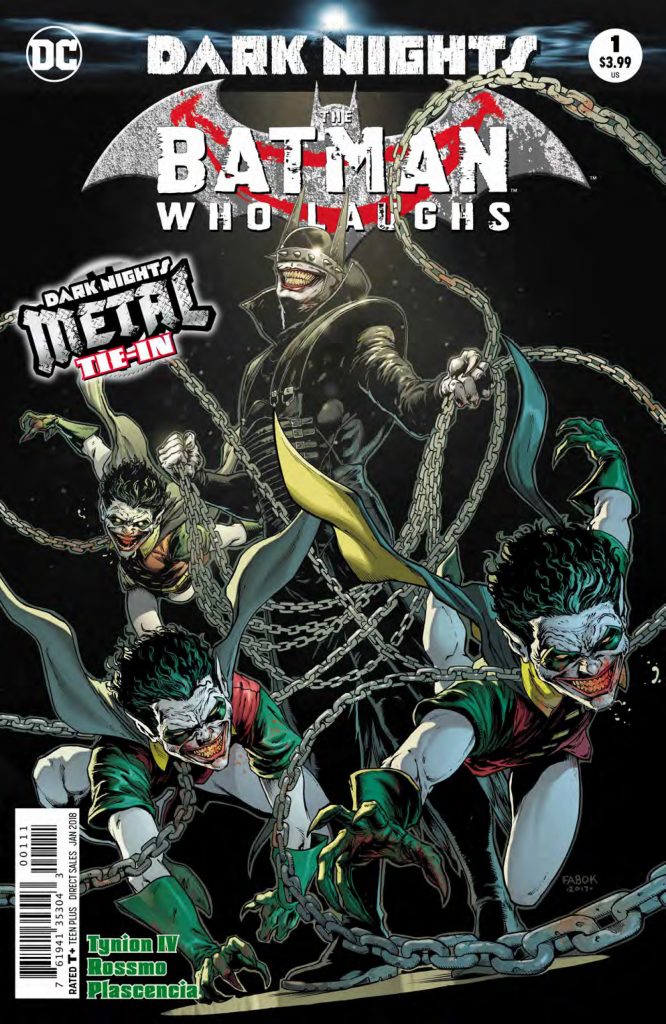 Out of all the Nightmare Batmen that have been introduced formally, none was more intriguing than the Batman Who Laughs. The idea of a Batman/Joker amalgamation has been talked about amongst fans for ages. What if Batman was more like his greatest rogue? DC Metal has given us an answer and the results are nightmarish—in all the good ways.

The Batman Who Laughs #1 opens on with the titular character explaining a story to an unknown entity using tarot cards branded with familiar heroes—and a villain. The rest of the story takes place in this Batman’s past, on Earth -22. There, the Joker has finally gone too far. Having Batman tied up, blowing up hospitals, and gloating about killing Commissioner Gordon; the Joker is telling the story of his breaking point. He wants to rebuild the city into what he finds to be the best of himself and the best of Batman.

As the Joker begins to murder the parents of Gotham and unleash a Joker toxin on the children, Batman has had enough and breaks free. He has hit his own breaking point, beating the Joker until he finally crosses that one line—and kills the Joker. As the Joker dies, we see a toxin escape from his body, which Batman is holding. In the next few panels, Bruce is still in control, but the toxin is showing signs of itself creeping in.

This proves just how smart the Joker was. He had a fallback plan in cases he was killed—infect the closest person to him. He knew all along what he would have to do to make Batman cross that line, and Joker played Batman of Earth -22. While I’m sure there are instances of more gruesome comic books, The Batman Who Laughs ranks up there. A Batman whose moral code is compromised, to the degree of Joker’s moral code, has no lines.

What’s the worst thing you would think a Batman who laughs is capable of? Think again. How he takes out the bat-family is merciful compared to who he takes out the rest of the Justice League—specifically Superman, Lois, and their son. It’s so evil, it makes you wonder what was going through James Tynion IV’s head. 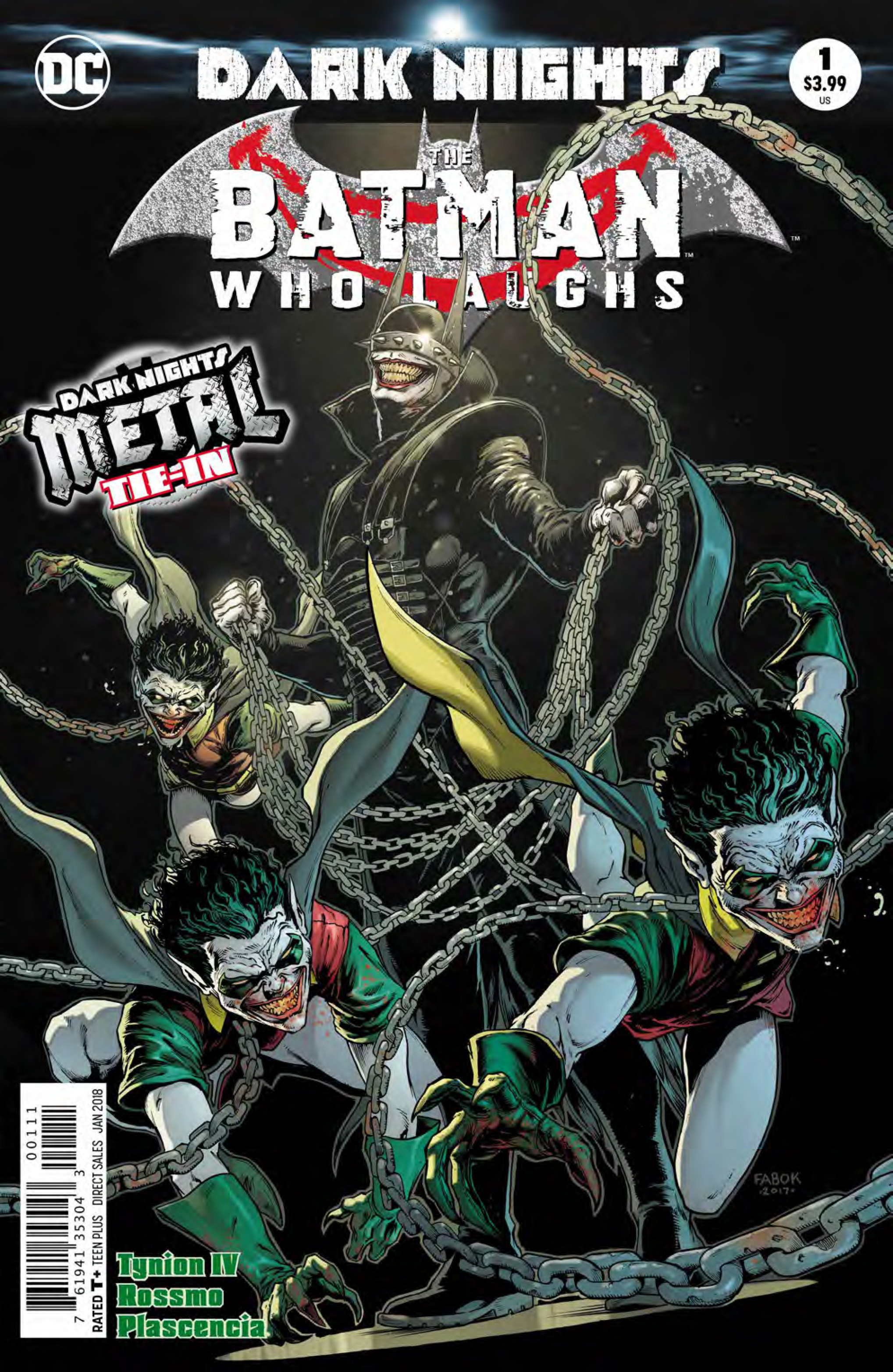 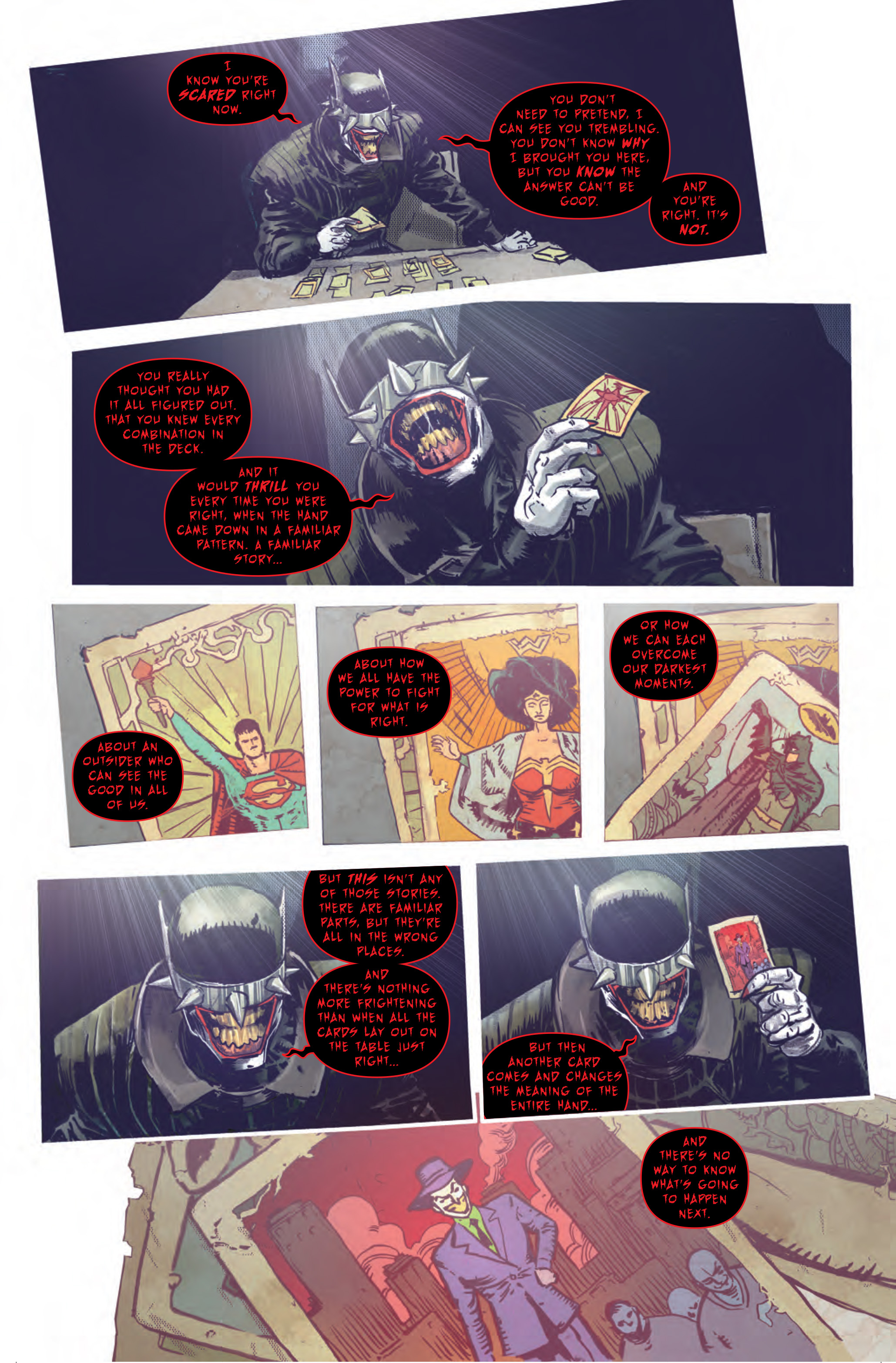 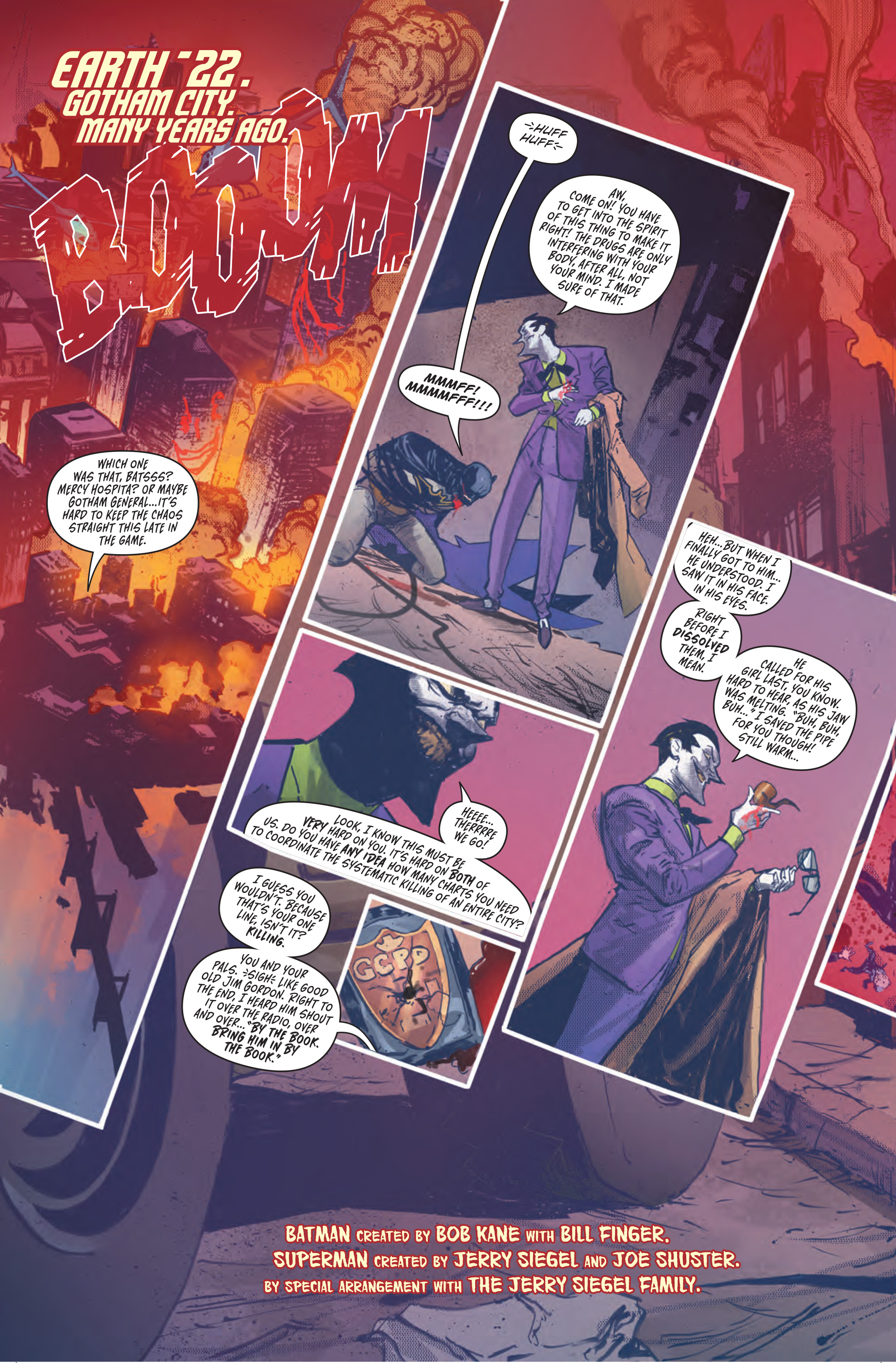 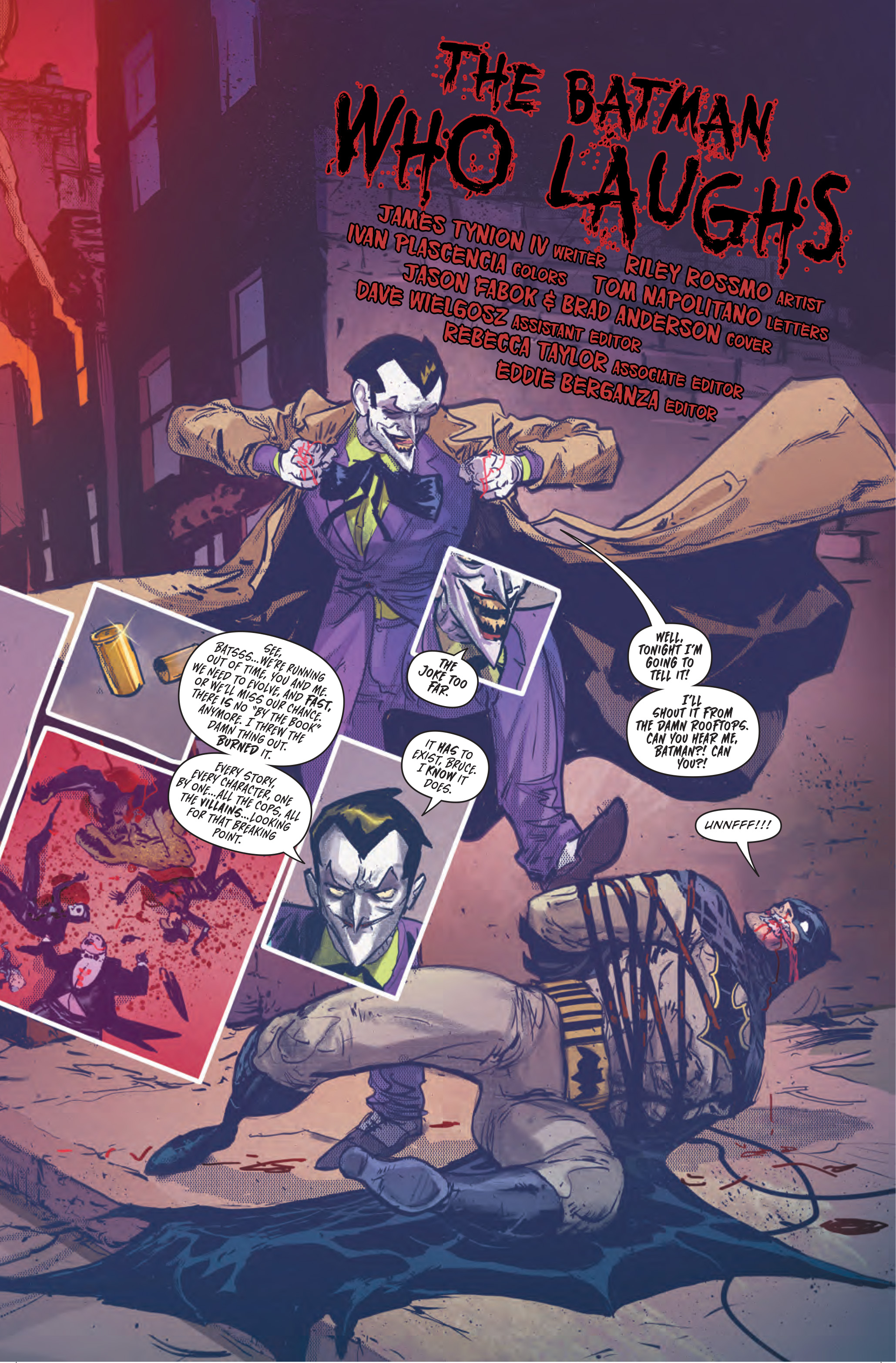 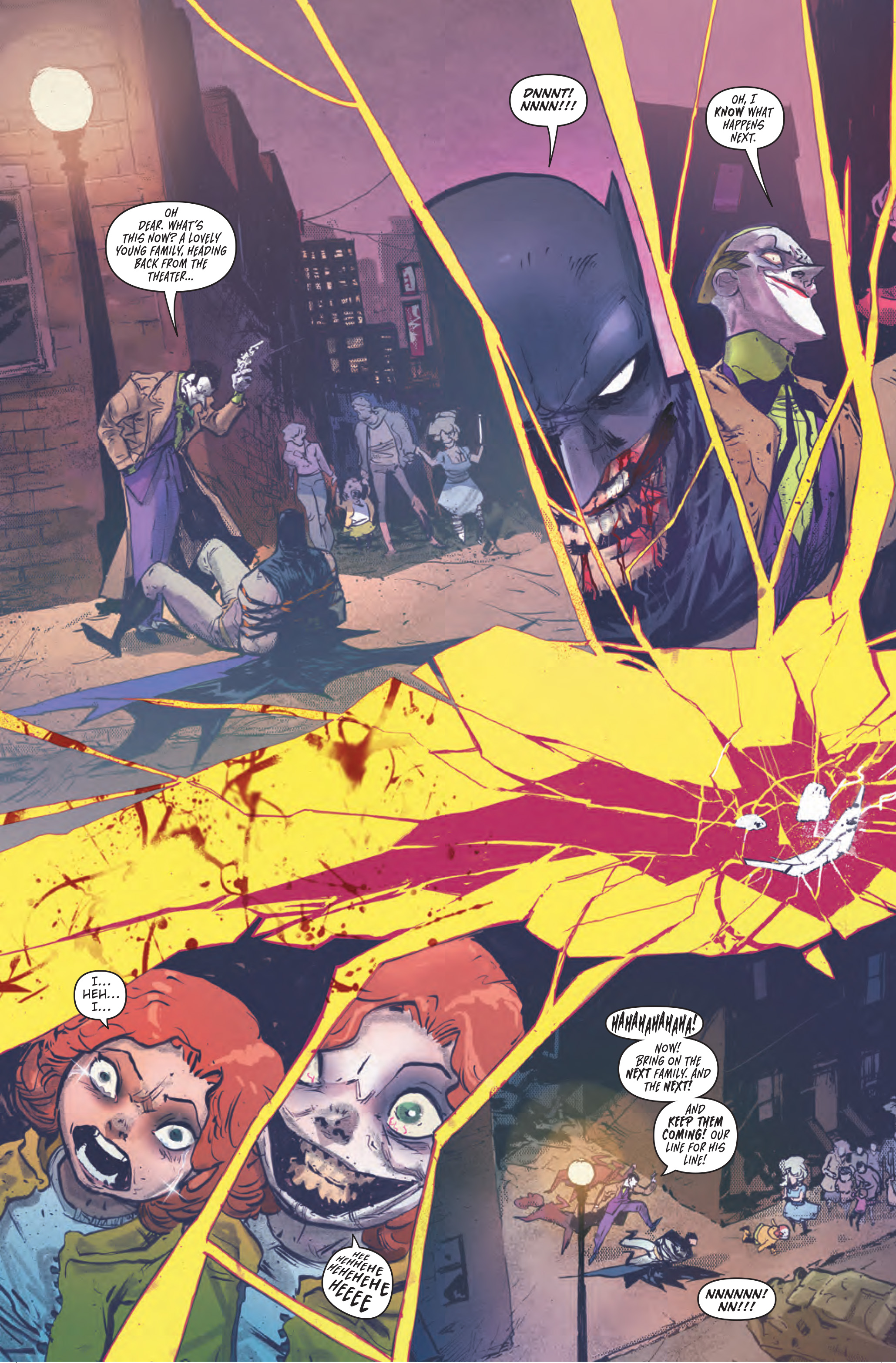 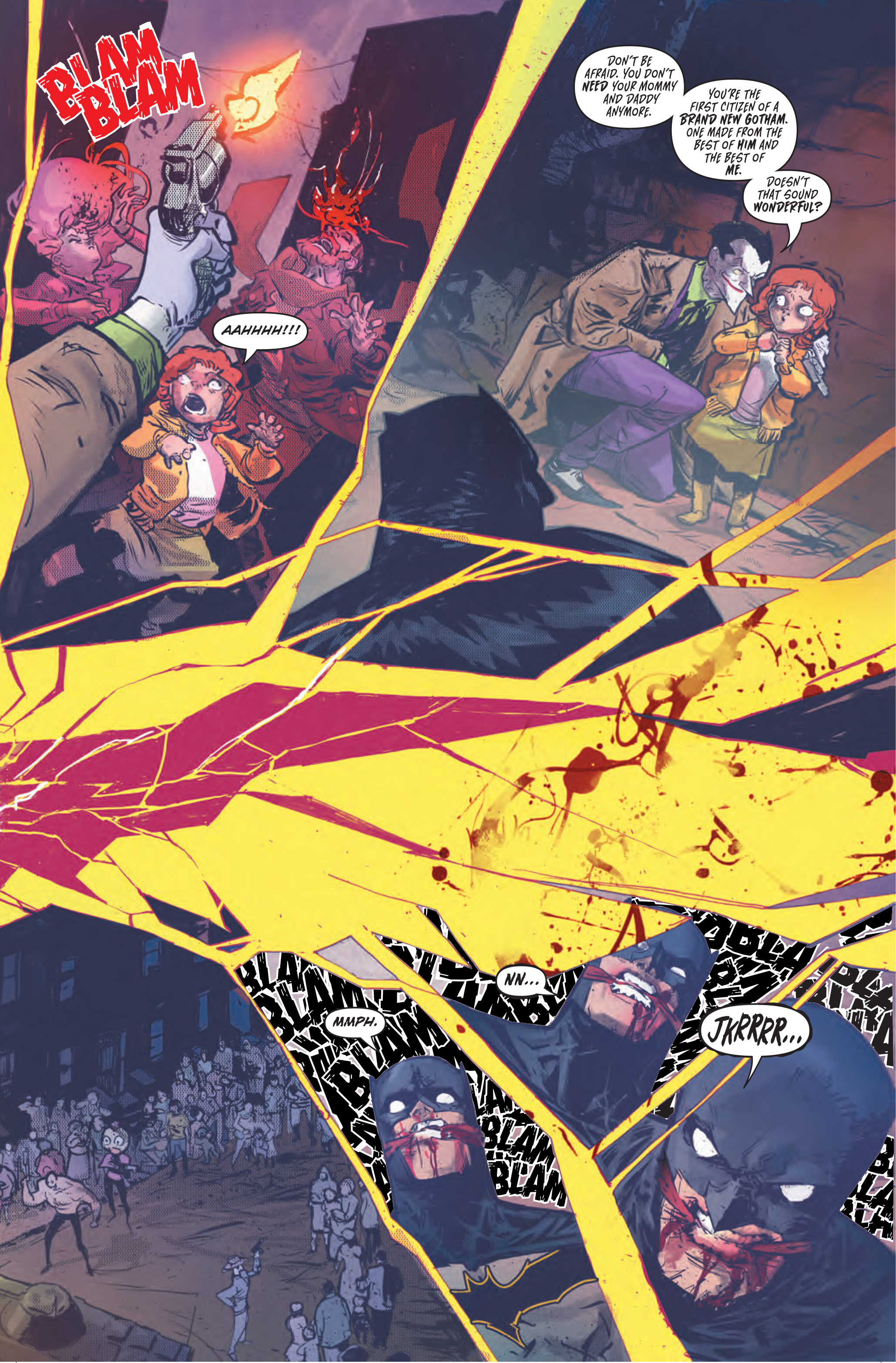 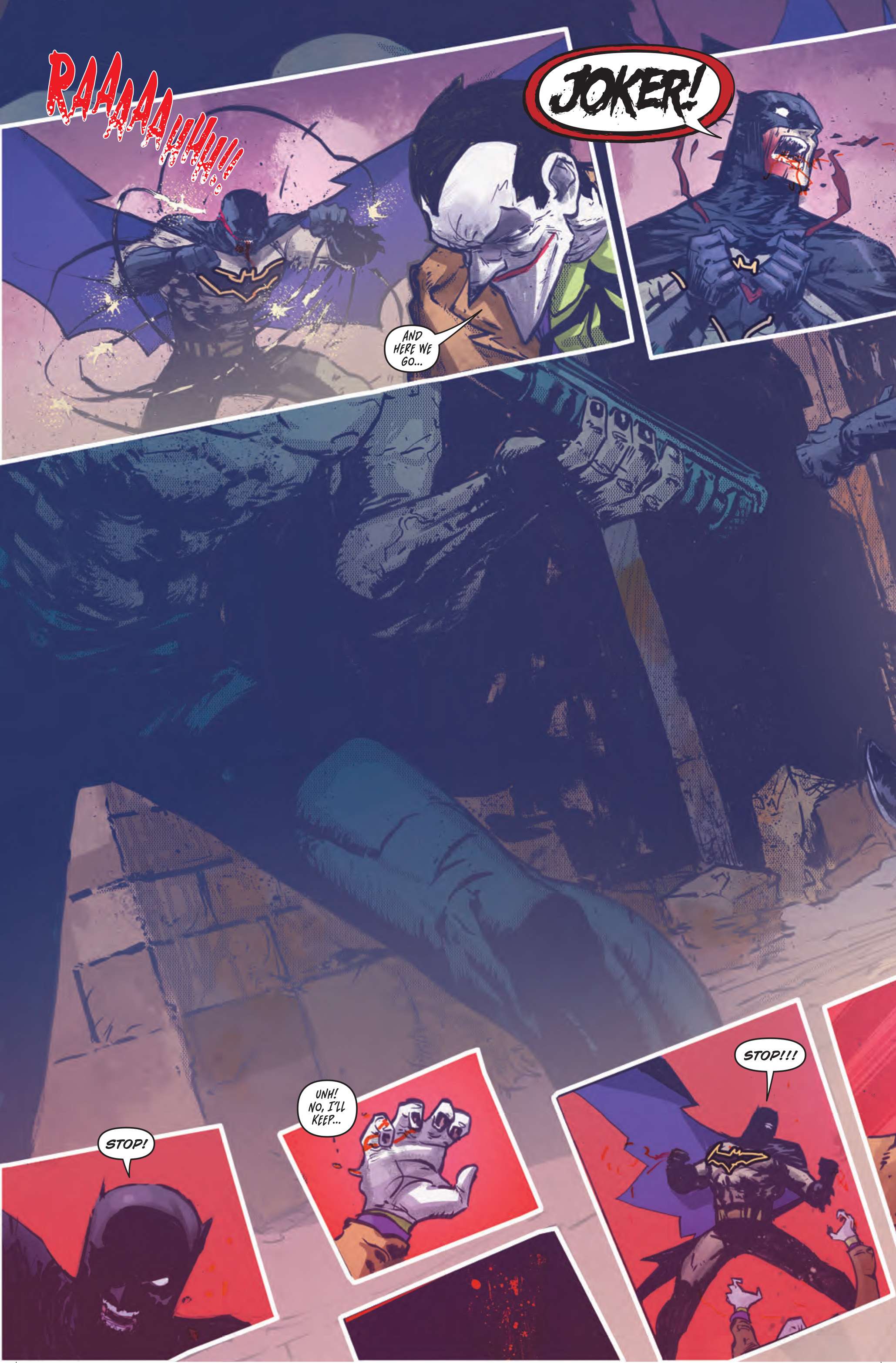 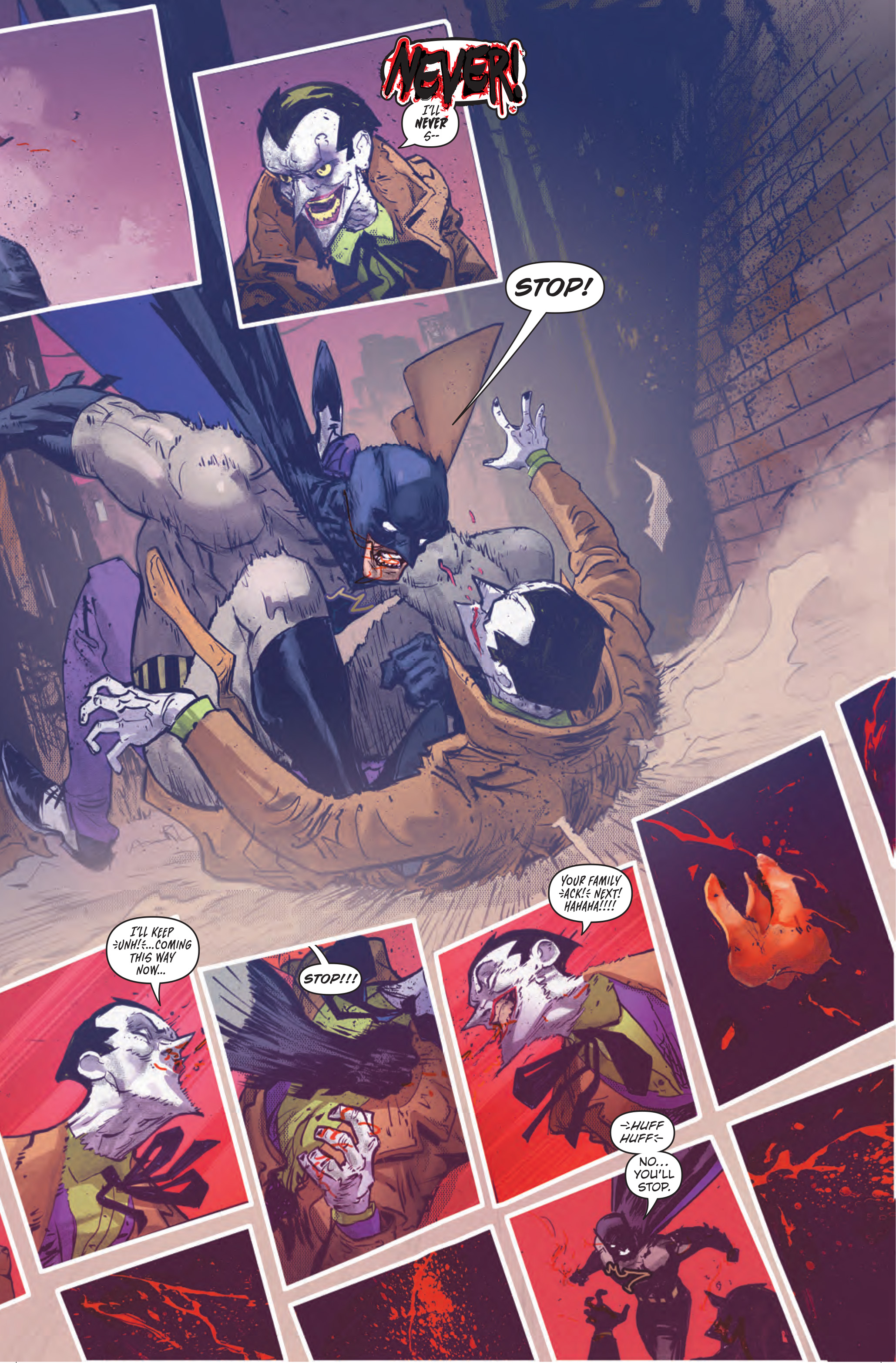 For the first time, when I ask myself “what is this Nightmare Batman’s motivation”, I don’t need an answer. Tynion didn’t need to provide one in The Batman Who Laughs. This Batman was infected with the Joker toxin and has essentially become the best parts of Batman mixed with the evil of the Joker. It makes sense that his motivation to kill is that he has no motivation. Tynion’s script is one of the best I’ve read in the Metal event so far, but it begs the question: how does James Tynion IV sleep at night?

As evil as this script is and I question the writer’s morality, the visual elements were all there. Tynion can’t take all the evil credit here as Riley Rossmo depicts these events in gruesome detail. In all actuality, Rossmo may have even more issues sleeping at night. Rossmo’s work on this book is top notch and is easily one of my favorite books to look at in this event series. The Batman Who Laughs is a nice looking evil Batman, but it’s Rossmo’s art for the initial stages of Batman being infected that I really enjoy. It’s a nice mix of Batman and Joker rolled into one.

The Batman Who Laughs #1 lived up to every expectation I had for it. There’s little to no exposition and just enough recap of what the Dark Multiverse is for new readers; while respecting the current readers. Both Tynion and Rossmo are at the top of their game on this issue. Though I do wonder, who’s moral code is brought into question here? Tynion for writing this issue? Rossmo for bringing it to life? Or us, the readers, for enjoying it?