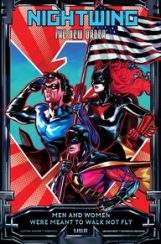 After the siege at the Grayson home, which ultimately left our favorite butle,r Alfred Pennyworth dead, Nightwing is captured and a prisoner of the world he helped build. Dick Grayson is interrogated by a tough guy, but in typical (Batman?) fashion, finds a way out. However, Kate Kane (Batwoman) was on her way to talk with Dick, leading to her unhappiness, so to speak. Dick then heads to the home of another former ally, Tim Drake (Red Robin), who hacks into the master system to locate Dick’s metahuman son, Jake. To get from point A to point B, Dick takes a detour to the Batcave, which in 2040 is a hot tourist attraction. He sneaks off, snags a bike and hits the road. Quickly, he’s attacked by John Stewart (Green Lantern) before the issue ends with a speedster reunion.

I always struggle at summarizing an issue because I don’t feel like I do it justice. Nightwing: The New Order has turned into a great story. Kyle Higgins took an intriguing concept (which yes, caught my attention, but didn’t have high expectations for), adding deep character arcs, mixed in some action and sent out a hell of a ride. Having written Nightwing before, he shows us readers that he really knows the character inside and out. Though in this particular story, Dick’s helped establish a world that doesn’t make him heroic, but you can’t help but root for the guy because you empathize with him. He’s trying to do the right thing and put his family first. How Higgins has flipped his world upside down in only an issue, and a way that perfectly makes sense, is beyond me. It works and I’m rooting for Nightwing all the way. Plus, to have the nerve to make Kate seem like a bad guy is gutsy, considering she’s a fan-favorite (I don’t NOT like her, but she’s not the top of my favorites list). There’s a lot of emotion packed in these 20+ pages, not to mention action to suffice any appetites. 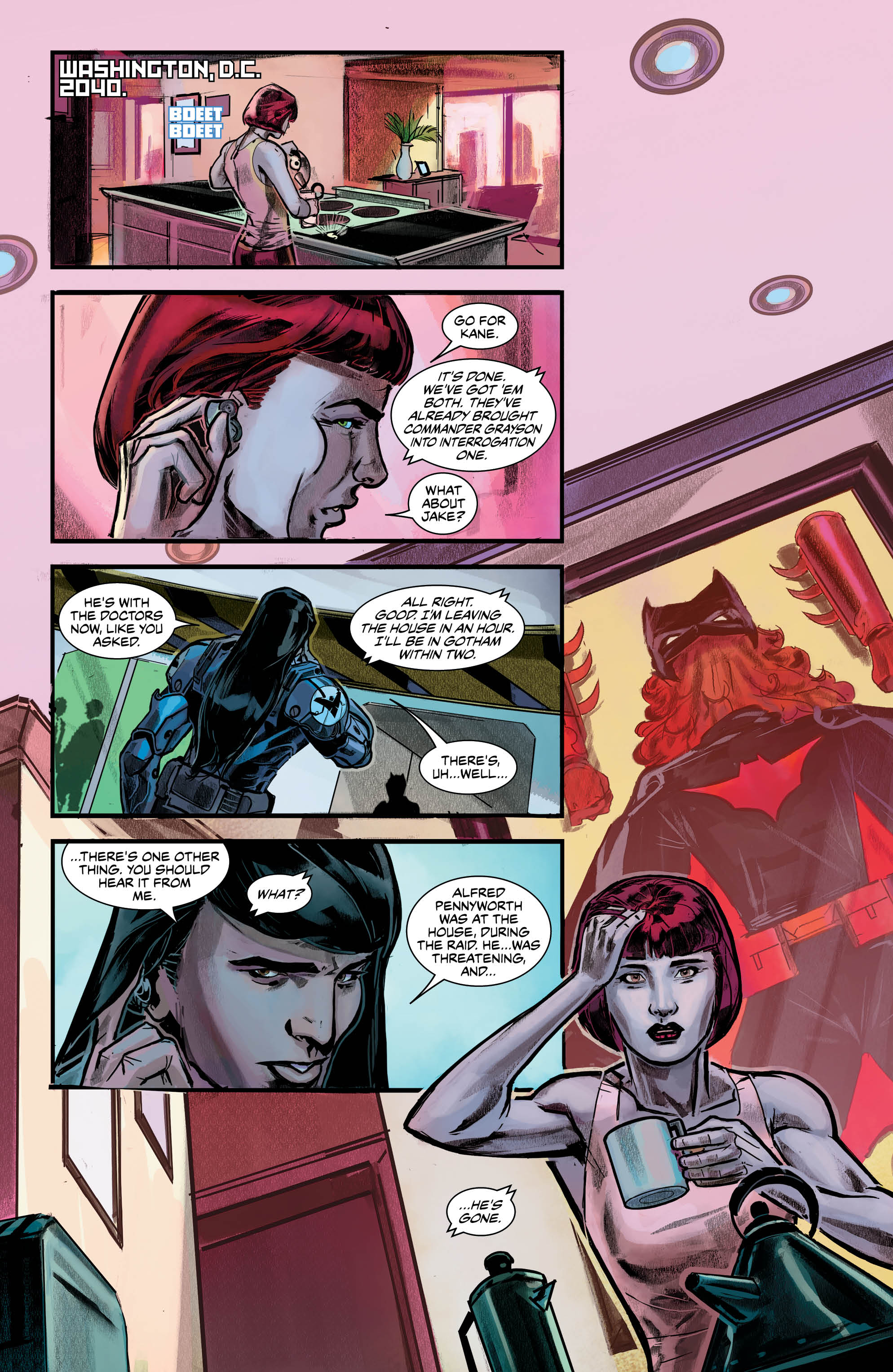 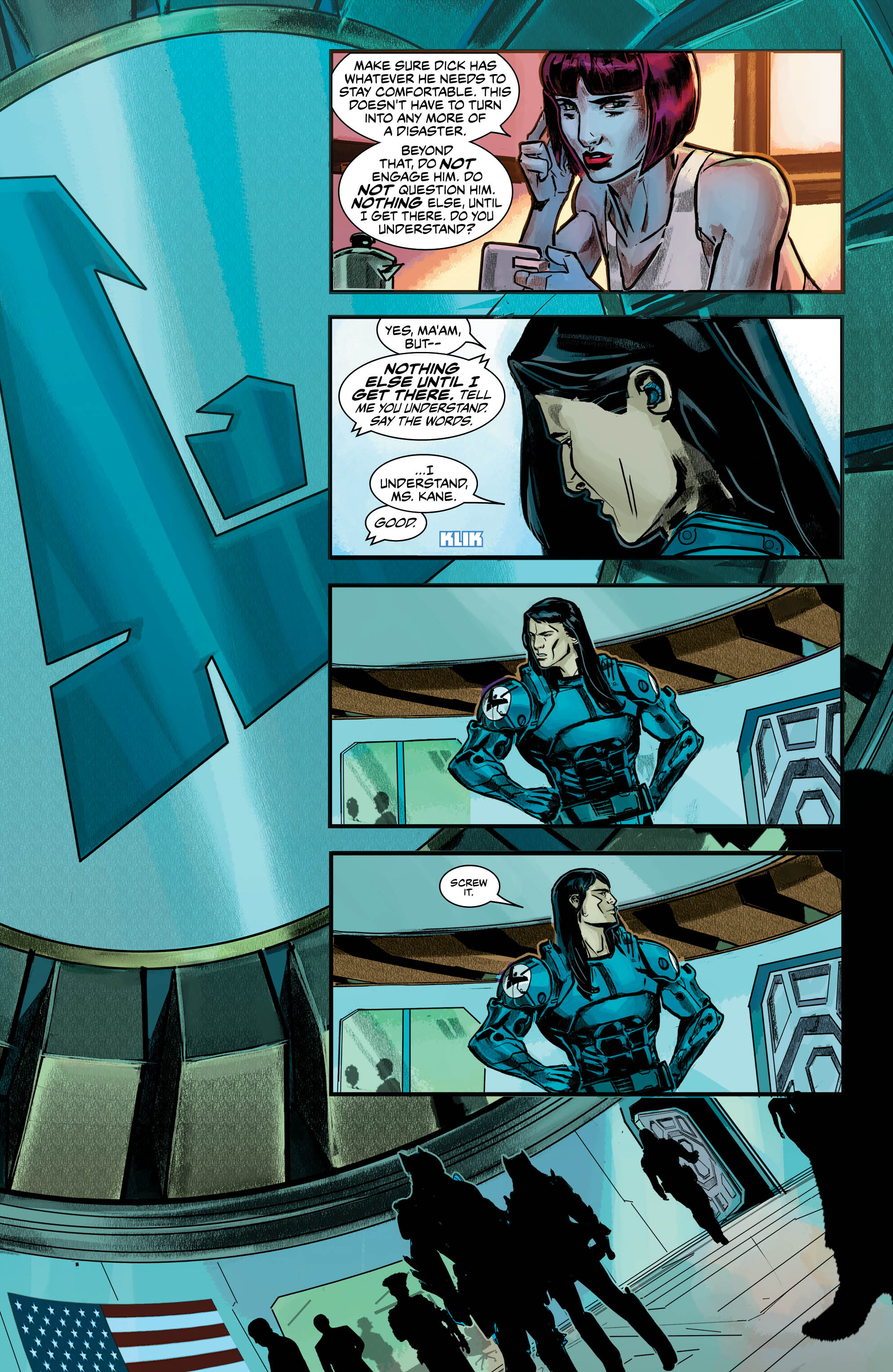 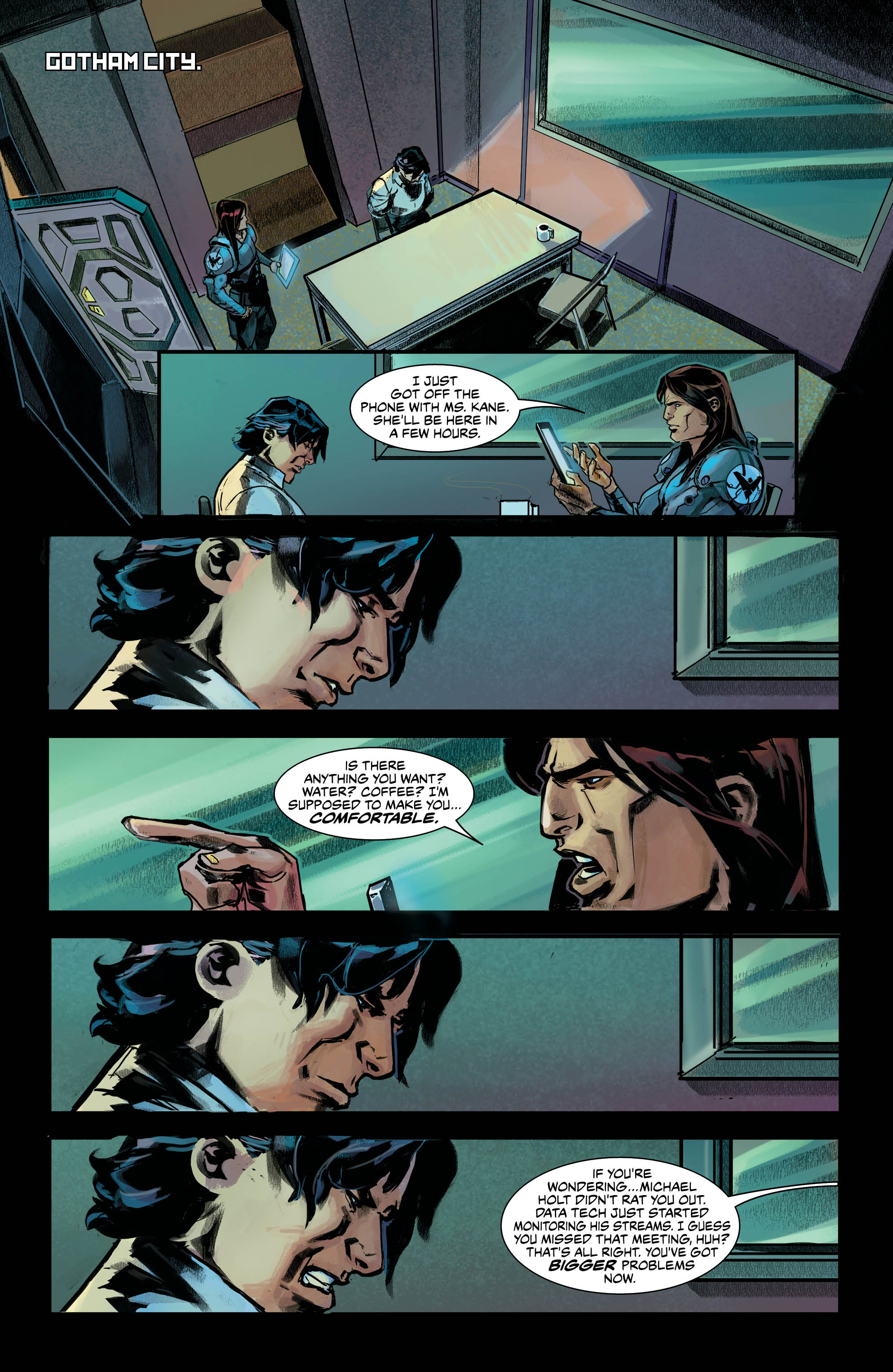 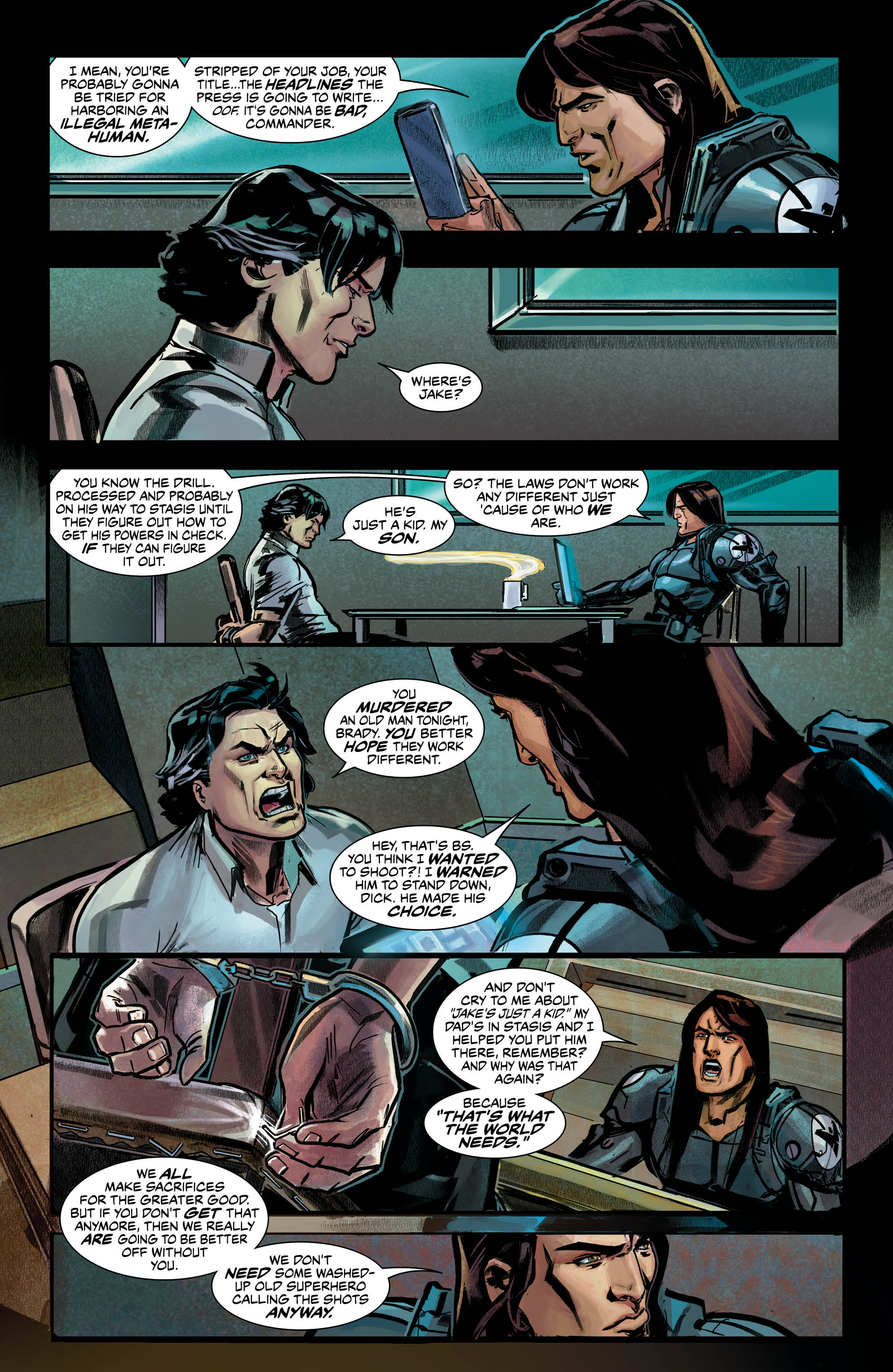 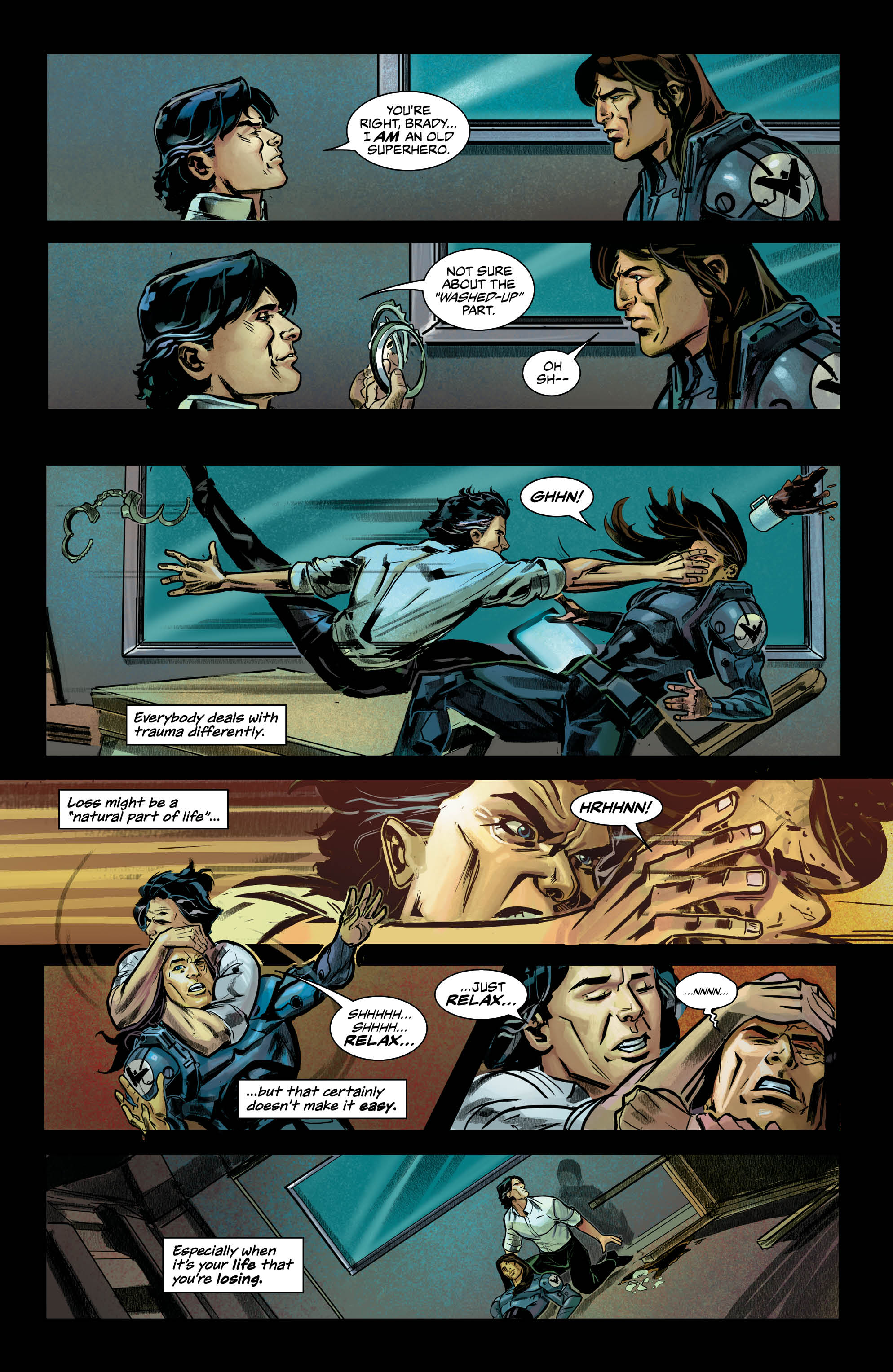 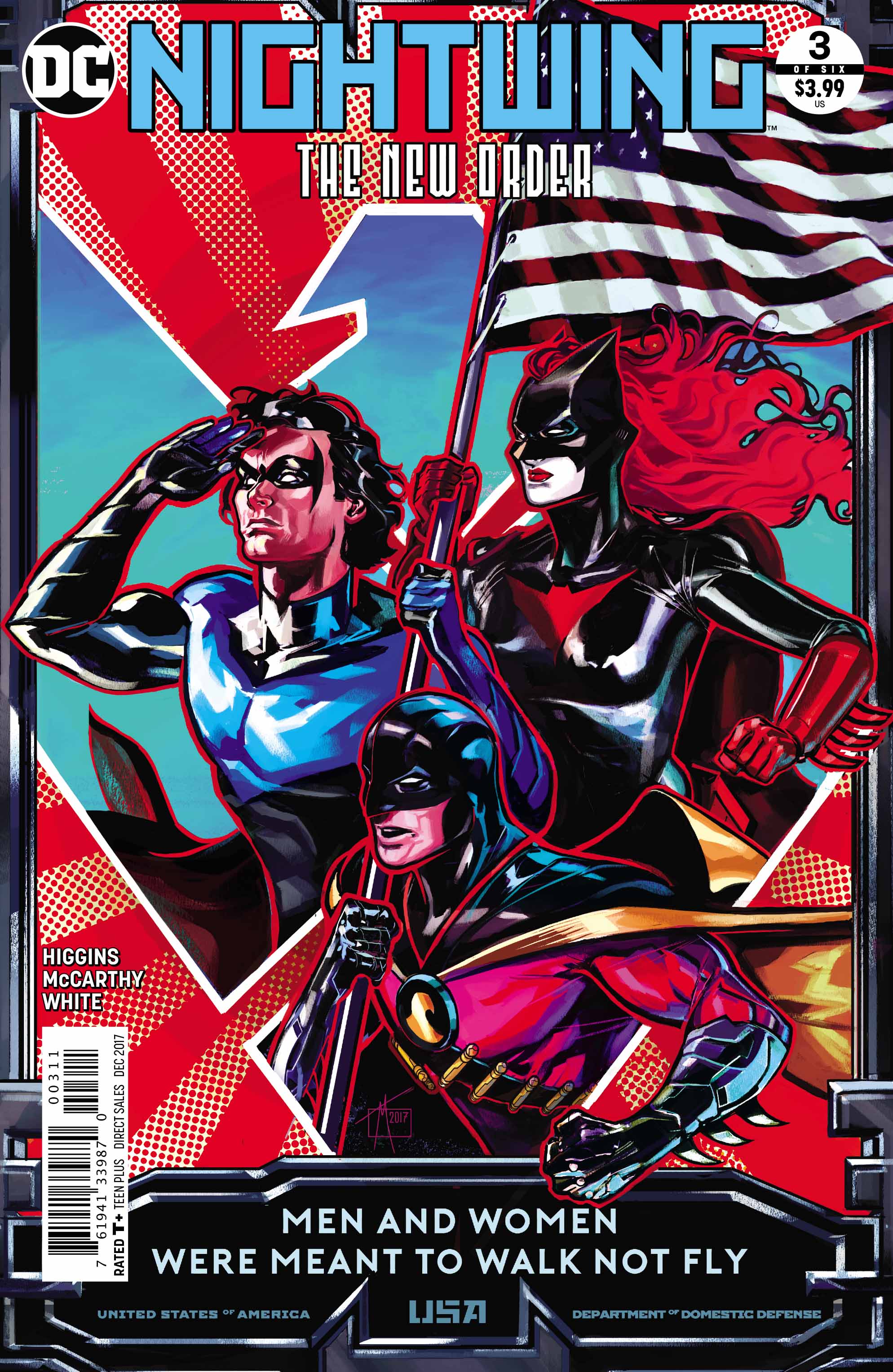 Speaking of action, it’s drawn to perfection by Trevor McCarthy. He has plenty of excitement packed inside this dystopian-ish world that lacks much brightness and relies on grim. But it works. Really well. His Grayson looks fit, acrobatic and shaggy, yet is without a doubt the character we’ve known and loved for years. McCarthy also draws the other characters well. I particularly liked his aged Tim Drake. I didn’t know who it was until his name was dropped, then had an “ah ha!” moment. Also, taking the hero to so many locations throughout a story isn’t easy, given these different settings, characters and objects. However, McCarthy again nails each panel. I can’t think of anything else that’s clever so I’ll just say: it’s great.

Nightwing: The New Order is a great else worlds story. We spent the first two issues getting to know this futuristic world and this issue makes Nightwing public enemy #1. The stakes have been raised, as has the emotional beats, and I can’t wait until the next issue already.

Doomsday Clock – The Complete Ashcan Issue, The Story So Far And DKN Fan-Art