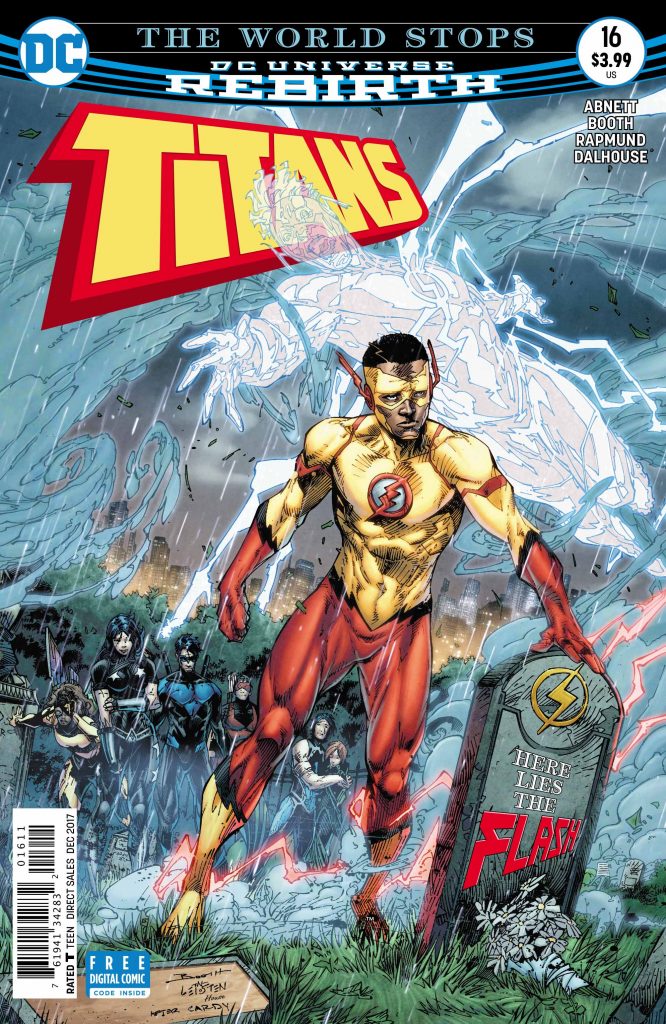 Titans #16 opens as Wally West, the young Kid Flash from Teen Titans, hears an unexpected call for help. Far away, the Titans’ Wally West, the original Kid Flash, has just suffered a heart attack after literally turning back time while saving Nightwing in Titans #15.

Preying on the traumatic loss of their dear friend Wally, and the ensuing expressions of grief, Psimon harnesses the emotional pain and psychic energy to open a portal he hopes will lead to the Titans’ demise. Adding to their distress is the presence of Malcolm Duncan, New Guardian and husband to Bumblebee, and the caveman, Gnarrk – mysteriously transported in the previous issue and now reappearing as mind-controlled minions here in Titans #16.

Original Wally’s death paired with facing freshly-turned frienemies, the turmoil experienced by the Titans does indeed unlock a portal aimed squarely at bringing about their demise. However, what or whom steps through the portal leaves the Titans dumbfounded. 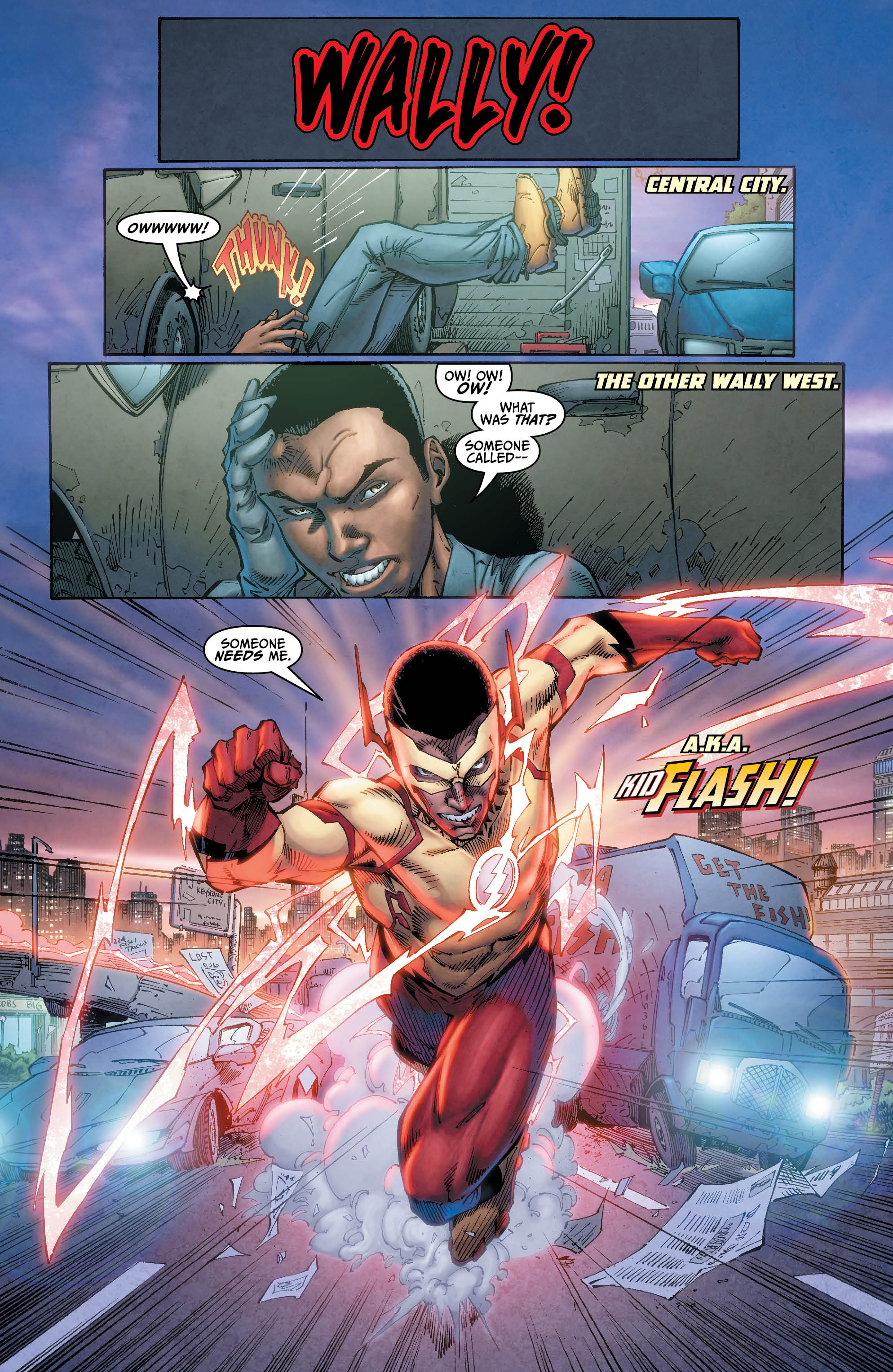 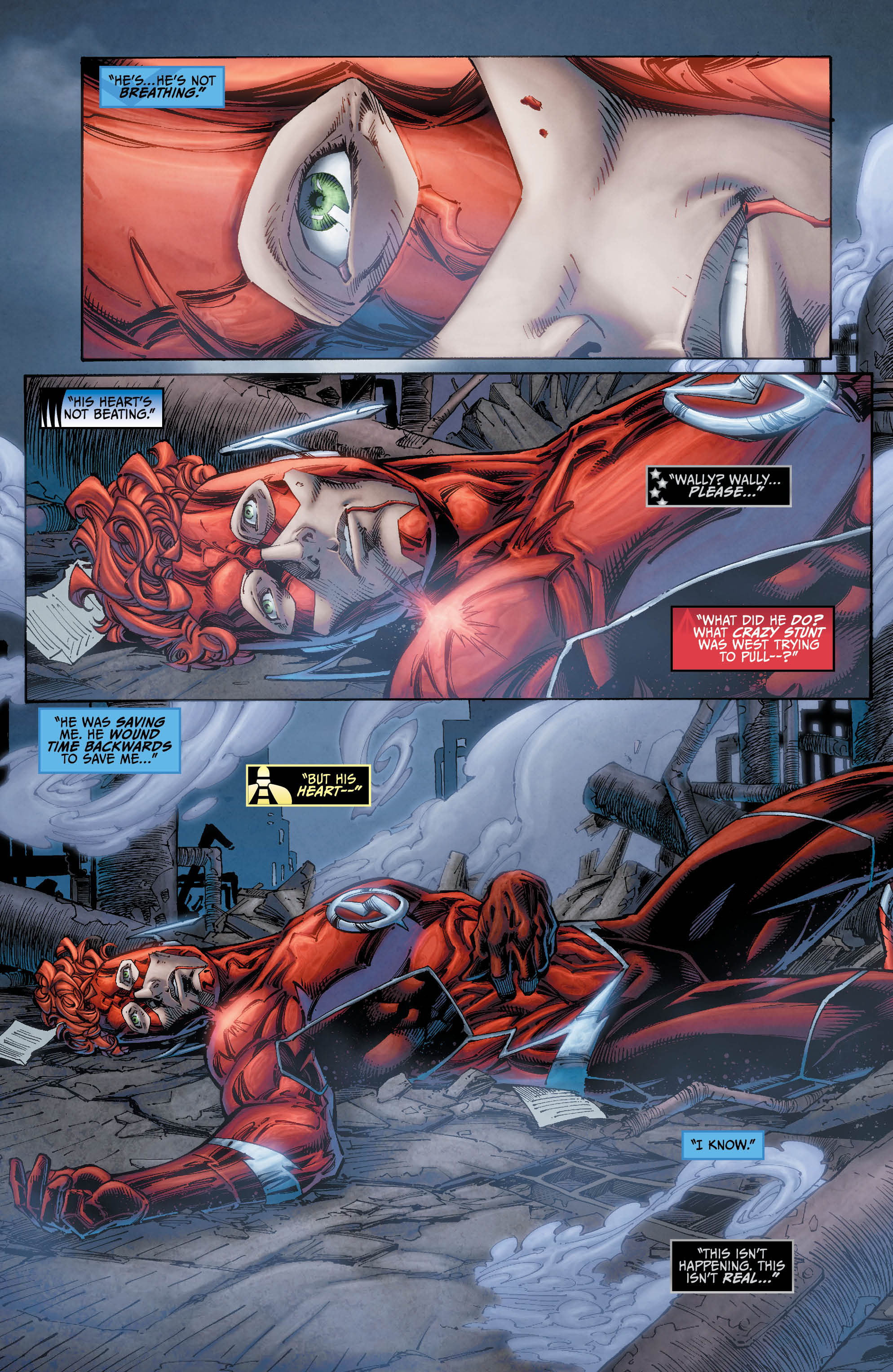 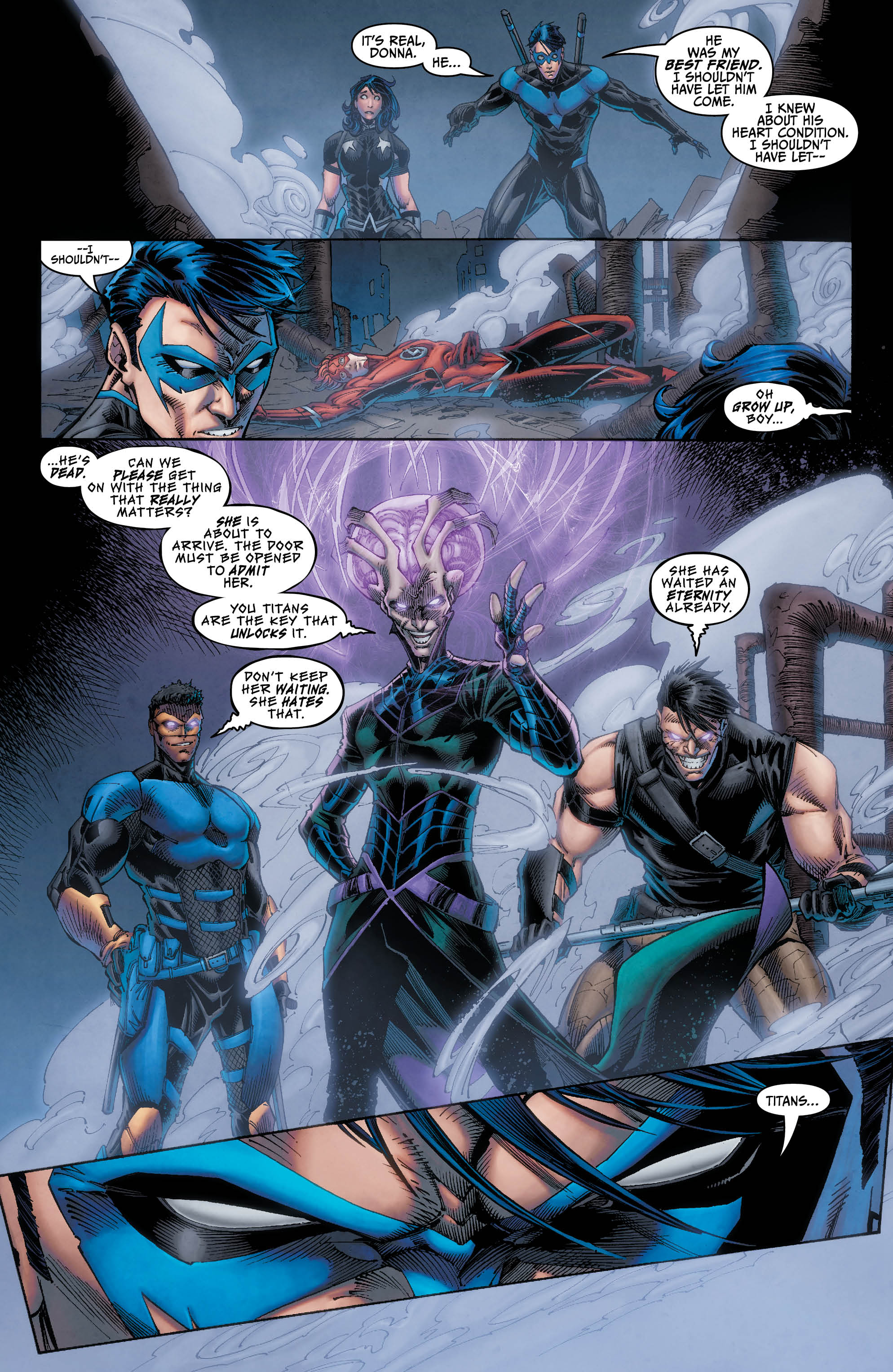 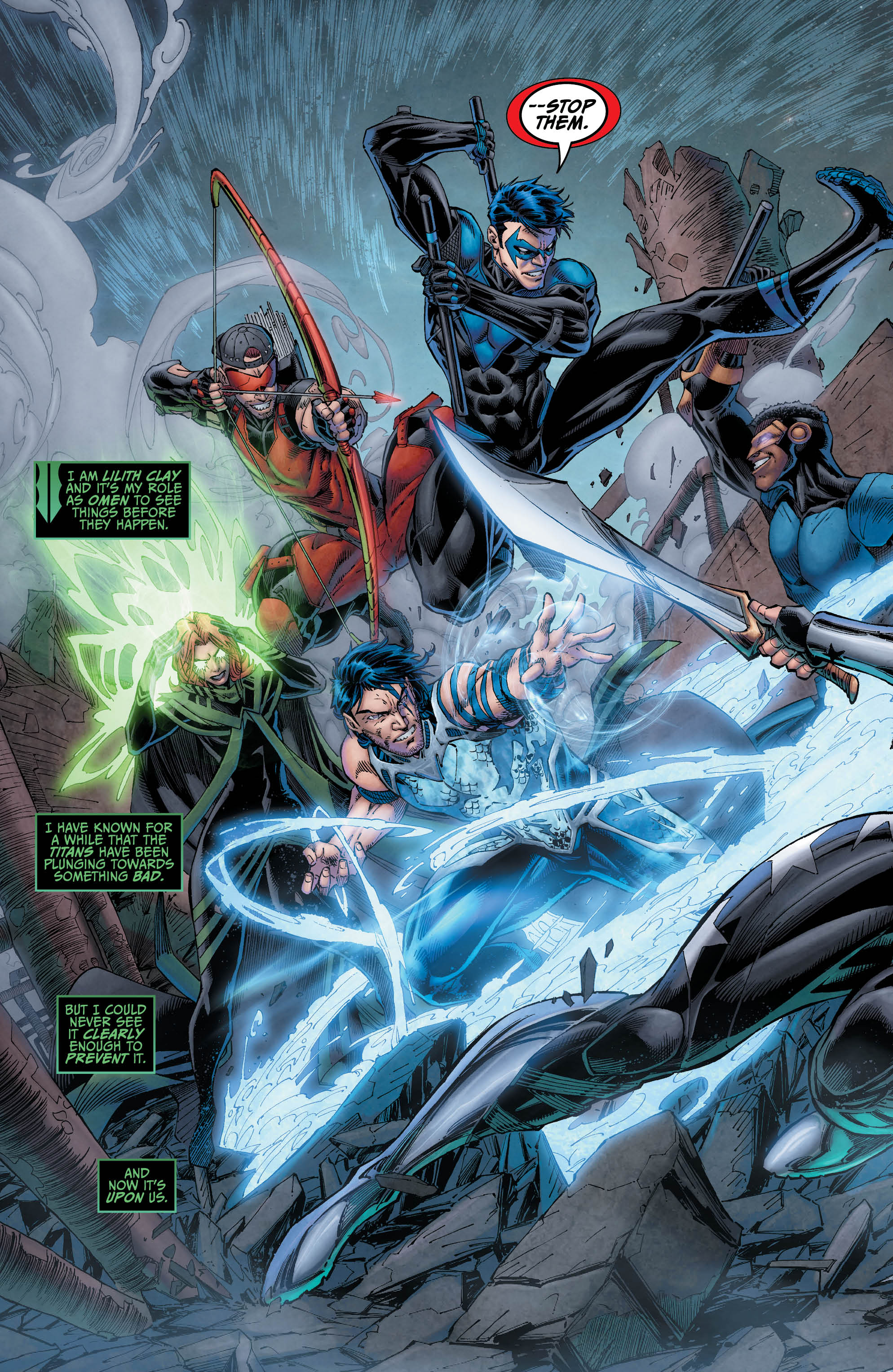 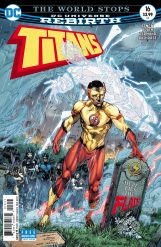 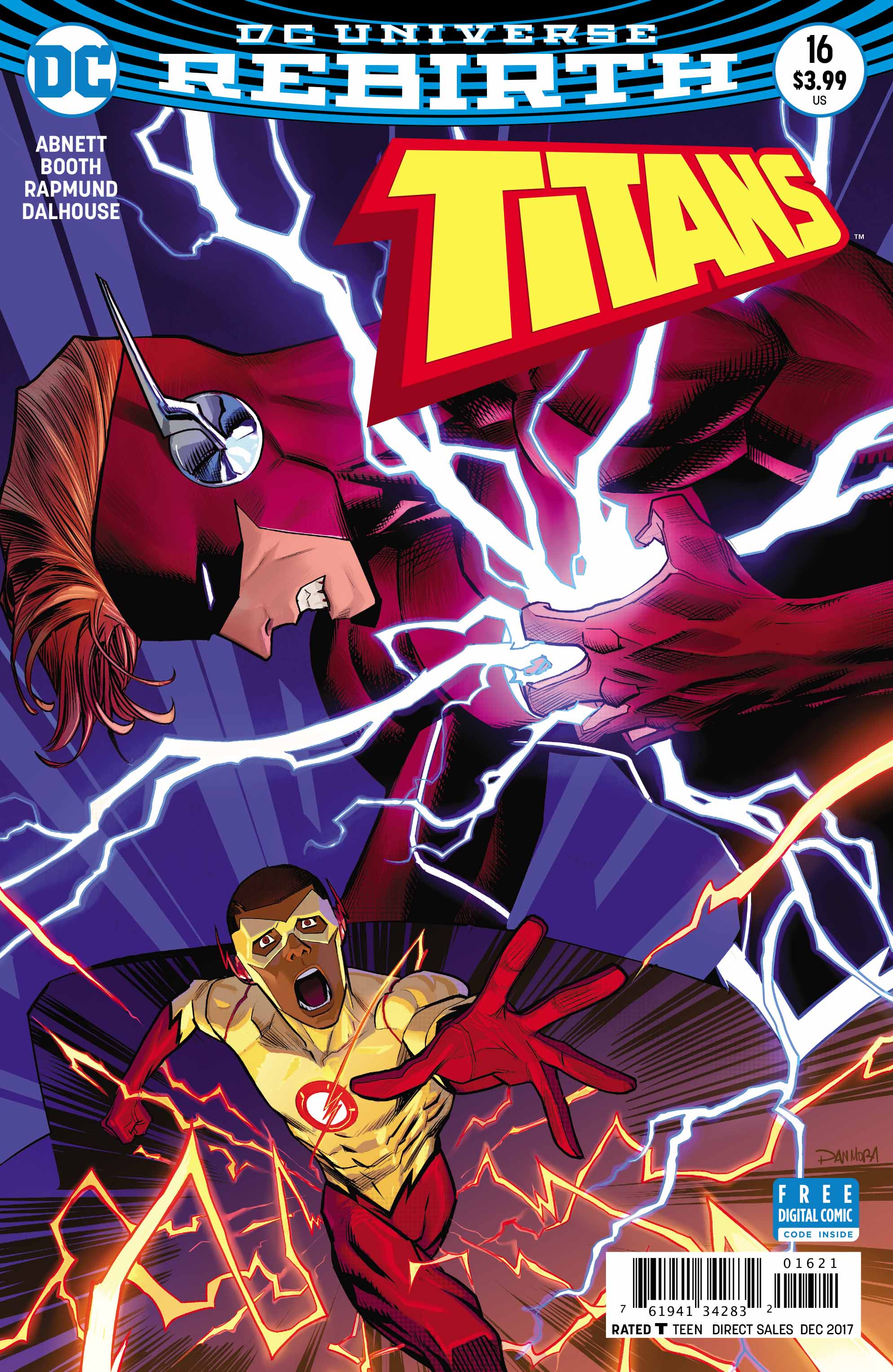 This issue left me equally dumbfounded. As a newly-returning Dark Knight News reviewer after a long hiatus, the story was perplexing. I had to reconnect with back issues to understand even a part of this unfolding story. This, however, was a joyful task. I discovered Titans is spinning a crafty tale with continuity woven into its fabric. The inclusion of young Wally West is intriguing, as the speedster arrives on the scene just as the Titans’ battle rages. I feel this is far more than a simple Kid Flash-for-Kid Flash trade. Perhaps a bigger crossover between the two Wests and/or Teen Titans and Titans is planned?

The art of Titans #16 is striking and beautiful. The panels capture the reader’s eye and move them swiftly through the well-paced issue. Team books thrive on color; it’s the only thing that distinguishes characters in the midst of the action. Titans #16 uses color well, and yet the typical brightness of Titans is rightly replaced with subtle, toned down hues. This is, after all, a darker-than-usual story.

As a standalone issue, Titans #16 lies precariously in the middle of a complicated story. It presents an awkward jumping-in point for those new to this title. However, when taken in context, it is an intriguing and intricate tale woven across issues. And, this one feels important. The art is compelling and kept me engaged in the action while I caught up on the story. A few quick searches caught me up regarding new spins on old characters, as did thumbing through a couple back issues. This issue was less enjoyable on its own. However, the story arch holds promise, though I fear the oncoming usage of an over-done plot device. Still, I am eager to see where this story goes and what lies ahead for these Titans.