Has the elevator ever been broken in your building and you need a faster way to get to your floor?  Or are you like me and want to make a dramatic entrance by bursting through the skylight with your cape spread out?  Well, worry no more, since we now have a functioning Batman grapple gun, courtesy of YouTuber The Hacksmith.

Spending six months designing, building, and testing this all important part of Batman’s armory, he and his team were finally able to get one working.  The gadget is powered by a pair of 2.7kW electric DC motors, and weighs 15 pounds due to a pair of 6,200 maH lithium polymer batteries.  The battery charges will run for fifty 65-foot ascents or descents.  Not quite the light, compact gadget we’ve seen in the films… 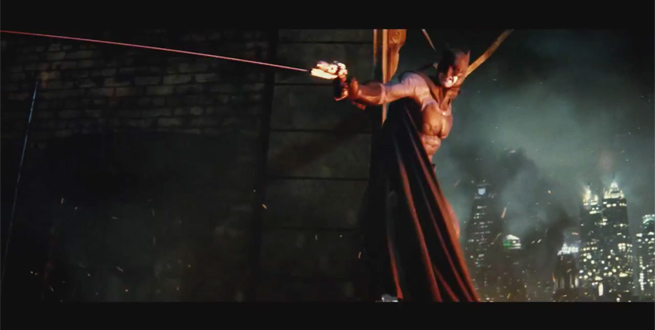 Batman quickly grappling away from Doomsday in Batman v Superman

The prototype gadget cost over $3,000 to build, not including the labor and machinery to create the grapple gun.  So while this real life grapple gun might not be as sleek and sexy as Batman’s, or as affordable as some might like, this proves that it’s not quite out of the question to prowl the rooftops of a city near you.

The Hacksmith also made a Captain America electromagnetic shield replica, which you can see here.

Now if you’ll excuse me: