Here it is! It’s that time of the year….again. DC has unveiled what is to come this June in their April 2017 Previews catalogue! As my fan anticipation increases for this impressive lineup, I fear my bank account will slowly plummet. If you wish to check it out for yourself follow the link right here: June 2017 Solicitations. The image below is the official image relating to the announcement! 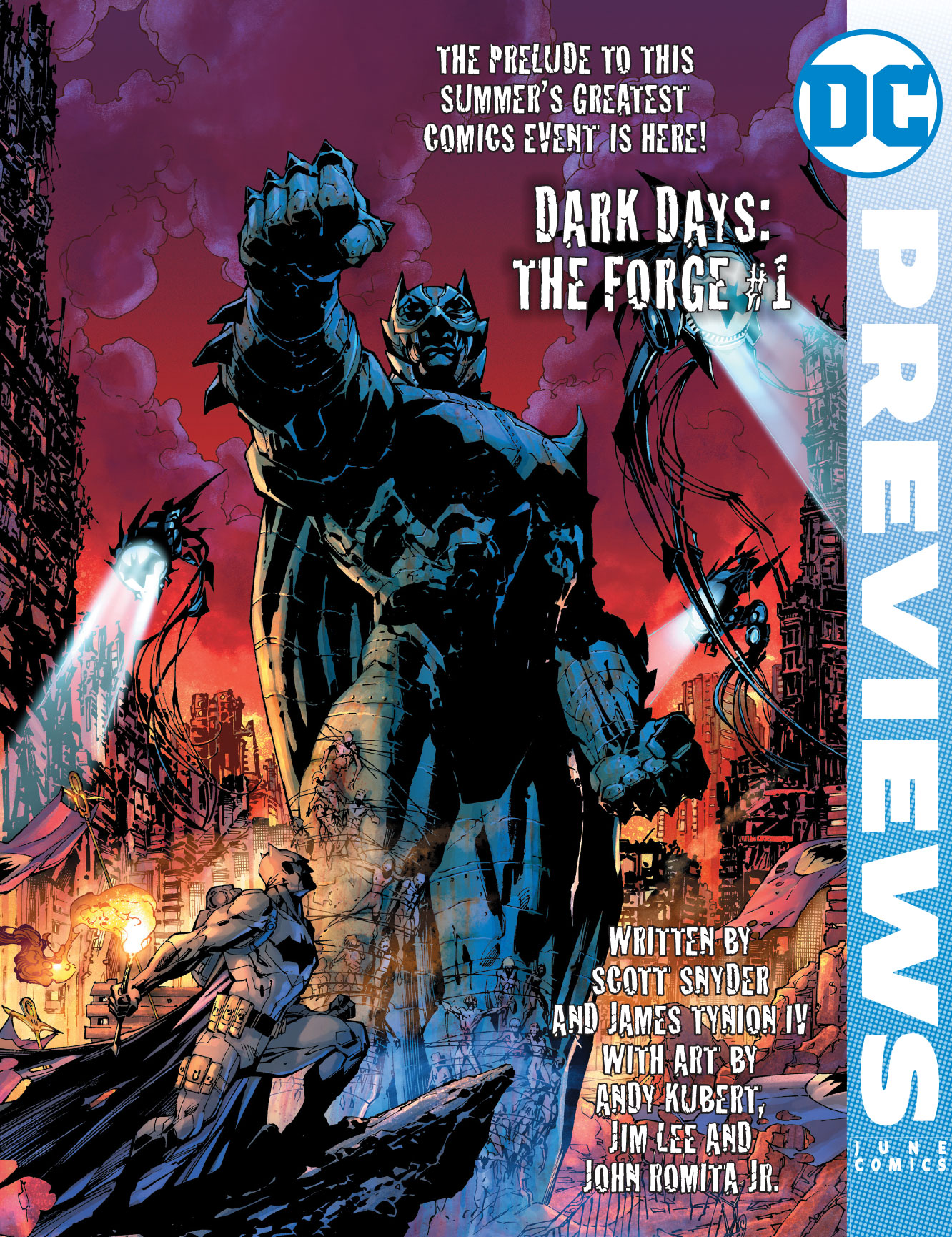 Find out all about what DC has coming up in June 2017 with the April 2017 Previews Catalogue. This month, darkness comes to the DC Universe with a groundbreaking new mystery beginning in DARK DAYS: THE FORGE #1 by Scott Snyder, James Tynion IV, Andy Kubert, Jim Lee and John Romita, Jr.! But don’t worry, not everything is dark at DC!! Also in June are six wacky DC/Looney Tunes crossover specials starring Batman, Elmer Fudd, Wonder Woman, Tasmanian Devil, and more. And a Steve Trevor one-shot hits shelves with WONDER WOMAN: STEVE TREVOR #1. The April Previews Catalog also includes the rest of the June on-sale comics, plus trade paperbacks and hardcovers, new items from DC Collectibles and more!

Obviously, the thing that has gotten me on the hype train the most is Dark Days: The Forge #1! The cover alone (seen above) makes me so ecstatic for this story arc and having well known writers Scott Snyder and James Tynion IV scripting it feels phenomenal.

DC has also unveiled a plethora of very unlikely crossovers. Now I won’t reveal all the crossovers because that is something I’ll let you discover for yourselves. We’ve already had a good taste of bizarre crossovers with the Justice League and Power Rangers series by Tom Taylor. But that was just the tip of the iceberg. In June, DC will be releasing various crossovers series featuring characters from DC, and Looney Toons. Yes, you read it – Looney Toons.

We’ll be seeing characters like Batman and Elmer Fudd going against each other,  Jonah Hex and Yosemite Sam teaming up and Martian Manhunter with Marvin the Martian! It sounds very strange indeed, but it just opens doors for some unique and interesting storylines.

June is certainly going to be one fine month for DC fans and Looney Toons fans as well. Better start saving up soon. Excited for Batman: Dark Days? Can’t wait to see the worlds of Looney Toons and DC cross paths? Then please share your comments below!