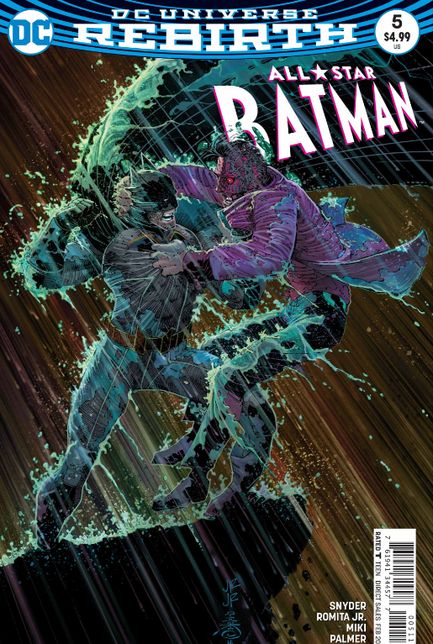 The road trip from hell comes to an exciting, satisfying end. All Star Batman #5 picks up right where the last issue left off (a month and a half ago!) and it hits the ground running. Facing an angry, violent, anti-Dark Knight mob, our hero finds a way to get himself, Duke Thomas, and Two-Face sailing down the river. Meanwhile, Commissioner Gordon and the GCPD are closing in on the Batcave while Alfred is sweating bullets, the Penguin is comic relief, and KGBeast should never be underestimated.

That’s summarizing a jam-packed issue as best as I can. This has been one hell of a journey that Scott Snyder and artist John Romita, Jr. have taken us on. It’s got action, emotional weight, and is complex. When Snyder writes monthly titles, it can be hard to remember the beginning by the time you reach the end. Therefore this story, like his others, will benefit when it’s released in trade so you can read it in one sitting. Just make sure you reserve plenty of time for that sitting.

“My Own Worst Enemy” also speaks to many levels of this story. It relates to Batman, Harvey Dent, Two-Face, Alfred…you name it. It’s reaching on a physical and emotional level. Batman always has seeds of doubt on himself, but this extends to even some of his closest allies. It’ll be interesting to see if the events of this arc will affect some of Batman’s personal dynamics with others later down the line.

Of course you can’t talk about the Dark Knight without mentioning his villains. While we haven’t seen many of the A-list bad guys, we’ve seen nearly all of the B, and C, listers. Seriously, go back through and count how many. Even this issue manages to sneak in a couple more that ought to bring a smile to your face.

This was a great story for Snyder to choose to follow his “New 52” run. It’s a very different vibe than anything we saw in those issues, not to mention a completely different look and tone from what’s going on in the “Rebirth” Bat-titles. Romita, Jr. had me from the first panel back in issue #1. His Batman is distinct, different, and craziest of all: fits in the daylight!

Overall, All Star Batman #5 brings this exciting journey to a pleasant conclusion. Many questions are answered, leaving relationships open to be revisited in later issues. Multiple readings will only benefit the story, especially once in a collected book.