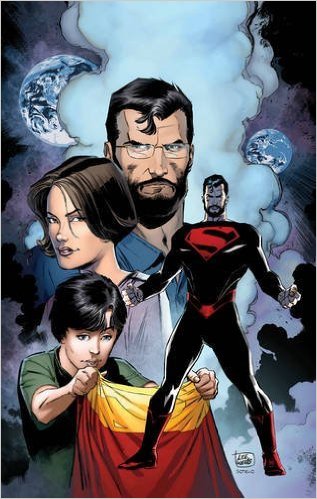 Although it’s not represented on the sample image of the cover art to the left, this is the first trade paperback that I’ve seen to bear the “Road to Rebirth” banner. I find that to be highly appropriate because no other title in the year leading up to the relaunch so perfectly segued into it.

Spinning out of the events of Convergence, pre-Flashpoint Superman and Lois Lane find themselves inhabiting The New 52 universe along with their son, Jon, and start a new life as the White family. Operating from the shadows, Clark averts crises wherever he can. Lois pens controversial books under the alias “Author X,” which may get her into trouble. Who am I kidding? Of course she gets into trouble.

Said trouble comes in the form of Intergang, who will stop at nothing to silence the fearless investigative writer. Thanks to these hoodlums, a conspiracy thriller element is added to the mix. Compound that with the bucolic nuclear family dynamic that added a previously unseen dimension to Superman stories and you’re left with a book that I simply could not put down.

I guess we have Dan Jurgens to thank for that, a man who has written countless Superman tales, and may never run out of fresh ideas. His vision is strengthened by Lee Weeks, whose artwork brings a certain timeless quality very befitting of this version of Big Blue (or Big Black and Silver, in this case). And let me also say that Brad Anderson’s colors remind me of the late great Darwyn Cooke, adding a measure of optimism.

Batman’s inclusion in the book is minimal, yet entirely necessary, at least in my view. It kind of gave us a teaser of what we would see develop between the two in Final Days of Superman and various Rebirth titles currently ongoing. Batman and Superman are certainly no strangers to being best friends, so it was kind of cool to see Clark give this Dark Knight he had never met the benefit of the doubt based on the rapport established with the one from his universe of origin.

There are several smaller threats peppered throughout the book that weave into a larger tapestry while testing Clark’s abilities in a variety of ways. The battle with Hyathis, the closest thing to what I would call the big bad of this story, doesn’t have much of a definitive conclusion, so I wonder if Jurgens will reprise this rivalry in a future arc of Action Comics.

Without a doubt, I think Superman: Lois and Clark is required reading for anyone reading the Rebirth runs of Superman and Action Comics. I honestly believe it to be one of the best Superman stories of this decade and it deserves to be mentioned in the same breath as Earth One and American Alien.