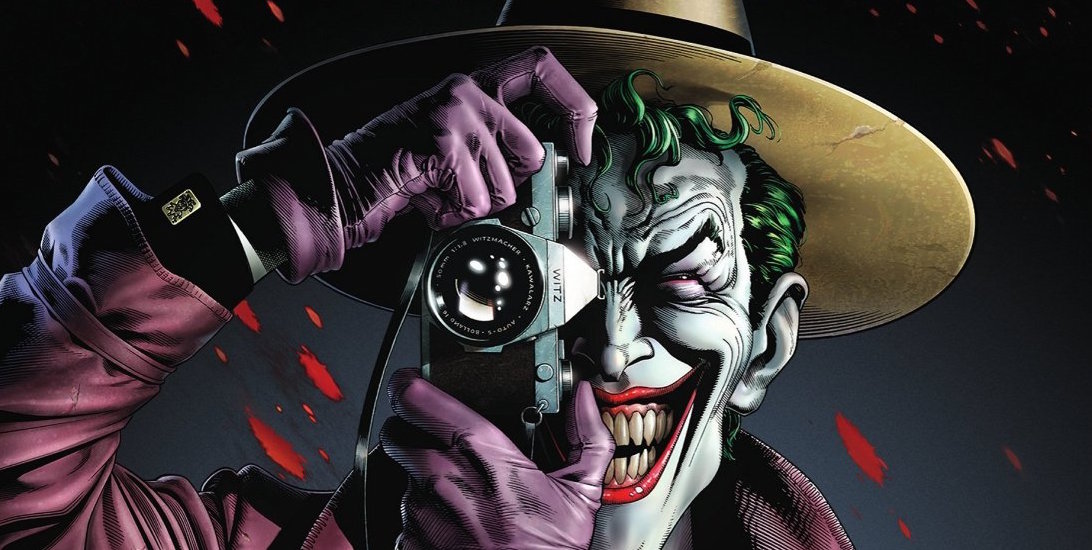 What a joy to be a Batfan. Last Friday, one of the most iconic graphic novels of all-time was adapted into an animated feature and premiered in front of a crowd of over 2000 Batfans. I was in attendance. There was a panel that immediately preceded the movie.

Due to the R-rated nature of the film, Comic-Con programming pushed the premiere to 9PM and even then, decided to alter the usual plans by having the panel before playing the movie, while a brief Q&A with the crew was held following the premiere.

The panel opened up with a question from the moderator, WB Home Entertainment PR Gary Miereanu about the original material added to the Killing Joke. As Bruce Timm is explaining the process behind it, Miereanu received a call from none other than Mark Hamill himself.

Placing the call on speaker and putting the phone to the microphone, you hear Hamill’s raspy vocals emitting from the speakers, greeting the crowd in a sing-songy tone, “It’s me.” As expected, the place erupted into raucous applause and squeals of approval. He expresses his honest regret about not being present at the premiere because it will be shown to “possibly the best audience it will ever have.” Cheers and applause immediately follow. Hamill expresses his gratitude to everybody for the support since Batman: The Animated Series. He proceeds to explain that he’s always wanted to do the Killing Joke since the end of B:TAS, where they wished aloud if they could do one last Joker story and have it be the Killing Joke. And he then “passes” over the phone to the Joker to more raucous applause. The phone call ends in his trademark cackle.

Bruce Timm continues on as if nothing happened, explaining that they needed to fill half the movie and the decision came to expand Barbara Gordon’s role. He explained that he was unhappy with the fact that her role was very limited, really doing nothing and then something bad simply happens to her. Brian Azzarello corrects him, quipping that Barbara serves her father cocoa. They anticipated that there will be people who will watch the film who are not comic book fans and will not know who Barbara is before this horrific thing happens to her, therefore she was given a character arc, adding the caveat that it’s not directly related. Azzarello adds that everybody has a character arc, but her and that she deserves it.

Miereanu asks Tara Strong about how she approached this movie considering the material. Strong reminisces on when she first booked the gig and how she was beside herself working alongside Hamill and Conroy. She explains that at the time, Barbara was basically a girl and in this movie, she’s an adult and that she will go through some “stuff.” She acknowledges that the material is really dark and that she feels the best Batman stories are in fact dark. She explains that the actors go to emotional places that they never went to before in it. She admits that she cried when she saw it. She expresses that she loves the movie and expresses the hope that the audience does as well.

Miereanu directs the next question to Liu, Timm, and Azzarello. Miereanu admits that having seen the movie multiple times, he had to reread the book. He comments there was so much added between the panels and sometimes believed that what was added was actually originally in the book and asks about how they added it all. Azzarello answers succinctly, explaining it really was just a matter of figuring it out, which was a difficult task because the original story is “so tight.”

Azzarello couldn’t provide an explanation, but continued that Barbara prequel just made her a richer character. Timm explains that with all that time spent with her at the beginning prior to her opening the door, it made people more invested in her. Liu comments about receiving the script and felt the choice to add the prequel was smart. He also expressed that the prequel made it so that viewers can better ease into the really emotional and psychological stuff that make up the core of the movie. Liu explains that the prequel was a smart decision because it allowed you to understand that she was also a hero and a partner. He went on to praise the voice actors, how they’re more so actors because they added so much emotional texture. Azzarello chimes in and adds that it was different typing it from hearing it. He jokes that when he first heard it, he said, “Woah, I wrote that? I got some emotion.”

Miereanu then addressed the man himself, Kevin Conroy. He explained that Mark Hamill has always said that every Joker role is different for him and asks if it was any different for Conroy. Conroy explains that the most important thing for him over the years was keeping him consistent and true. Conroy praises the fans for being amazing for knowing so much about the characer. He explains that, “You would hear in a second, if I was being inauthentic.” It’s always been his goal to keep him real and “base him in the tragedy of his childhood,” from which his passion comes. Being that this story was more so about conflict rather than action, it allowed him as a actor to really go to places he couldn’t go to before.

Ray Wise is then introduced. Wise was involved in the first DC animated movie, Superman: Doomsday where he played Perry White. Being that he’s the newest member of the group, he enjoyed starting fresh as Gordon. He then switches gears and expresses his love for Batman and how he’s been a fan since he was a child. He jokes about how his ethnicity makes it so that he just loves bats. He concludes that despite Batman’s multiple portrayals, Conroy is “the only Batman for me.” He continues that this role was not easy considering what Gordon goes through, briefly exploring the character’s struggles as a father and police commissioner. He mentions all the groans and screams that he needed to do for the role. He praises the film and concludes that “you can feel the acting… and I’m proud to be a part of it.” Miereanu mentions his role of Leland Palmer from Twin Peaks, to which Wise announces that Twin Peaks has finished filming, he appears in all the episodes and that it will premiere next summer.

The next discussion is of Mark Hamill and his performance in the role. Azzarello comments, calling it “chilling” and that “all the Joker stuff he’s done before was leading to this.” Azzarello talks about how as a comic book writer, he was in awe to hear his words performed by the actors. Timm talks about he and Liu have seen the movie multiple times through production, but every so often, they’ve stopped to really process how good Kevin Conroy was. He knows Kevin and he knows he can rely on him, but his performances were really good. He adds that that also applies to Hamill, describing it as “still the same old Joker you’ve always heard, a little bit scarier.” He adds that he “makes him seem almost human,” referring to the flashbacks. Strong launches into her Harley Quinn impression, asking if Hamill will call back, since he didn’t say hi. 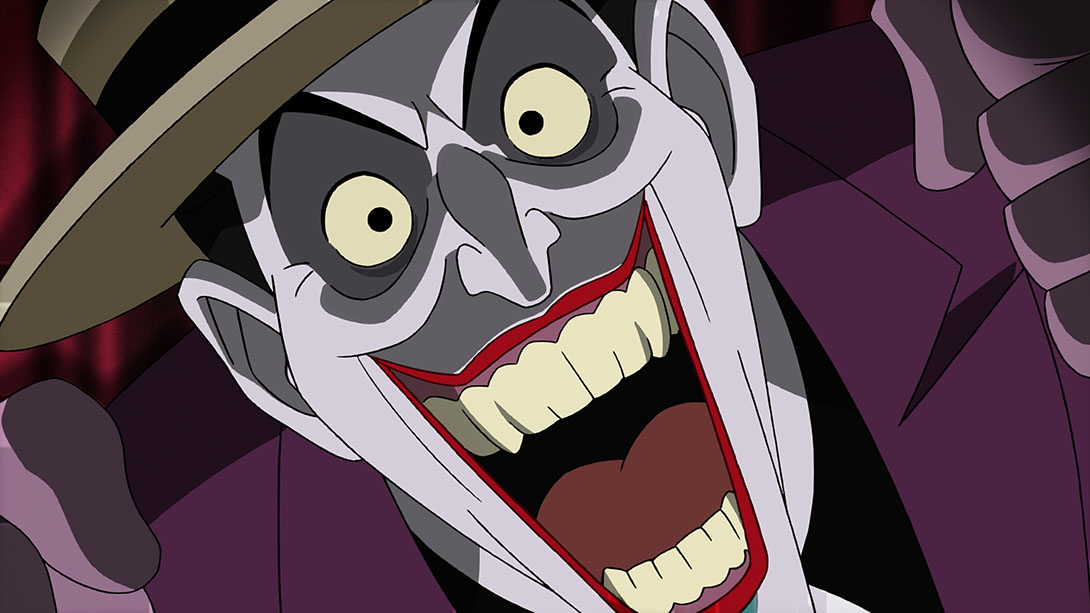 The voice director Wes Gleason was shouted out, who was in the audience. Miereanu asks about the voice acting sessions. Conroy explains that the voices are recorded before anything and WB places them all in the same booth at the same time, discussing the relationship and synergy. Conroy specifically mentions Hamill and how their relationship is more special and trusting, almost like brothers, and praising him for always giving so much as an actor for other actors to feed off of. He explains that, unfortunately, Hamill was not present at recording because of his involvement with Star Wars, but he still trusted Hamill to provide for them. He mentions that Hamill went to places he never expected. Miereanu points out the irony that Hamill was involved in a movie in which he said nothing. Strong reiterates how well their relationship has been established, but Hamill still managed to surprise her. 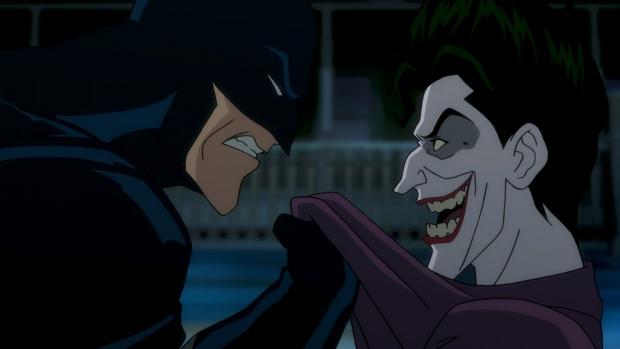 James Tucker was mentioned for storyboarding the Joker’s song, “I Go Looney.” Timm explains how they initially forgot about the song in the book. Timm had to call a small conference with the composers to determine how the song would sound. Timm wasn’t sure how they wanted the song to sound, but formulated a blueprint: “We knew it had to be kind of odd, but also kind of fun. Weirdly enough, because the Joker doesn’t think he’s being odd, he thinks he’s just having a great time.” According to Timm, when Hamill heard the song, he was taken aback, initially believing the song was supposed to be dark, resulting in something more so “bouncy and fun.” Timm admits that he only trusted one person to choreograph the song, so he reached out to James Tucker to storyboard it. Miereanu mentions that a behind the scenes feature about the song can be seen at the Fathom Events screening and on the Blu-ray.

To close the panel, Miereanu inquires about the ambiguous ending to the movie. Azzarello quips that “it’s none of your damn business!” before Timm launches into an explanation. In one of their first meetings, the table was asked about what they believe happened at the end. Most of everybody seemed to have a different answer. Timm had to muse about how they could go about it to satisfy everybody who had different opinions on the ending. He explains that it wasn’t until about 2 years later, at a party, when Azzarello pulled Timm away to explain his ending, to which Timm explained that it was “perfect.”

The movie will appear to the masses tonight, so keep some of these thoughts in mind when you view it tonight or tomorrow night. Be sure to reach out to us to let us know what you think of the movie. 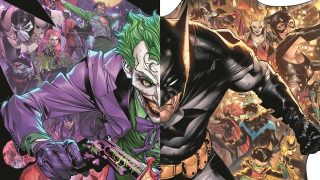