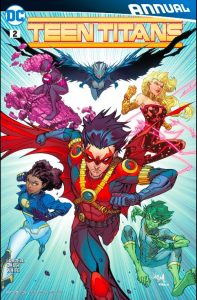 Scott Lobdell tackles Teen Titans Annual #2. The story entitled, “Last Dance, Last Chance…for Death” is a quintessential tale for this iteration of the Titans team. Readers are given opportunity to see each of the characters’ distinct personalities and qualities in this issue. And, they are all well handled.

The story opens with the Titans enjoying a rare evening out. The team lets its collective hair down at a downtown night club; all except for Raven and Beast Boy, who decide to hang in the alley outside the club. We see Cassie and Miguel owning the dance floor, and an awkward Tim Drake convinced to dance by his teammates. In plain civilian clothes we see these characters as they are – their personalities and ticks, struggles and insecurities. I found it refreshing and fun to read.

Miguel finds a partner on the dance floor and learns of a designer drug making the rounds at the club that evening. Soon, the party erupts as the pills change their takers into raging beasts. The story connects storylines from Teen Titans #15 and other past issues and blend them beautifully here.

The art in the issue is incredibly well rendered. The lines are crisp and clear. The colors are excellent and frame the scenes well. In the nightclub, pinks and reds highlight the fun of the evening. Elsewhere, blues and greens set the scene. This issue features interesting use of panel sizing and shapes, along with big splash pages. Another well-received feature of the issue artistically was its use of white space. This seems to be a less frequently used device, and a welcomed sight in Teen Titans Annual #2.

One of the most enjoyable elements of Teen Titans is its dialogue. One of my favorite panels saw Miguel reflecting on Raven’s tactics to keep party-goers safe. He says, “It’s times like these I see very clearly why some people feel we’re more problem than solution.” This sort of self reflection lends credibility to the overarching storyline running throughout the past few issues of Teen Titans, which features the team on the run from the authorities. The Titans are young and energetic, prone to mistakes and rash decisions, but they’re aware. 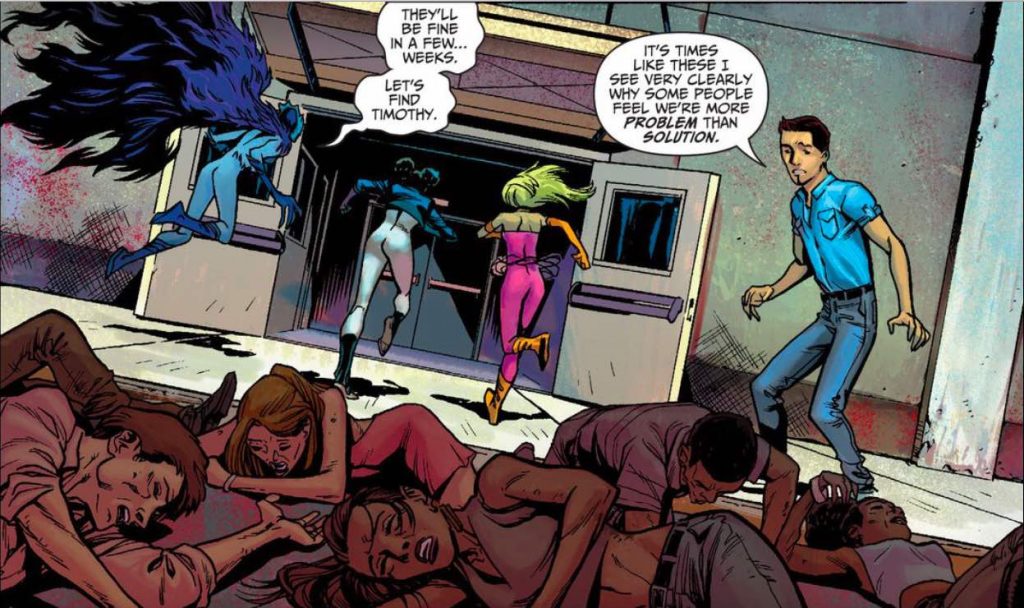 Another favorite features the Batman-like reflexes of Red Robin. He aids Beast Boy in taking down a villain and quickly finishes the job without Beast Boy noticing. Nothing like a no-look Batarang to show Tim’s brilliance. 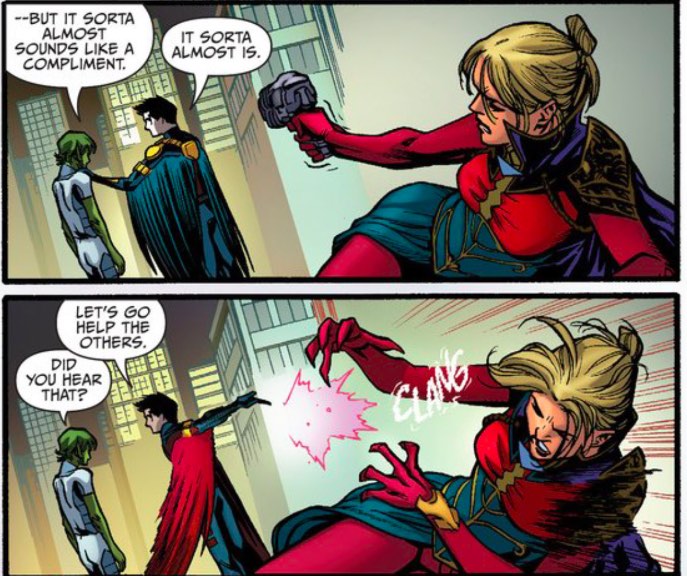 The issue ends with Red Robin taking the attack personally, regretting his decision to allow the team to cut loose and have fun at the club. The final panel ties in with his current predicament in the regularly scheduled issues of Teen Titans. Tim is faced with a decision and, perhaps, the ending of Teen Titans Annual #2 gives readers a glimpse into Tim’s perspective on his impending decision.

I really enjoyed this issue. It’s complete as a contained story within an issue. At the same time, it ties past issues together for a big reveal. The writing is good, the art is crisp. The issue seems to move forward or at least add flesh to current storylines. Overall, I was pleasantly surprised by this issue.