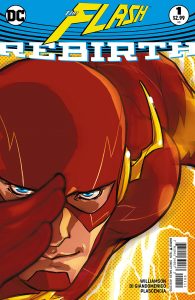 Geoff Johns recently spoke of how incoming Flash writer Joshua Williamson is a huge fan of the Scarlet Speedster and, after one read of The Flash: Rebirth #1, I have no choice but to wholeheartedly agree. Williamson has a deep understanding of Barry Allen, his world, and his supporting characters and handles them all with such care. Dare I say it seems like he may be the best writer, other than Johns, to touch this icon in recent memory?

Artwork has been a key element of Flash titles, perhaps even more so than other comics. A penciler just has to get those sci-fi effects right. Carmine  Di Giandomenico not only hit a home run, but may define The Flash for the Rebirth era just as Francis Manapul did for The New 52.

This one-shot kicks off with Barry investigating a crime scene highly reminiscent of his mother’s murder. In addition to him being afflicted with strange visions, we’re given a teaser of a new villain named Godspeed. I have to admit that is one awesome name for an evil speedster and it’s confusing as to why nobody has utilized it until now. He kind of looks like a brighter version of the TV series’ Zoom and I can’t help but hear the voice of Tony Todd when reading for him. While it would be cool to see him on the small screen, the show doesn’t need another speedster as a big bad. At least we have comic books.

The story actually intersects with the events of DC Universe: Rebirth #1 and feels like a spiritual followup. I feel anyone following the DCU as a whole should read this.

As you may have guessed, that overlapping has everything to do with the returning Wally West, who jogs Barry’s Pre-Flashpoint memories. This leads to the latter working alongside Batman on the case concerning whatever has been manipulating the DCU (hint: more Watchmen nods).

The Flash: Rebirth #1 is filled with Easter Eggs and fan service that will make the familiar feel at home, yet it’s entirely accessible for new readers. Although this spent a good deal of time tying into the DCU at large, it neatly set up the new ongoing series. Rest assured, it’s one astonishing read.

‘Batman: The Killing Joke’ Theatrical Release for One Night Only