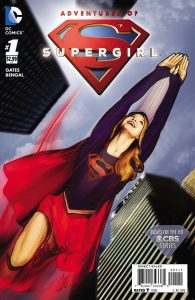 Finally, Adventures of Supergirl has come to print! This digital first comic “Based on the Hit CBS Series” (which has officially moved to The CW) can now be enjoyed by those who still love the feel of paper in their hands. As someone who prefers physical copies of everything, I admittedly enjoyed my reading experience much more in this format.

Writer Sterling Gates, one of the foremost scribes to touch the Girl of Steel in the past decade or so, perfectly captures the tone of the TV series as does artist Bengal, who brings a manga-like style to the action and emotion.

Those who are unfamiliar with Supergirl’s small screen exploits can easily get into this, as it is new reader friendly and wisely sums up Kara’s Kryptonian origins and journey to Earth in a succinct, highly effective manner. We even gain some insight into her teen years on this planet.

What’s cool about this issue is that the threat is that of Rampage, a villain unseen on the TV series itself. Not only does that provide a fresh experience, it drives home the central theme of sisterly love that is not only present between Kara and Alex, but also between Rampage and her deceased sister. Gates does a fine job of humanizing a villain that we would otherwise see as a one-dimensional brute.

I would not only recommend this to viewers of the show – and Supergirl fans in general – but also to those who enjoyed the Smallville Season 11 comics. Believe me, I’m not just saying that because the mighty Cat Staggs provides some seriously amazing cover art. It just has this certain feel to it that I can’t quite explain.

As I said, print is my preferred way of reading. If you too are in the same boat, you can look forward to more issues hitting stands over the course of the next few months. The fact that the show is freshly renewed will hopefully boost interest in the comic book, which does deserve all of the attention it can get.