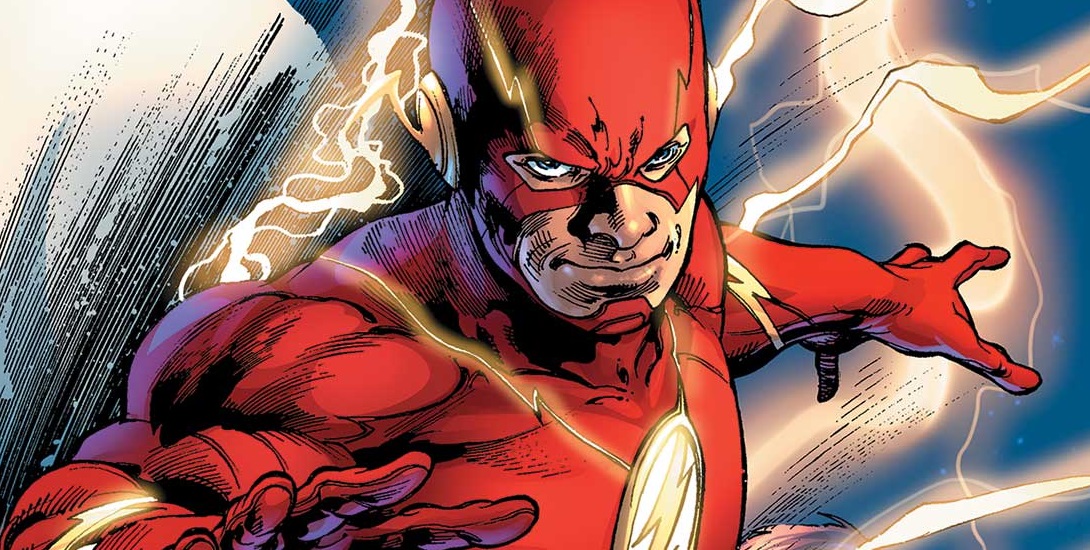 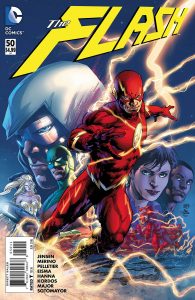 As you are no doubt aware, the enduring titles of The New 52 era recently hit the milestone of reaching fifty issues. Most shipped in March, with a few hitting stands in April. Oddly enough, The Flash is one of those that happens to be late to the party. Despite its tardiness, many readers will likely get a kick out of it.

I was grabbed by the opening page, which kind of reminded me of a cover for something out of the Silver Age. It sees Flash apprehended by the Rogues – at the bidding of Central City Police Department, mind you – and features Captain Cold saying, “Flash… you’re under arrest!” Cool stuff.

There’s also a mysterious villain lurking about. He’s draped in shadow and seems to be a “big picture” type of guy, a puppetmaster. Calm and collected, he comes off as genuinely more evil than the Rogues, who have somewhat of a code. But more on him in a moment.

After Flash gets the usual “you’re a menace” shtick from CCPD, extreme circumstances lead to his escape. Overload, well, overloads Iron Heights Prison’s electrical grid, causing most inmates to flee their cells and it’s up to the Scarlet Speedster to clean up the mess. Artists Jesus Merino and Paul Pelletier render some truly spectacular scenes in the process.

The big reveal of the villain in question does come on the final page of the main story, which you may eventually see coming. Personally, I think it’s cool to see this villain crossover from his usual stomping grounds to take on The Flash. I’m looking forward to seeing these two pit wits.

A pretty fun backup story featuring a Wally West who is coming to grips with his powers is also included. Fans of the TV series should take notice.

With this oversized issue of The Flash, Van Jensen delivers the scope of what you would expect from anniversary issue. I just wish it would have been made more apparent as to why Flash was arrested, aside from being a supposed menace to society. Those, like myself, who missed the previous two issues may feel a little lost.