Review: Superman: The Coming of the Supermen #2 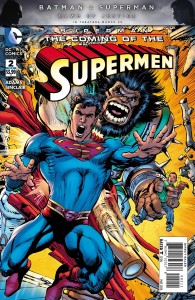 The second issue of Superman: The Coming of the Superman retains that 1970-80’s feel, both visually and in spirit, that made the first a thrill to read. Neal Adams delivers, as can usually be expected, when it comes to the art side of things, but the dialogue could have benefited from another assist by Tony Bedard; it gets pretty bad at times.

Despite its flaws, it is apparent that Adams is having a lot of fun with this mini-series and certainly doesn’t skimp on the action. Expect much fisticuffs between Kryptonians and Apokoliptians, as the cover art suggests.

We do get to learn a bit more about the new Supermen and who they were before arriving on Earth. It’s always nice to see Superman interact with his own kind, especially when they aren’t trying to kill him. The Kandorians may have can-do attitude, but their amateurish efforts prove that not every Kryptonian can put an “S” on their chest and be Superman.

The Superman/Lex Luthor feud is ever present, although it is not executed as well as seen in another book that shipped this week, Superman: American Alien. The emotion is there, but again, the dialogue provides more speed bumps.

While the story is moved along at a breakneck speed, several concepts Adams has spoken of in interviews have yet to be introduced. I would rather not spoil them and will discuss them when they are eventually incorporated. I also wanted to see more of Darkseid and learn more of his lineage, but I guess that will be explored in the future. It seems the many threads are already starting to connect, although the cliffhanger raises even more questions. Say what you want about this series, but the hooks are enough to keep me coming back for more.

Neal Adamssuperman: the coming of the supermen
Share
0
FacebookTwitterPinterestEmail