The latest DC animated film, Batman: Bad Blood, features a number of new characters to the ever expanding Bat-Family including the animated debuts of both Batwing and Batwoman. Not only that,  Bad Blood also introduces us to one of the most popular Bat characters in it’s final moments – Barbara Gordon aka Batgirl!

Sporting her latest comic book outfit which currently appears in Batgirl written by Cameron Stewart and drawn by Babs Tarr, this last minute appearance will no doubt lead to a bigger role for Barbara in future DC animated movies. 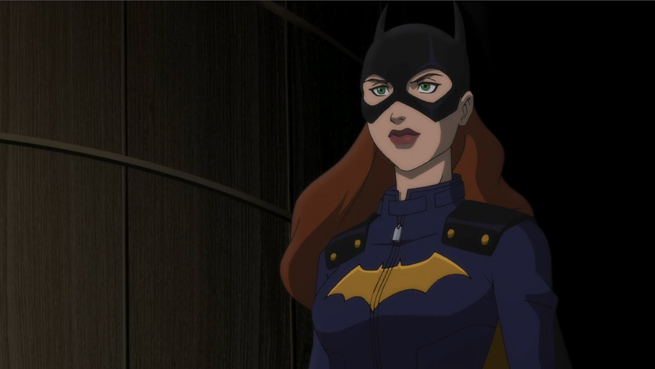 As reported by Comicbookresources.com, character designer Phil Bourassa discussed why he chose to go with the current iteration of Batgirl at the New York City premiere:

“I think [the redesign] had just come out in the comics at the time and, you know, I’m kinda old school so I wanted to do the classic look on her,” said Bourassa. “But it made more sense for the story because that looks like — basically she’s just starting to emulate Batman at this point. This is her debut. One of the cool things about that costume is that it looks like something you could actually make. It looks very practical. It doesn’t look too superhero-y, if that makes sense. Somebody could totally cosplay that easily, just a leather jacket boots and stuff like that.”

I, for one, have seen a few cosplayers do this version of Batgirl at a few conventions and they have all been pretty spot on. Bad Blood director Jay Oliva also revealed that the original title for the movie was Bat-Family and that he knew he had to have Batgirl in the film somehow if the movie was to be focused on Batman’s core characters:

“Originally this was called ‘Bat-Family’ and [producer] James [Tucker] and I were talking like, ‘We should really put Barbara in at the end,'” said Oliva. “When we thought about putting Batgirl in it, we were again discussing costumes and stuff, but like Phil said, the idea is that Batgirl — this is her emergence. She’s inspired by what she saw with both Batwoman and Batman and the Bat-Family, and now she comes in. So this is actually the basis of her if she does appear in future films, we can build off of her. This is her 1.0 costume, just like Batwing’s costume is the 1.0 of the ‘Batman Beyond’ costume, which it will eventually become.”

Batman: Bad Blood is available digitally now and will be released on DVD and Blu-Ray on February 2nd.