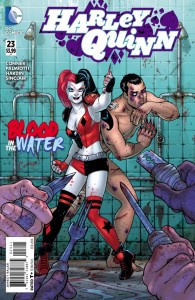 Faithful DKN readers may or may not be tired of my singing the praises of Harley Quinn lately. Once again, I’ll credit Amanda Conner and Jimmy Palmiotti for making me fall in love with the character. I feel that they have developed her more than anyone else has since her creation and carved a nice little niche, her own corner of the DC Universe.

This issue is chock full of the dynamite dialogue and irreverent humor that we’ve come to expect from the series. Not only that, Chad Hardin’s artwork looks especially spectacular this month. I really can’t give him enough credit.

As for the story itself, it joins Harley as she’s off to rescue Sy Borgman from the clutches of Zena Bendemova, a name that Ian Fleming probably wished he had thought of. This thread is resolved surprisingly quickly and felt a bit rushed, yet still enjoyable. I just think some may have preferred to have this wrapped up in one issue before moving on to something else.

The rest of the book sees Harley attempt to break Mason Macabre out of prison, just as the cover art alludes to. Despite her violent efforts, things don’t go her way. Fortunately, she has an ace up her sleeve, but again is foiled when a twist of fate aims to send her back to a place that she and all of us are very familiar with.

It’s highly possible you can guess what the cliffhanger is, but you know that I prefer to not spoil final pages for the most part. I’ll just say that it will likely make for an exciting next few months for this title.

Check Out These New Variant Covers for The Dark Knight III: The Master Race #2