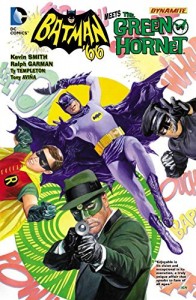 Long before the Justice League, Avengers, and Teen Titans teamed up in live action or animation, the biggest superhero crossover of yesteryear occurred on prime time television in the late 1960’s when the Green Hornet and Kato visited Batman for a two episode arc. It may not sound like much, but ask anyone who was around to witness it and they’ll tell you that it indeed was a VERY big deal.

Luckily, longtime Batfans Kevin Smith and Ralph Garman have penned a comic book sequel that absolutely nails the tone of the show and lives up to it in every way. The dialog is so spot on that you will never have to strain your imagination to hear the voices of Adam West, Burt Ward, Van Williams, and others whenever you read for Batman, Robin, and Green Hornet, respectively. You will even hear the voice of the show’s narrator! Some beautiful interior art is provided by Ty Templeton that manages to be cartoonish and photorealistic at once. Speaking of photorealism, cover art is provided by the legendary Alex Ross. How can you go wrong with this creative team? 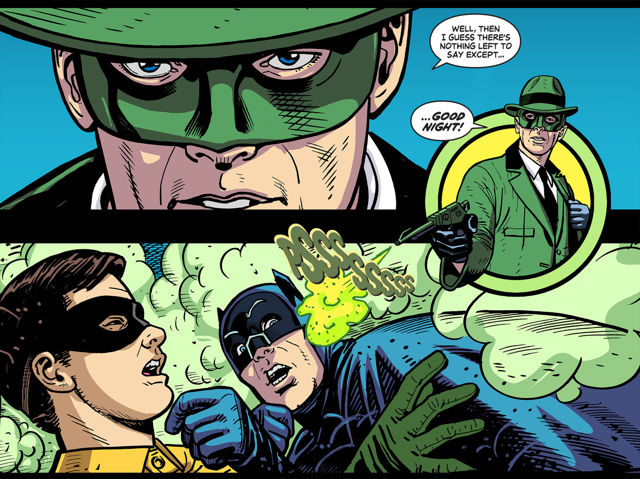 As I said, this book is a sequel to the TV crossover. It even retains the same villain, although it’s worth mentioning that Colonel Gumm has promoted himself to General Gumm. Smith and Garman have perfectly translated the series to the page, complete with some crazy cliffhangers (this was originally published as a digital first comic). And yes, the action is as delightfully absurd as the show you remember.

Hopefully this team will one day reunite to continue the show’s legacy or Kevin Smith gets his wish by having this adapted to an animated movie. I recommend this for all Adam West Batfans. Now that the TV series has finally seen a home video release, this book serves as the perfect companion. Score: 9/10