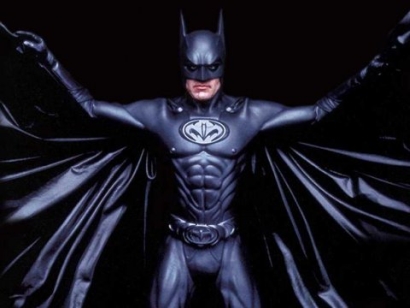 In an interview with Deadline, the Academy Award winning actor revealed that a photo of himself as Batman is

“prominently displayed on his office wall, as a cautionary reminder of what can happen when you make movies solely for commercial reasons.”

Batman and Robin (1997) cost about $125 million to make, but only reeled in $107 million at the box offices, proving that superhero films should not merely rely on big budgets, big names, big heros, and bad puns to attract fans.

He [Clooney] quickly realized that he needed to steer clear of flashy movies that are “wastes of money.”

Luckily, Chris Nolan and Company revitalized the Bat-film franchise with their memorable trilogy, which forwent campy humor and lighthearted tone, and embraced a character-driven, more “serious” direction, with Batman Begins as a journey-type of film, The Dark Knight as a crime drama affair, and The Dark Knight Rises as a sort of disaster-film.

Regarding his casting in the upcoming Batman vs. Superman, perhaps Ben Affleck has steered clear of the “flashy movies” that waste money; this is to say that we can safely assume that the film won’t be another Batman and Robin, and that, hopefully, the casting was appropriate.  Cross fingers!