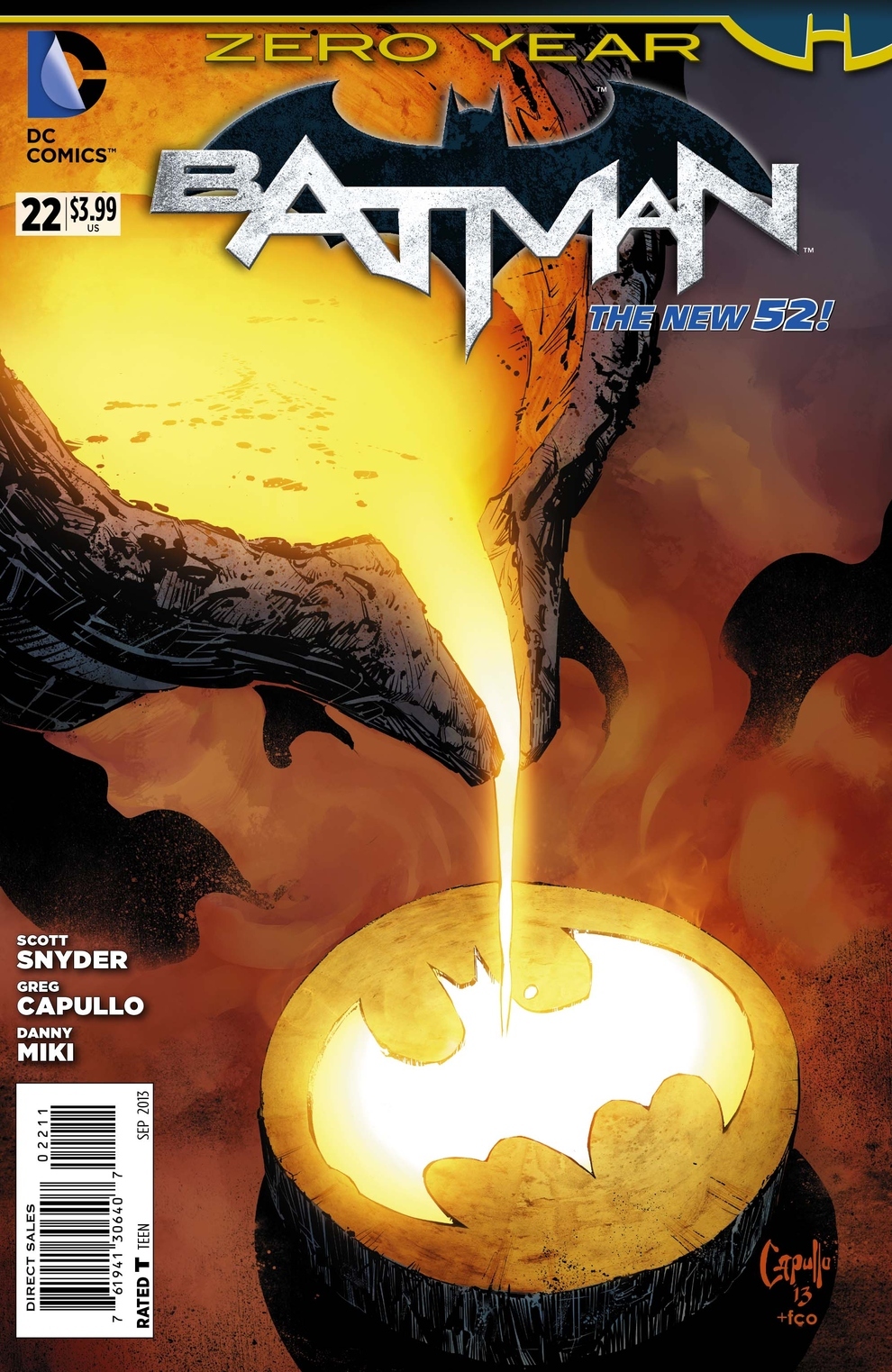 Batman #22 continues Bruce’s origin for The New 52, as he tries to take down The Red Hood Gang, but has he begun a war he cannot win?

Secret City: Part Two jumps right into the action with a thrilling, sky-faring heist, in which, The Red Hood Gang is looking to steal some weapons.  Here we once again find Bruce deep under cover, and in over his head.  He narrowly makes it out, only to find things crumbling around him.  He is confronted by a concerned Alfred, who wishes Bruce would approach his war on crime in a different manner.  The ensuing argument drives a rift between them and ends in a painful separation.  As he seeks to gain some ground and perhaps some allies, Bruce finds himself set up by his uncle, through the machinations of Edward Nygma.

“EVERYTHING means something, or should, I think – – don’t you?”  Greg Capullo’s art takes the center stage this issue.  His work has always been beautiful, clean, and consistent, but his panel set up really makes this one special.  Two separate pages of this issue really stand out.  One so cleverly demonstrates the intricacies of what appears to be a simple conversation, while the other stands out as a soon-to-be iconic image of Bruce’s origin.  Capullo doesn’t stop there, however.  Moments of disorientation are displayed with odd panels, solitude is accentuated by a lack of frame, and even characterization is developed with his panel work.  The subtlety of having a character who knows no bounds literally stepping out of a frame is simply beautiful brilliance.

“We might just be two of a kind, kid.”  Scott Snyder knows his Batman lore, and clearly he’s gotten very comfortable showing it.  Batman #22  is filled with nods, winks, and full on fan service, the likes of which will make you giddy.  The issue opens with blimps, a call back to The Animated Series, while the pacing and mid-action timing feels like a quiet tribute to movie serials from around the time the Batman character was first created.  Then there’s the whole ‘is he?’ aura of mystery to Red Hood One.  Snyder lays it on just thick enough to make you feel like it is very much the future ‘Clown Prince of Crime,’ but leaves enough room to have a potential twist there.

“Not crazy enough, Bruce.  That is the problem, Maxwell.”  The back up story in this issue was a bit lackluster in my opinion.  While it serves as a nice reference to an off-hand comment made earlier in the main story (though a bit more overtly referential than Batman #21‘s back up) the story ultimately felt unnecessary.

“For once in your life, don’t be polite. Just say it, DAMMIT.”  Between Snyder’s writing, and Capullo’s amazing art work, the only bad thing about this issue is that it is over too soon.

Batman  #22  is more great work from two of DC’s finest.  Snyder is a machine, continuously building upon Batman’s history without disturbing it, all the while adding pieces that feel like they’ve always belonged.  Capullo, too, is unstoppable, as his work not only pushes Snyder’s story telling to the next level, but also truly stands on its own.  With the promise of issue #23  as “The End of Bruce Wayne” one can’t help but wonder how much more surprises this pair has in store for us.