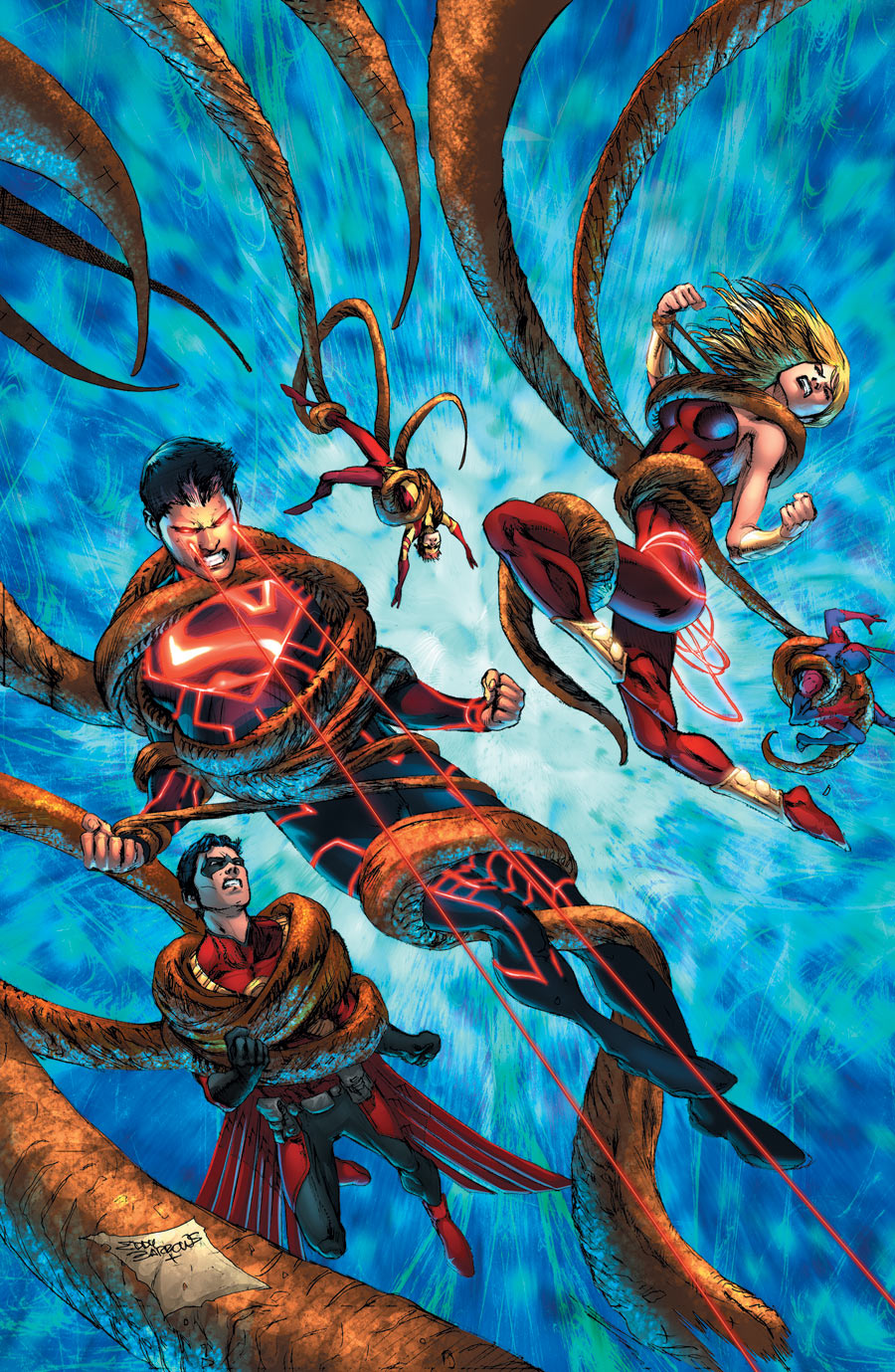 Times are tough for anyone who was a former Boy Wonder for the Dark Knight. With the fallout and betrayal of trust from Batman in Death of The Family, and the death of one their own, Damian Wayne, they’re all going through the wringer. None more so then perhaps Tim Drake, Red Robin. Tim is taking that death especially hard, oddly enough. To say Tim and Damian did not get along would be an understatement. They always fought, they always argued, and there was always a jealousy between the two since Damian first appeared, but at the end of the day, Tim and Damian were “family”. Some earlier trust issues aside, they did work together, and Damian is exactly the kind of person that Tim is fighting for in Teen Titans. Children who are involved in this masked crusade of vigilantism, and putting kids in danger. At the beginning of Teen Titans #18, Tim broke down even though his own imaginary Damian was telling him that it made no sense because they weren’t close in life.

Tim mourns the loss of Damian, if not for the fact that Damian was part of their “family”, but because Damian represents everything wrong with having sidekicks. A young child out in the field, someone who can and will die if left alone. Tim feels the Titans are the only ones who can save these kids, because they’re kids themselves, because the adults are far too focused on other tasks at hand. On that matter, Scott Lobdell talks about reintroducing a classic Titan villain, Trigon and the redoubled efforts of the Titans in the wake of such a prolific sidekick’s death.

…While I think Trigon has certainly left his imprint on the DC Universe on more than one occasion since his original debut — I confess to remaining a little curious about his master plan. I get that he wants to rule over Earth, but was never sure what was preventing him from doing so over the centuries (if not longer).

So, issue #20 really focuses on Trigon, who he is, what he wants and how he plans on getting it — exactly why is Raven so important to his plans and why he has apparently been involving himself in the lives of the Teen Titans at all.

We’re going to see a very long lived Trigon who is playing the “long game.” Everything he does he does for a very specific reason: he is a planner, a builder. Sometimes he uses seduction (like with Raven’s mom and Psimon) and other times he uses the sheer horror of the promise of Eternal Damnation. The guy has range.

On the matter of Tim Drake however, Lobdell spoke about how essential Red Robin is not only to the team in-story, but the focus of the book. He takes some time to cover why Tim has been acting oddly, perhaps not making the smartest decisions, and that he’s been put through the wringer hard these last few months. His attitude from the fallout of these events will have some effect on the team dynamics in the issues to come

It is going to have a profound effect in very unexpected ways. I know some people hate seeing their characters put through an emotional wringer — but as a fan I’ve always loved it. I love it when a character makes the wrong choice (or escalating series of choices) and has to deal with the fall out of not so much being a hero, as much as being a human being who makes mistakes.

Even when you are on your own, the mistakes you make affect others — imagine what happens when you are the leader of a fledgling young team of super heroes. Kids who, for better or for worse, hang on your every word. Tim brought this team together — has held it together — through sheer force of will.

As Trigon will tell you, you want to kill your enemy, you take its heart. Tim Drake is the heart of the Teen Titans.

Now whenever someone mention Trigon, his daughter and veteran Teen Titan Raven is never too far from anyone’s lips. Raven is popular, and shows up a lot, from anything like the Teen Titans cartoon, or even Injustice: Gods Among Us. Raven was reintroduced to the DCnU in Phantom Stranger #1, and resurfaced in Teen Titans #17. With the return of such a prolific Titan character, Lobdell talks about her and her future in the title.

Actually, I am pretty sure she cameoed in “Teen Titans” #1, didn’t she? Hmmm.

Since being tasked with creating a “Teen Titans” book where we see the characters for the first time in the New 52 (that is we see Tim meeting Cassie, Bart, Kon, etc.) I’ve felt it was important to create new continuities for the characters that weren’t just echoes of the old continuity. Some people have loved it, others have — um, loved it less!

When handed a character like Raven, it is just so exciting because she’s just so darn conflicted. Imagine if Satan’s daughter showed up at your prom. Even if she insisted she had the best of intentions, she’s, you know — still Satan’s daughter. If you weren’t nervous, if you weren’t skeptical, there would be something very wrong with you!

I’ve always loved Raven as a character, but over the years I felt she’s been depicted as a bit of a victim: very “I can’t have emotions because I might accidentally cause the end of all things.” I’d rather see a Raven who is in control of herself and those around her — she has a ferocious appetite for emotional connection, sexual energy,power — and she is not one to be denied. She’s Raven — it should be scary to be around her even at her happiest and most earnest.

Raven’s not the only character who’s being reintroduced into the DCnU, but the controversial figure Dr. Light, who had a pretty decent sized impact post Infinite Crisis all the way until Flashpoint. However, the plans for Dr. Light are similar for to what Lobdell did with H’el for Superman during the H’el On Earth crossover for the Superman related titles. CBR asked what they could take away from the new Dr.Light that’ll be appearing in the next arc of Teen Titans.

Just that that’s not Dr. Light! Much like when I set out to recreate Bizarro and Editorial was like “Awesome character! But he’s not Bizarro! He’s… H’El!” I was asked to come up with a Dr. Light story that zigged when it should have zagged.

So now we have two brothers, The Light and the Way. One is a brilliant and crippled man who needs the light generated by young metas in order to live. The other is a living avatar who only exists to serve the whims of his sick brother. So — yeah, you can see where they have very little to do with Dr. Light.

With appearing in the Death Of The Family, and fighting the Suicide Squad, the Teen Titans seem to have a larger effect on the DCnU at large, Lobdell teased at what the Teen Titans will be affecting next in the issues to come.

Well — I want to say they are going to find themselves in the 31st Century soon, which most people will assume means they are going to be running into the Legion of Super Heroes — but I am actually eager to explore the most remote edges of the Universe — a place where people ask “Legion of what–?” I want to see the galactic underbelly, so stay tuned!

Red Robin and his Teen Titans will be part of the larger DCnU in the issues to come. Let’s see where they go from here. 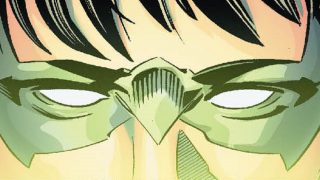 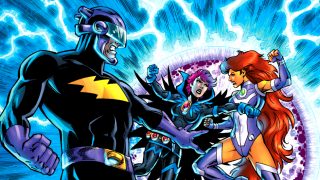