Hey guys, great news.  Batman: Earth One is coming out July 4 . If your like me, then you’ll be looking forward to seeing how writer Geoff Johns takes a different twist on Bruce Wayne becoming Batman .  Artists Gary Frank and Jon Sibal and their approach to the overall look . CBR was talking to Gary Frank about the upcoming  Shazam, and also dabbed a little about the upcoming  Batman: Earth One  an what you can expect .

The style of the book is very different but the nature of the collaboration is essentially the same. We talk often about where we want to take these characters and how we are going to get them there. Geoff starts with an idea of what kind of story he wants to tell and I try and throw in a few suggestions as to how we can get that across. We’ll talk about the best way to achieve a desired result but the overall vision and tone come from Geoff’s master plan.

When it comes to “Batman: Earth One” what should fans expect from the graphic novel — will it be similar in tone to J. Michael Straczynski’s “Superman: Earth One?”

I suppose so. The concept behind both books is the same. We talked about having a uniform look for the coloring, etc. but, in the end, we decided that the best approach was to do what we each felt was right for own story without too much reference to the other.

For the full story on this go to CBR 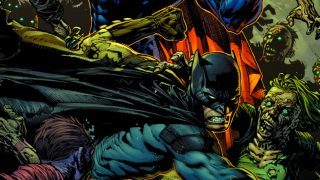