Review: Justice League Vs The Legion Of Super-Heroes #4 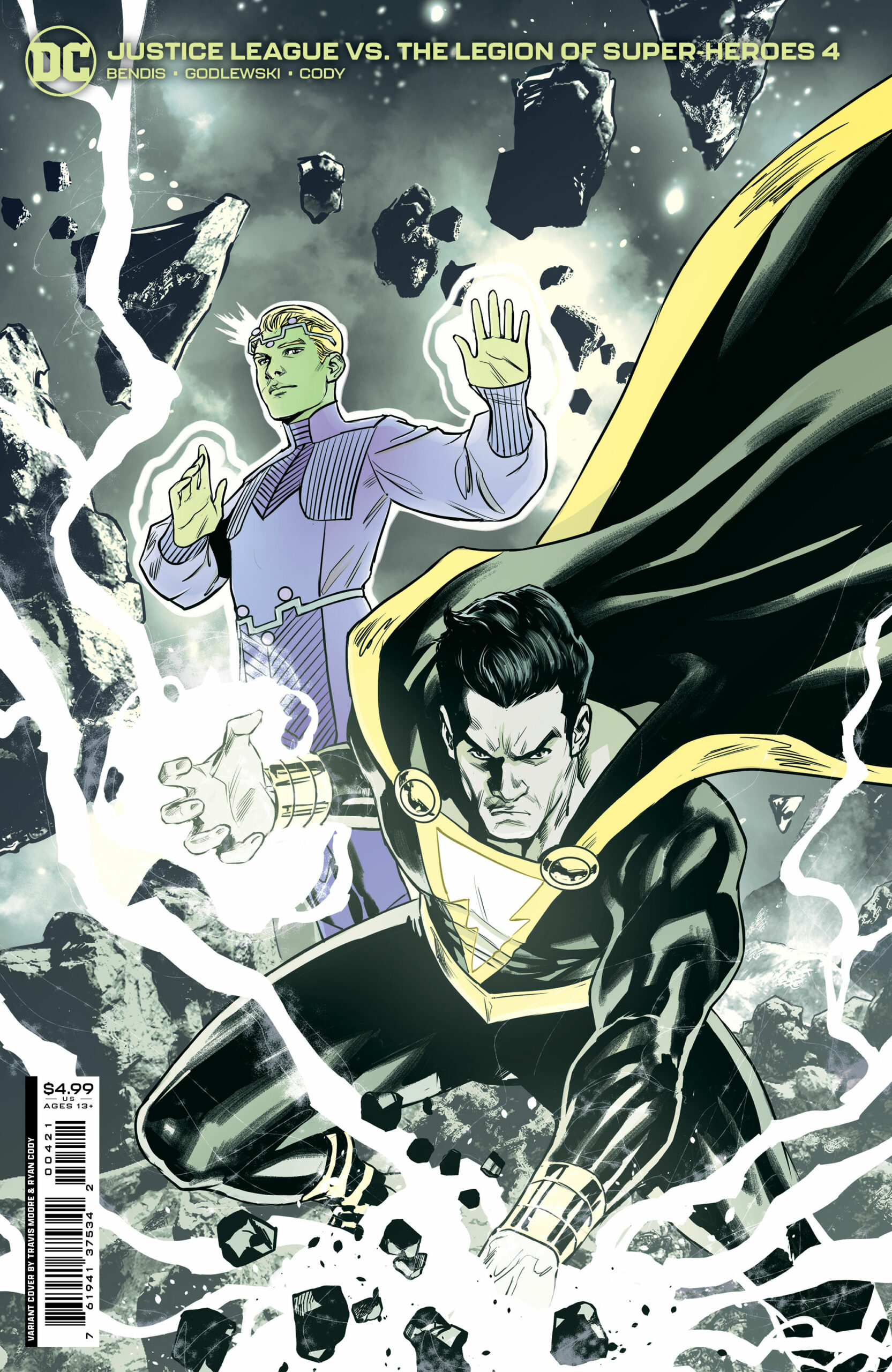 Review by Matthew B. Lloyd and Derek McNeil

Justice League Vs The Legion of Super-Heroes #4: Now it’s the Legion’s turn to get stuck in a time they don’t belong in, the 21st century. The greatest heroes of the future will get to see the reality of their heroes of the past.

All this is happening because the Great Darkness is coming, and even as the truth behind it’s about to be revealed, it may be too late to stop all from becoming nothing. It’s the heroes of two eras in ways you’ve never seen them before! 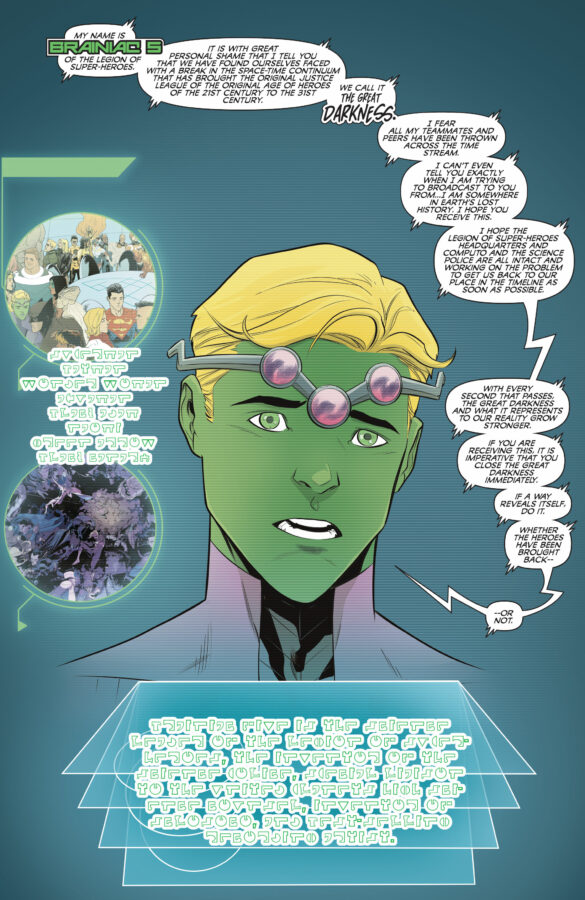 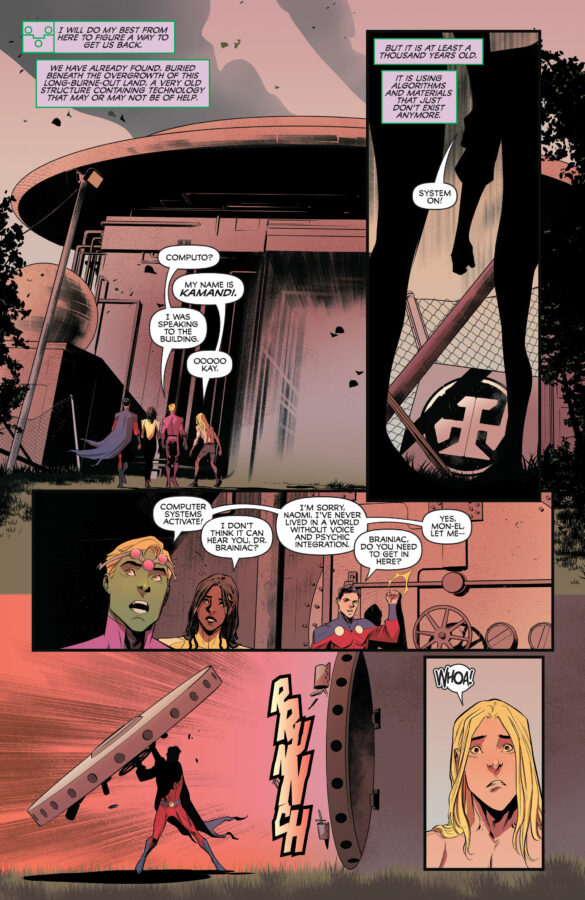 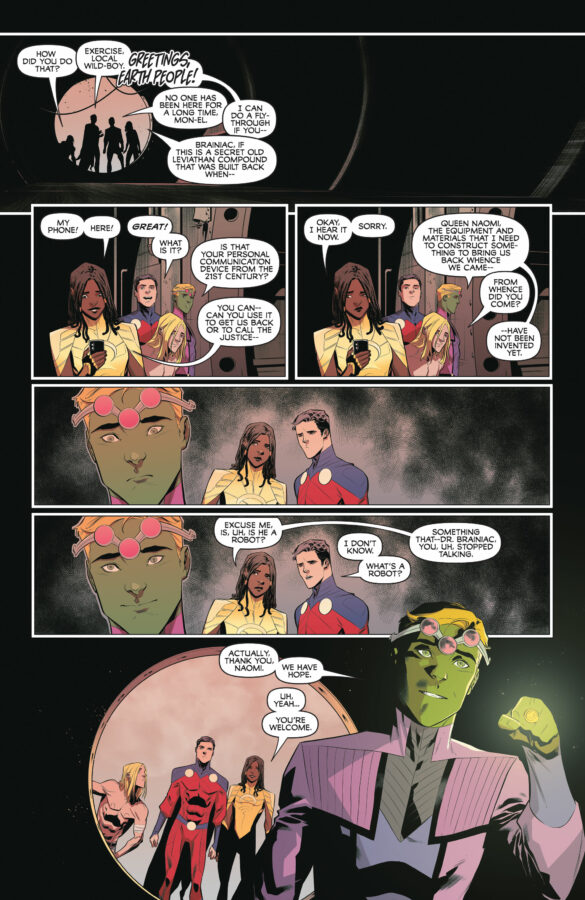 Justice League Vs The Legion of Super-Heroes #4

Matthew: Let’s be honest, there aren’t a lot of positives as we hit issue #4 of this series. Scott Godlewski continues to keep things interesting in the art department, but he’s not given a lot to work with in Bendis’ script, though there are a couple of interesting lines from Bendis that are worth mentioning.

When Brainiac 5 walks into the bunker he automatically attempts to connect to the computer with his voice only. Cleverly, Bendis has Brainy admit he’s only ever been in a world that has computers that are voice recognition enabled.  This feels like a genuine experience that someone from the future would have.

Derek: Yeah, Godlewski is basically carrying the book. Unfortunately, while a great story can sometimes save poor art, the reverse isn’t true. This series is great to look at, but it has little else to offer. 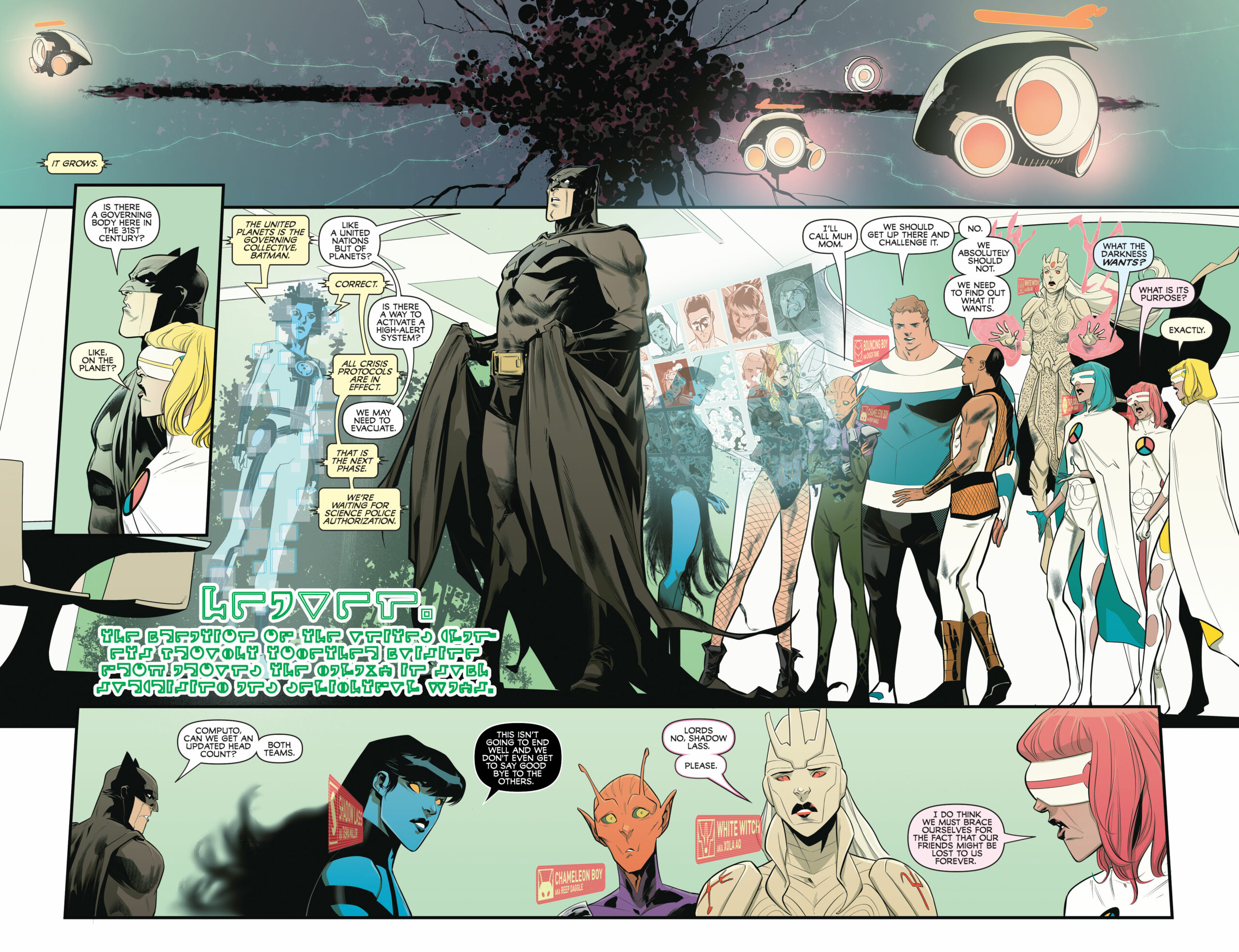 Matthew: In another part of the issue, the Gold Lantern who’s been thrown further into the past meets Alan Scott, the Golden Age Green Lantern.  It’s a neat moment, but way too short. Well… the idea is cool, but it’s not executed very well.

Derek: That pretty much describes Bendis’ writing in a nutshell. He comes up with some really good ideas, but rarely goes anywhere with them. When I saw Alan Scott, I thought this could lead to something interesting, but Alan does nothing to contribute to the story during his brief appearance.

Matthew: We’ve reached Justice League Vs The Legion of Super-Heroes #4 and I don’t think it’s a stretch to ask if anyone even cares about this series at this point and it doesn’t help that the it’s gone bi-monthly. However, it seems to be the overall pacing of the series that’s the biggest issue. Everything’s taking so long to develop that it’s hard to feel any sort of tension or drama with the events. The first issue was decent, but not much has happened since. It feels mostly like a set up for something else.

Derek: I know I’m finding it difficult to stay interested in this story. Justice League Vs The Legion of Super-Heroes #4 ends with the caption “To Be Continued…?” as if the series might not carry on past this point. I actually thought to myself “Why bother continuing it?”. It doesn’t really seem to be adding anything to the overall Great Darkness story being told in the Dark Crisis event. 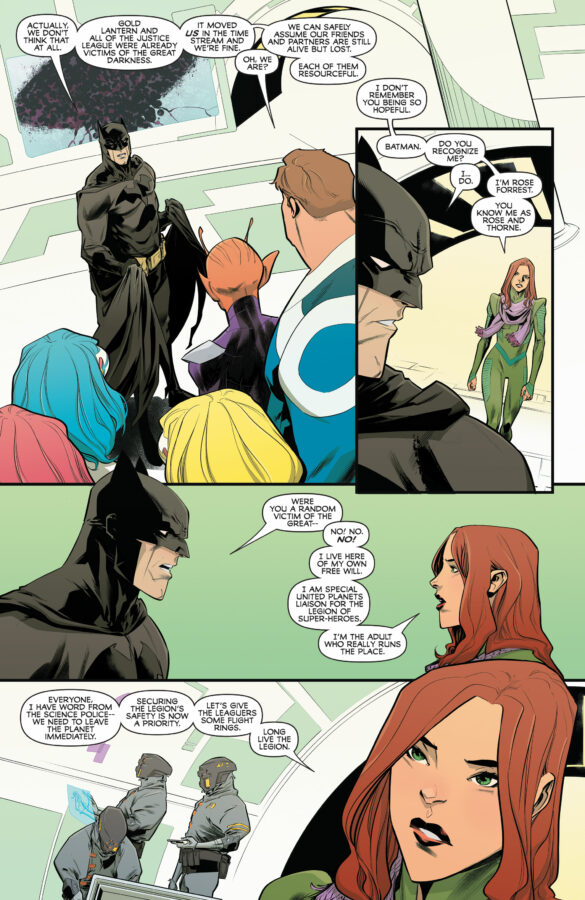 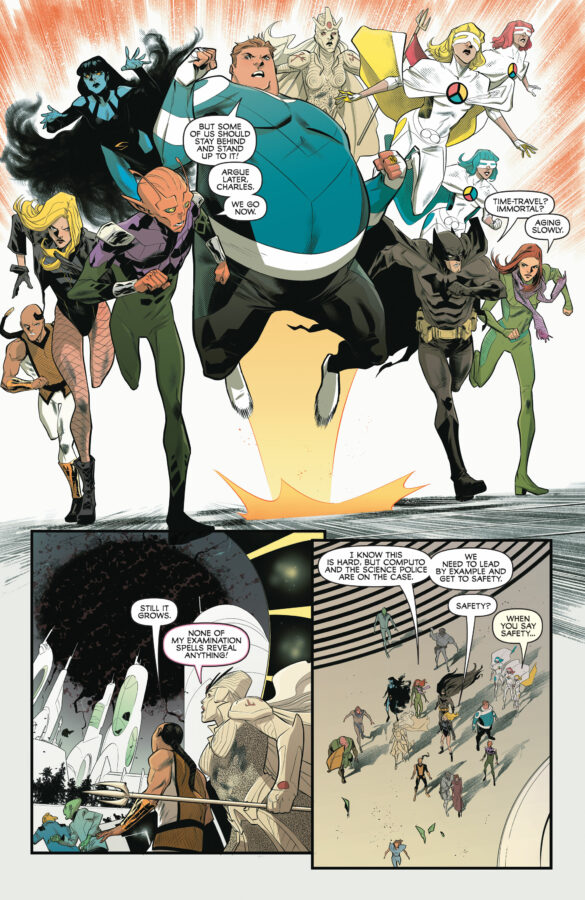 Matthew:  All the talk of the “great darkness” isn’t really paying off. For those readers who know what the Great Darkness really is, this story feels aimless.  Even within the confines of the book itself, there’s no real development of the darkness for a reveal with some sort of payoff.

Derek: What’s worse is, we already know how this all ends, thanks to the delays this series has encountered. In Justice League #75, Green Arrow states that the League has recently encountered the Great Darkness and defeated it – evidently referring to this series. We already know that the League will be back in their own time and at their proper ages by the end of this series. By the story’s end, the status quo will have come full circle. You could cut this piece of the overall Great Darkness story and it wouldn’t make a lick of difference.

Matthew: It’s hard to believe, but the dialogue seems to be getting worse too. There are moments that it’s all so confusing from a storytelling standpoint, as well as the characters’ conversations that just seem to be there because Bendis thinks he’s being clever. I don’t think he has any clue as to how Black Adam should speak. It’s more of a distraction than anything effective in any capacity.

Derek: Bendis has always been a little too impressed with how clever his dialogue is. Yes, occasionally he will come up with witty things for his characters to say, but more often than not, it’s just something inane. You’re absolutely right about him not having a good grasp on how the characters should talk, as there were multiple instances in the main Justice League title where he put words in Batman’s mouth that the Dark Knight would never utter. 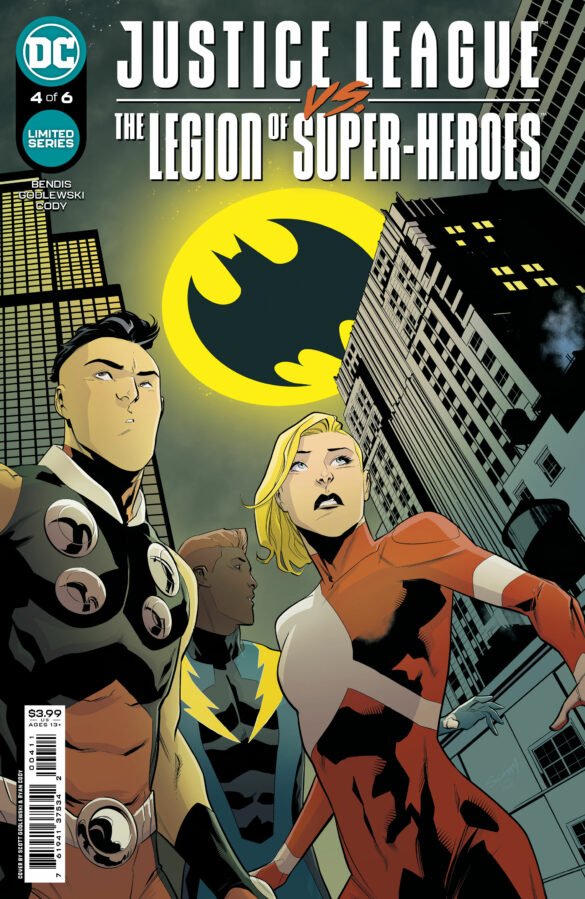 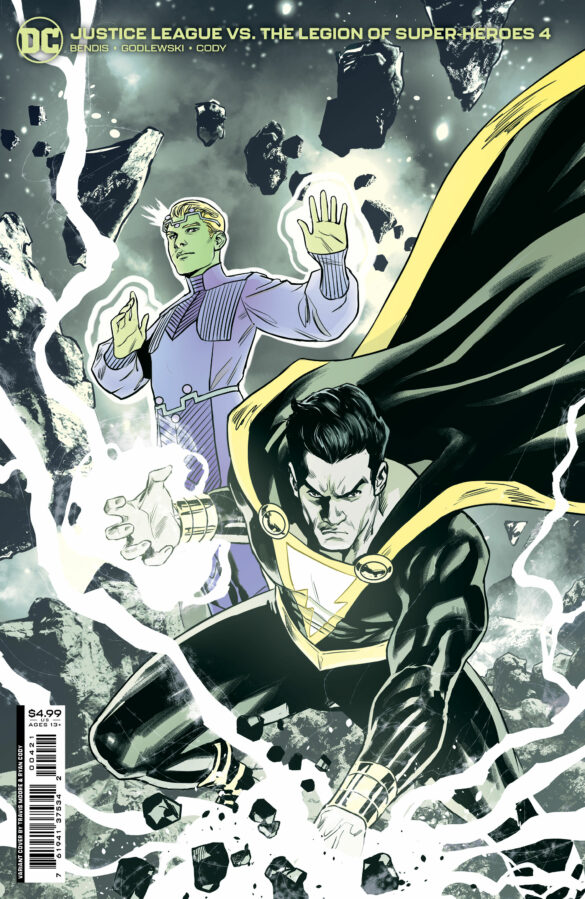 Matthew: It’s not worth following this series. There’s literally nothing of interest going on and there’s almost no chance anything of significance will happen. Coupled with the fact Bendis’ Legion is uninspired, it’s best to just put this away and hope we get a classic Legion reboot and let Bendis leave the DC Universe well enough alone.

Derek: I suspect that Joshua Williamson and the other plotters of Dark Crisis and Flashpoint Beyond arranged it so that this story would be ultimately separable and irrelevant to the overall Great Darkness story. It’s likely just meant to keep Bendis occupied so that he doesn’t mess up the overarching Dark Crisis crossover. While I’ve been enjoying their new “Great Darkness Saga” very much, readers could very easily skip it. In fact, they probably should.