“The Fall of the Titans” 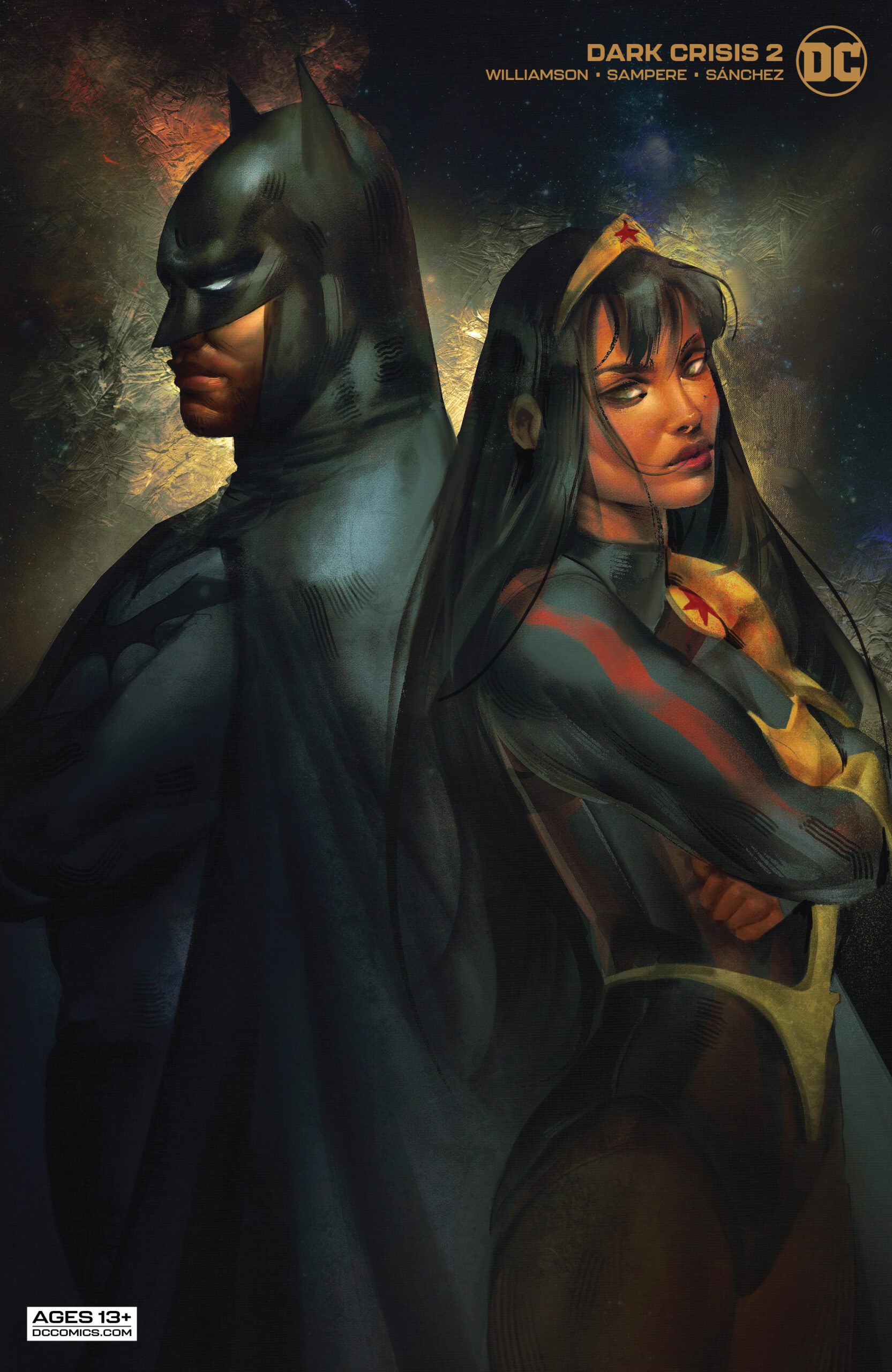 The blood of heroes stains the floors of Titans Academy, as Deathstroke declares war against the legacy heroes, in this week’s Dark Crisis #2.

Since his first appearance in The New Teen Titans #2, Deathstroke has been at odds with Dick Grayson and his team of heroes. After all these years, it appears that Slade Wilson has finally bested his foes. Having raised an army of supervillains, Deathstroke leads an assault against the Titans Academy, leaving many injured and some potentially dead. 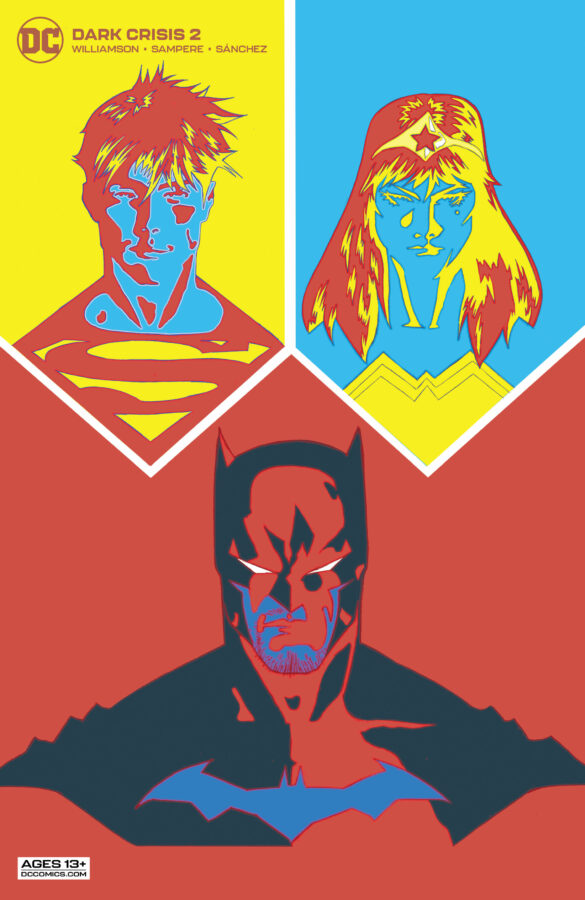 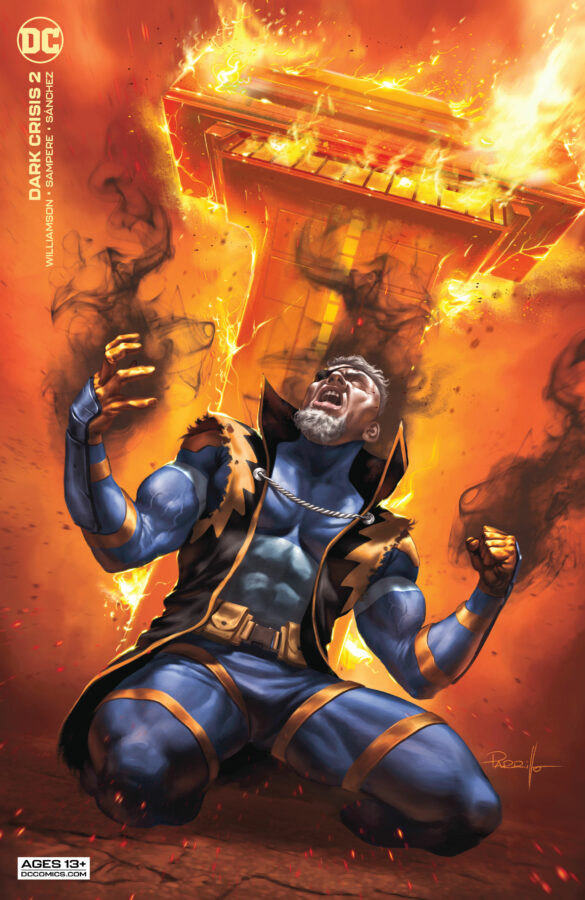 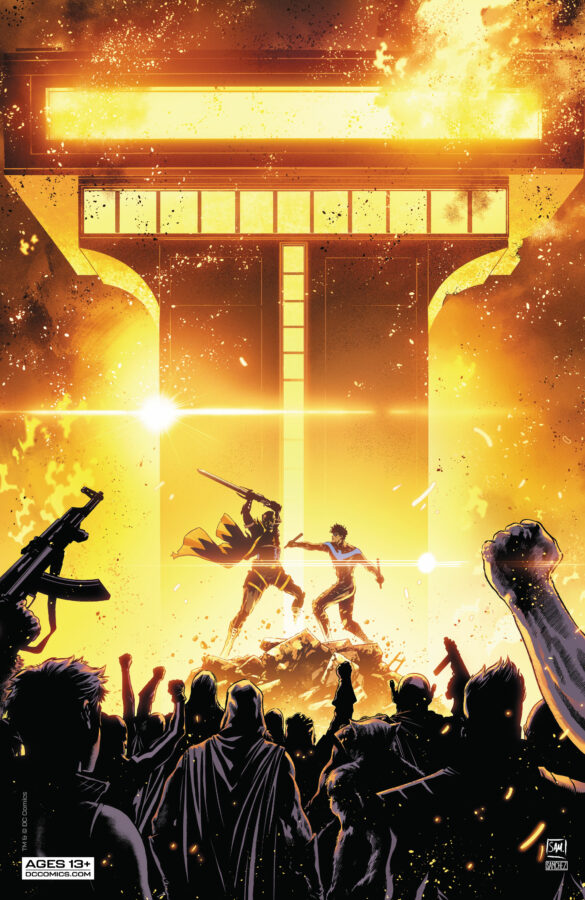 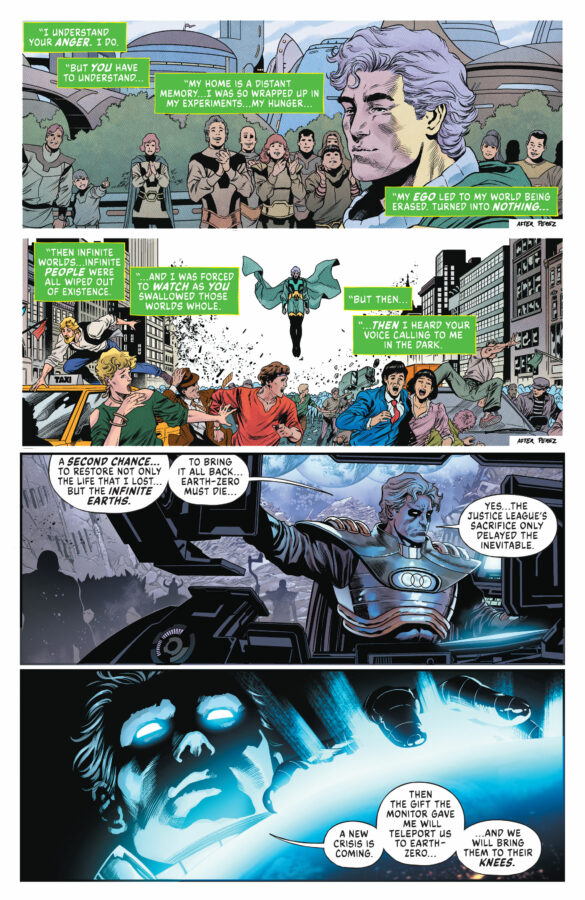 Joshua Williamson’s script is nothing short of operatic, as Nightwing and Deathstroke duke it out in an epic fight sequence. The gravity of this conflict is not lost, for it feels like this sequence was 42 years in the making. Deathstroke and Nightwing have a long history, and each blow that’s landed carries the weight of this longstanding conflict. This scene is by far the strongest of the issue.

While the Titans storyline is great, Williamson does little to develop other plot threads and characters – the big ones being Pariah and the Great Darkness. I’ll admit that I’m a little frustrated with Dark Crisis right now. We’re two issues into this event, and Williamson has made little headway in terms of overall progress. 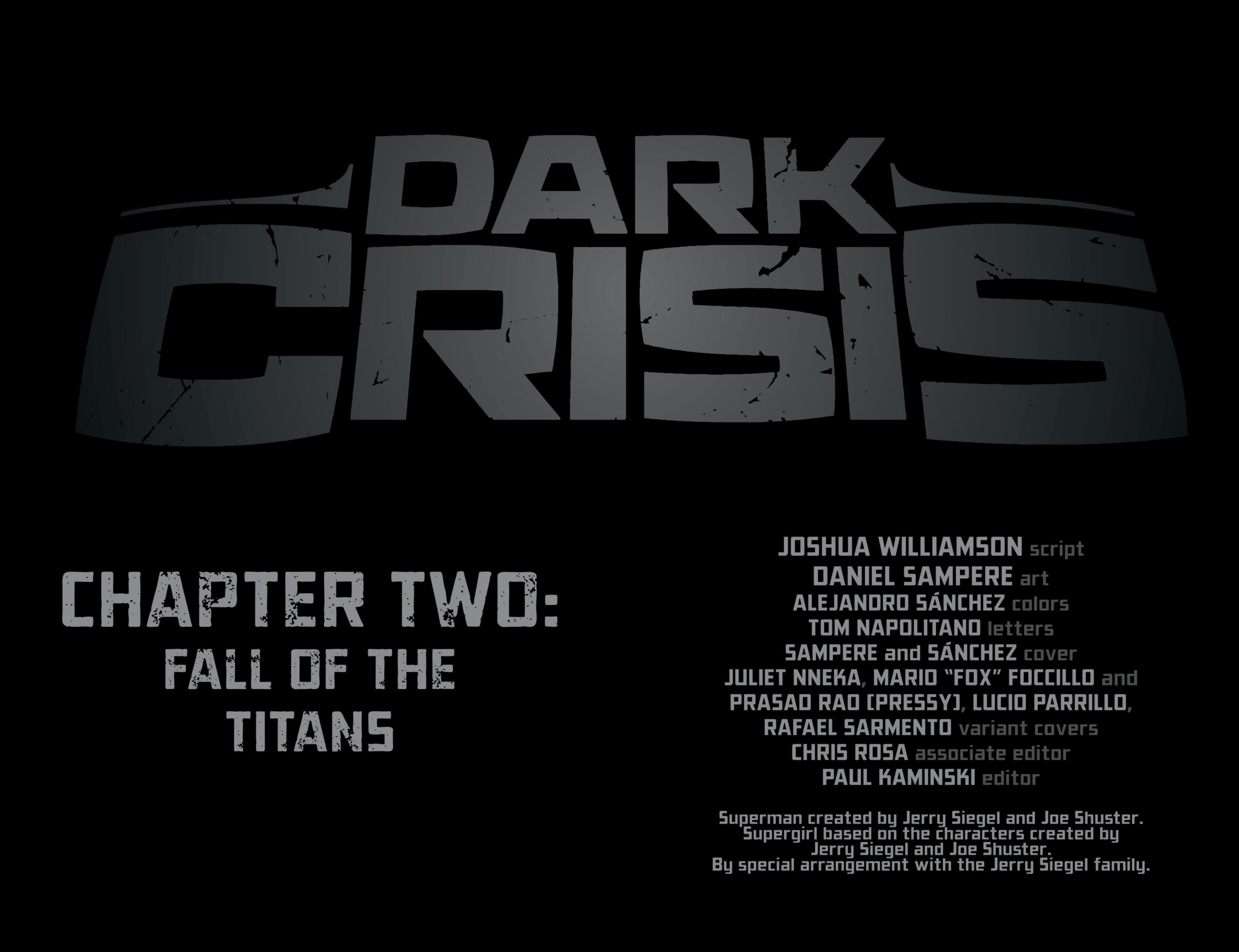 This critique comes with two caveats. First, Williamson did do some work to connect the Deathstroke storyline with the Pariah storyline. It was minor but it was there. Second, I make similar critiques about Infinite Frontier in its early days, and that series turned out fine. Nevertheless, it is concerning when a writer has only a limited number of issues to complete a story (in this case seven) and the book feels like it’s stalling, even minorly.

The Weight of Images

Daniel Sampere once again proves that he’s got the chops for a blockbuster event. Dark Crisis #2 is beautifully drawn but also heavy. Evil looks like it’s prevailing, so tonally the book is bleak. Sampere captures that bleakness in the issue’s violence. Characters are drenched in blood as they fight to the death within a burning building. Sampere’s art does a great job of conveying the pain expressed in the script. This tone is also established by Alejandro Sanchez’s colors, as he bathes these panels in a menacing orange tint derived from the flames. Even when the fire isn’t directly in the picture, the tint is there, reminding the reader that this scene is dire and momentous for the Titans. 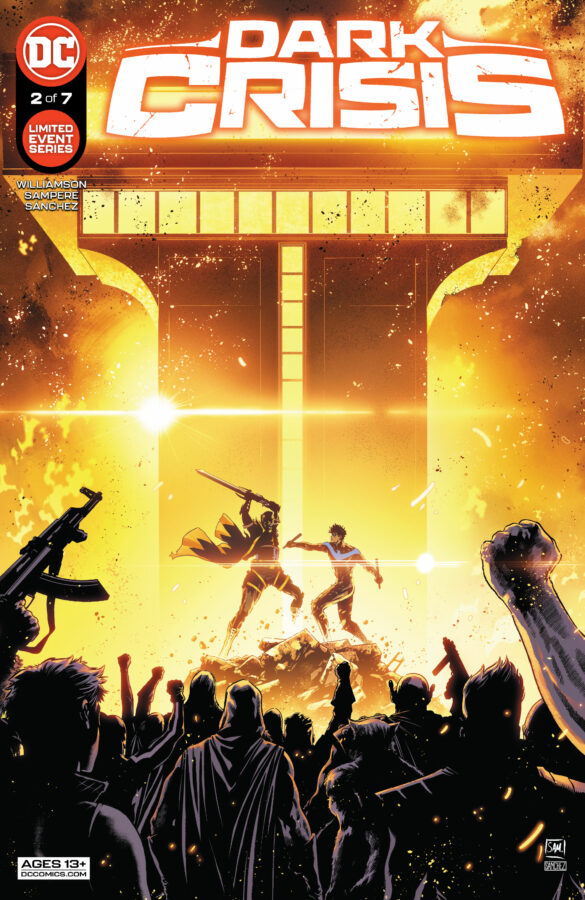 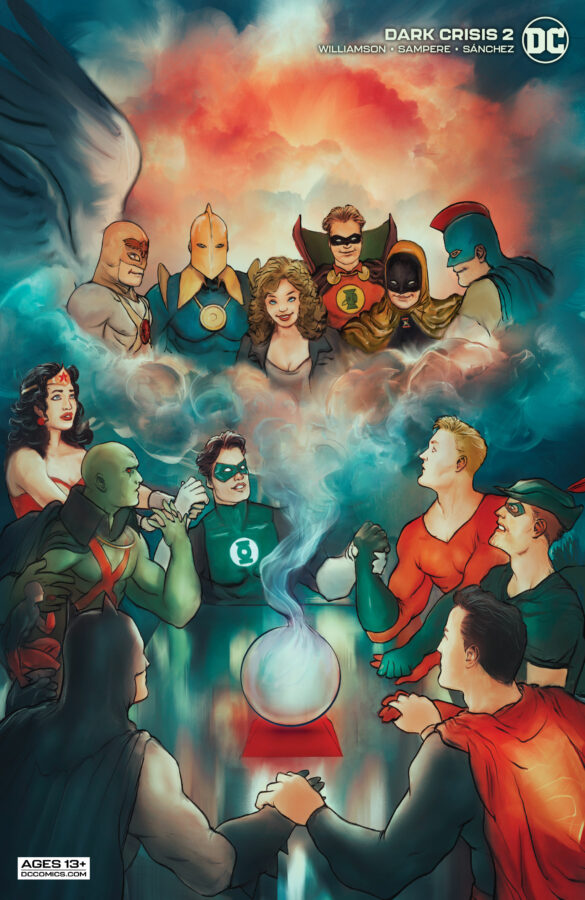 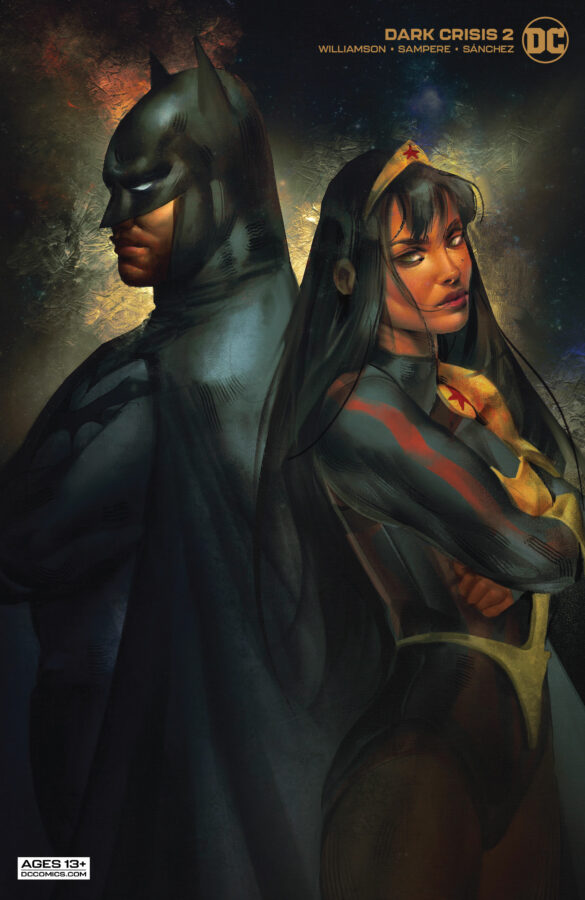 Dark Crisis #2 is simply a glorified fight scene, as the Slade conflict takes up the vast majority of the issue. Williamson does a great job establishing the dramatic tension of this plotline, albeit at the expense of other parts of the larger story. Sampere’s work is fantastic and is well complemented by Sanchez’s colors.

Overall, the book is engaging and enthralling; however, I hope Williamson shifts gears soon because, right now, Dark Crisis feels a little scattered.