“The Many Arms of Death Finale”: Blackstar 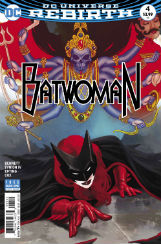 At last! We have finally reached the end of “The Many Arms of Death” story arc! Yep, you’ve read it, the first story arc in Batwoman’s Rebirth series has officially come to a close. Man, what a thrilling arc this has turned out to be. This arc had everything I had hoped for: thrilling action, a wonderfully written main character and fantastic artwork! After reading issue #4, Batwoman is steadily becoming one of my favourite DC superheroines. Writing duo, Marguerite Bennett and James Tynion IV deserve high props for the dedication they have instilled within this character. Their passion for faithfully realising Batwoman was palpable throughout the arc.

Of course, the whole creative team deserve recognition for their contributions. Artist, Steve Epting, and colorist, Jeremy Cox, have both consistently demonstrated superb work throughout the series. Batwoman #4 contains the best examples of their artistic collaboration my eyes have had the privilege to gaze upon yet. There was one particular panel that just blew me away. This panel was truly a sight to behold. In this panel, we only partially see Batwoman’s face, because the remainder of it is shrouded in darkness. The words Batwoman utters within this panel actually terrified me.

“You’ve never seen how dark I can go,” the exact words the scarlet-haired crimefighter proclaims before she fights her old friend Tahani. The coloring and drawing were simply incredible! This one panel visualizes the morally questionable methods Batwoman is willing to utilize to accomplish her mission. Having most of Batwoman’s face enveloped in darkness was a clever representation of Batwoman’s darker anti-hero qualities. I was so astonished by this visceral panel that I actually want to frame it up on my wall as a portrait!

There is one other panel I have to mention. In this full-page panel, Batwoman and Tahani are surrounded by fire as they prepare to brawl again. As the two warriors ready themselves in their fighting stances, Batwoman says “I was forged by fire.” Oh my goodness, the work that went into creating the flames was outstanding! Just how the characters’ bodies are illuminated by the fire looked so believable. The attention to detail that Steve Epting and Jeremy Cox instilled into the artwork is astounding. From Batwoman’s streaming red hair, to the ripples in the water and I’m happy to say that the character faces’ are still as finely detailed as ever. 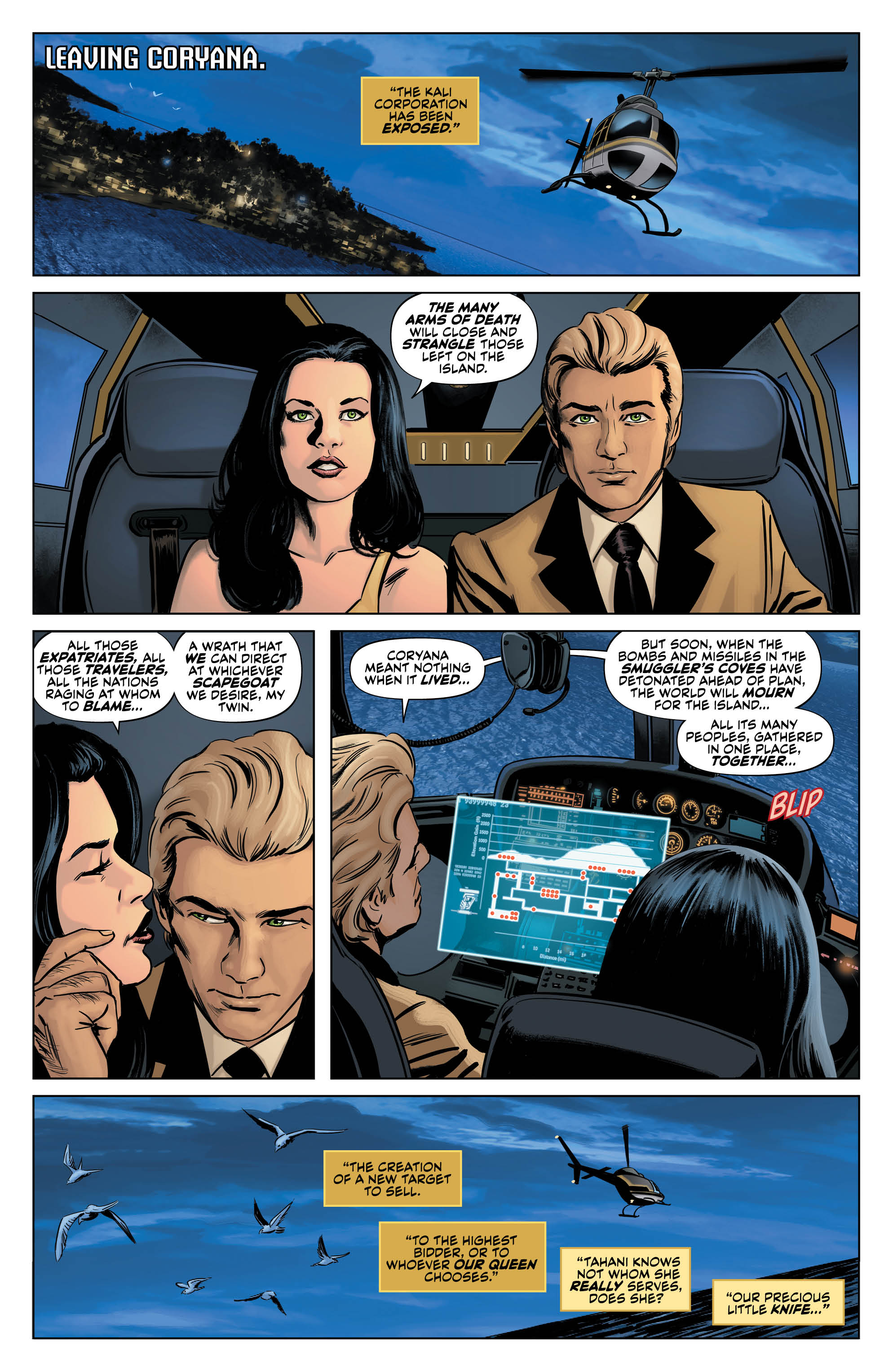 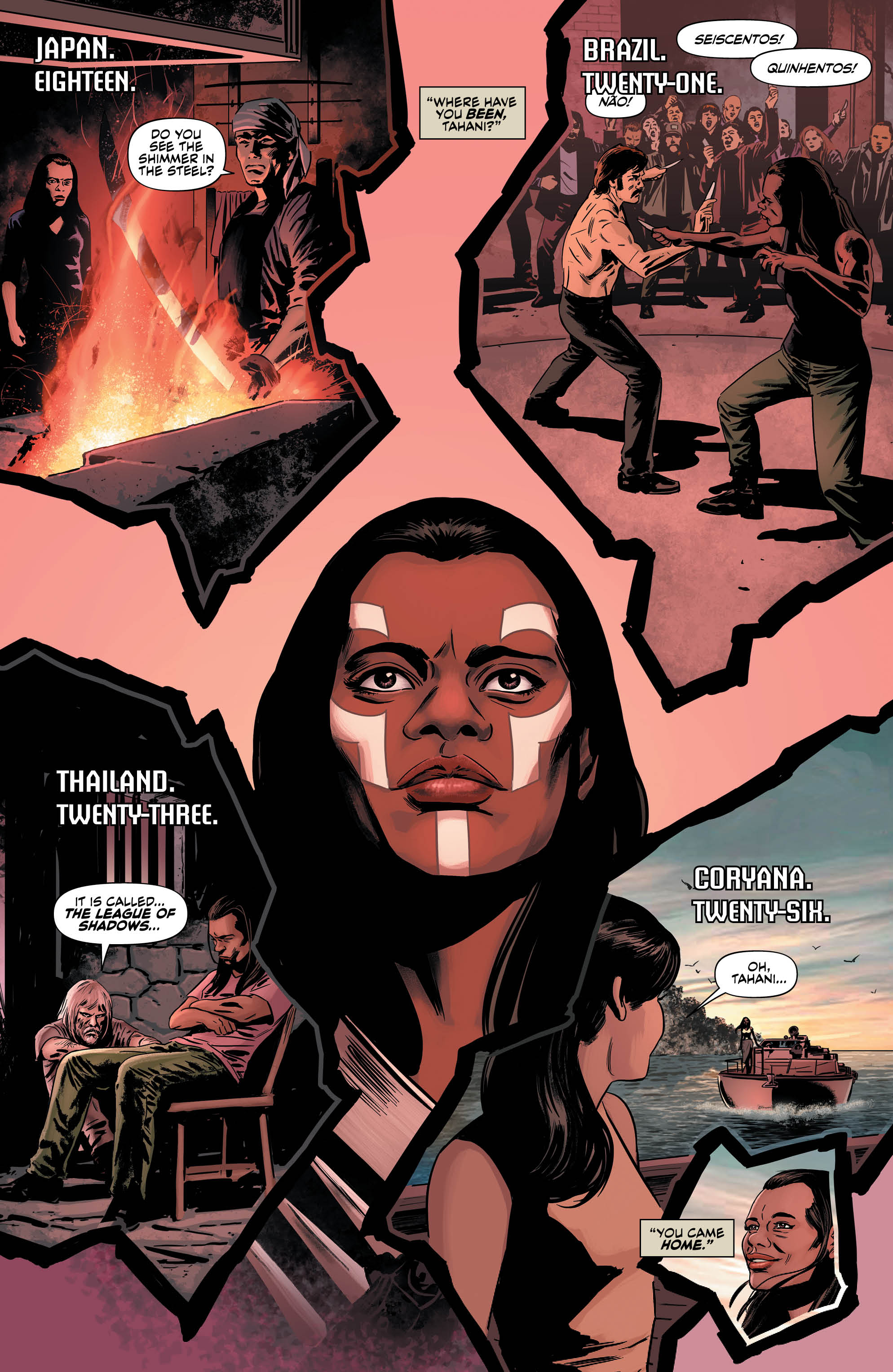 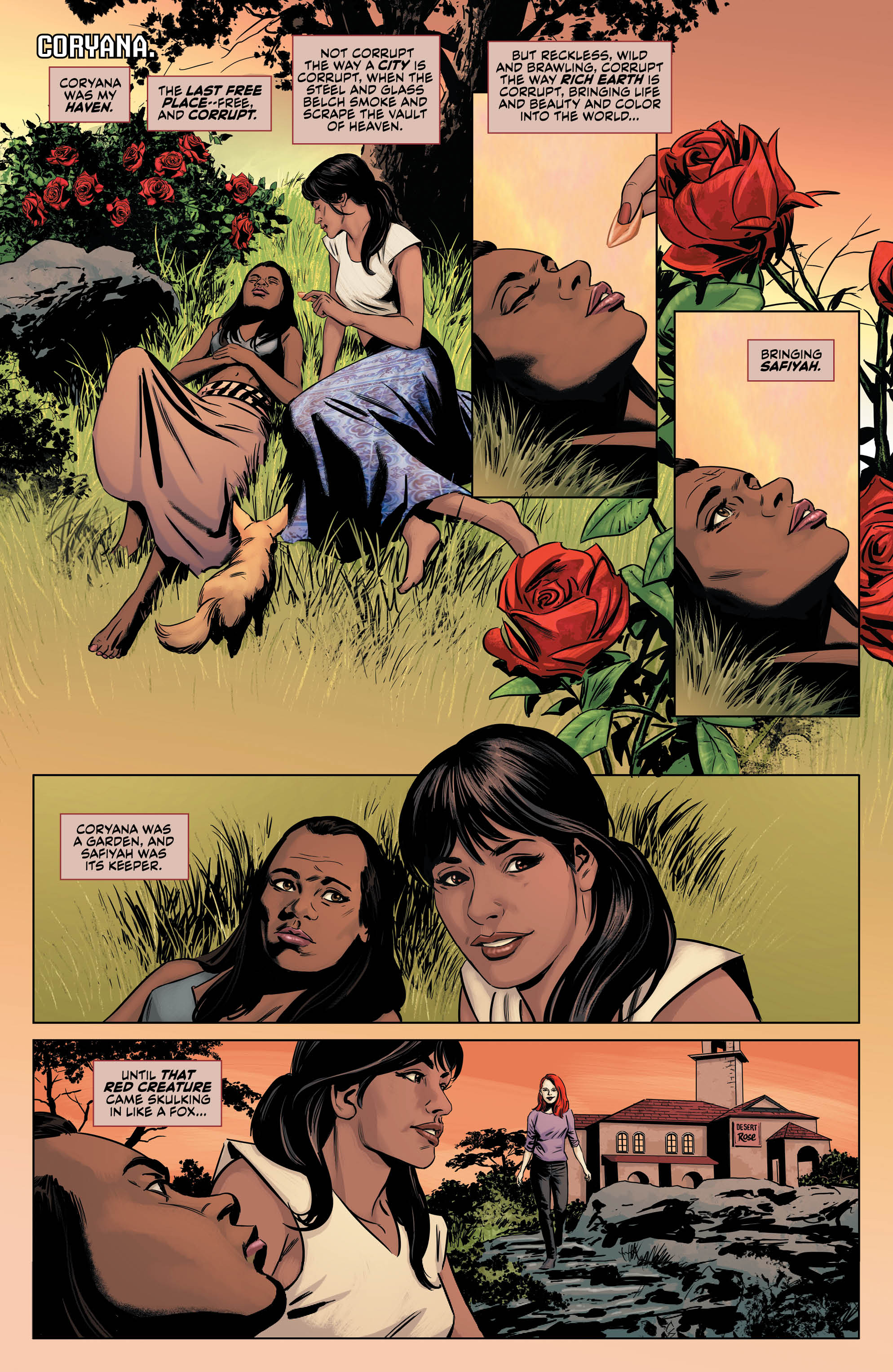 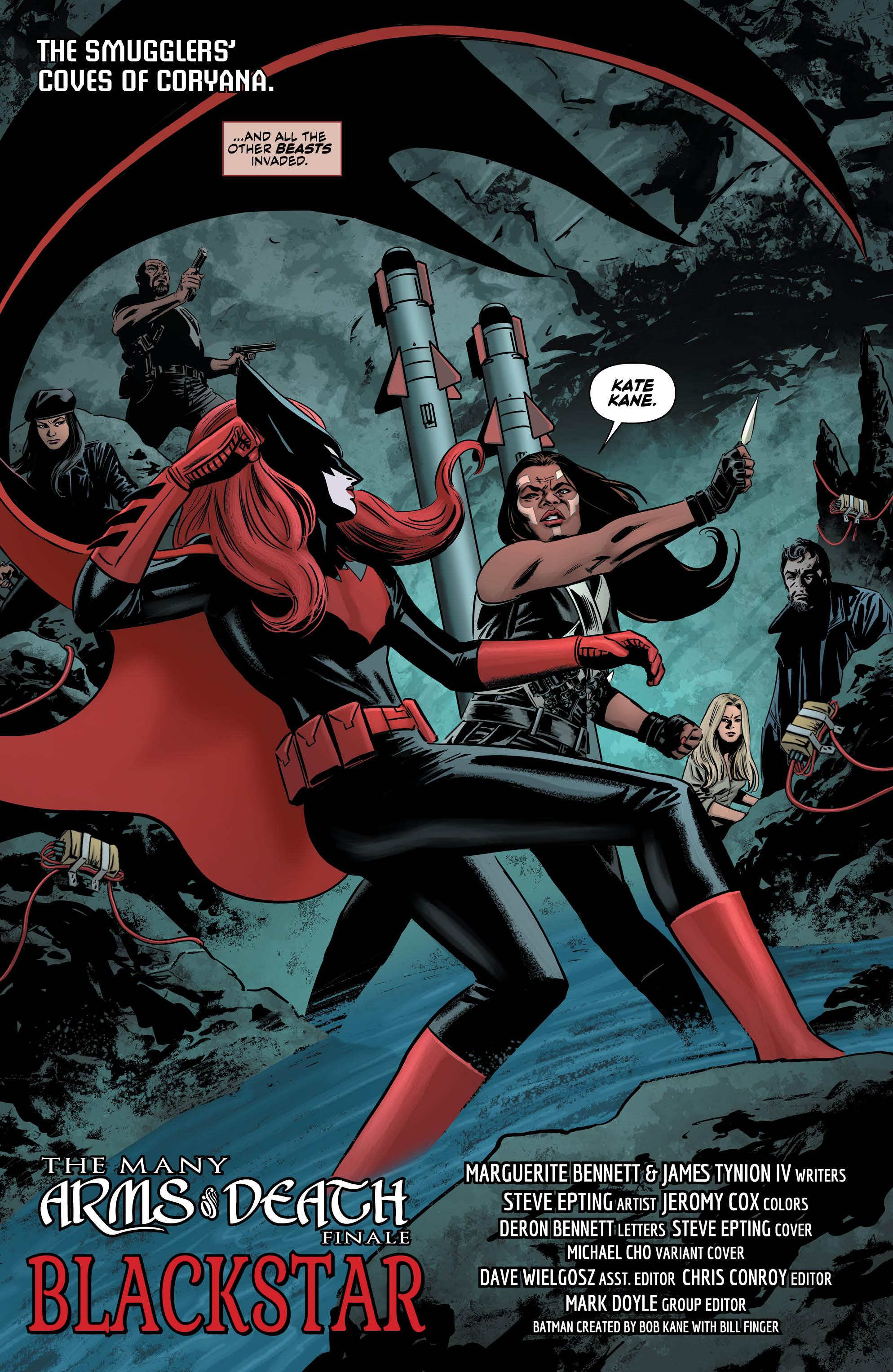 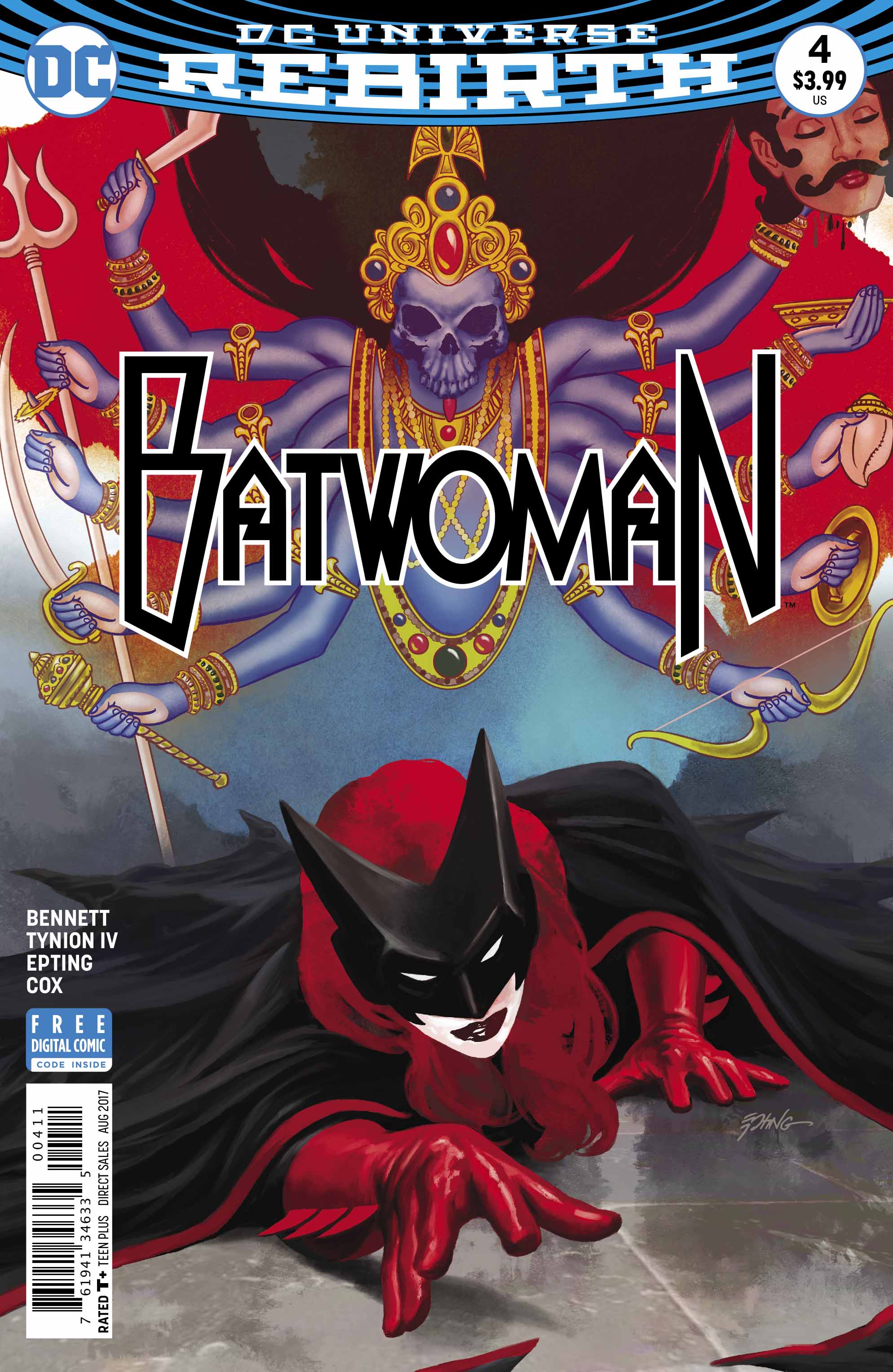 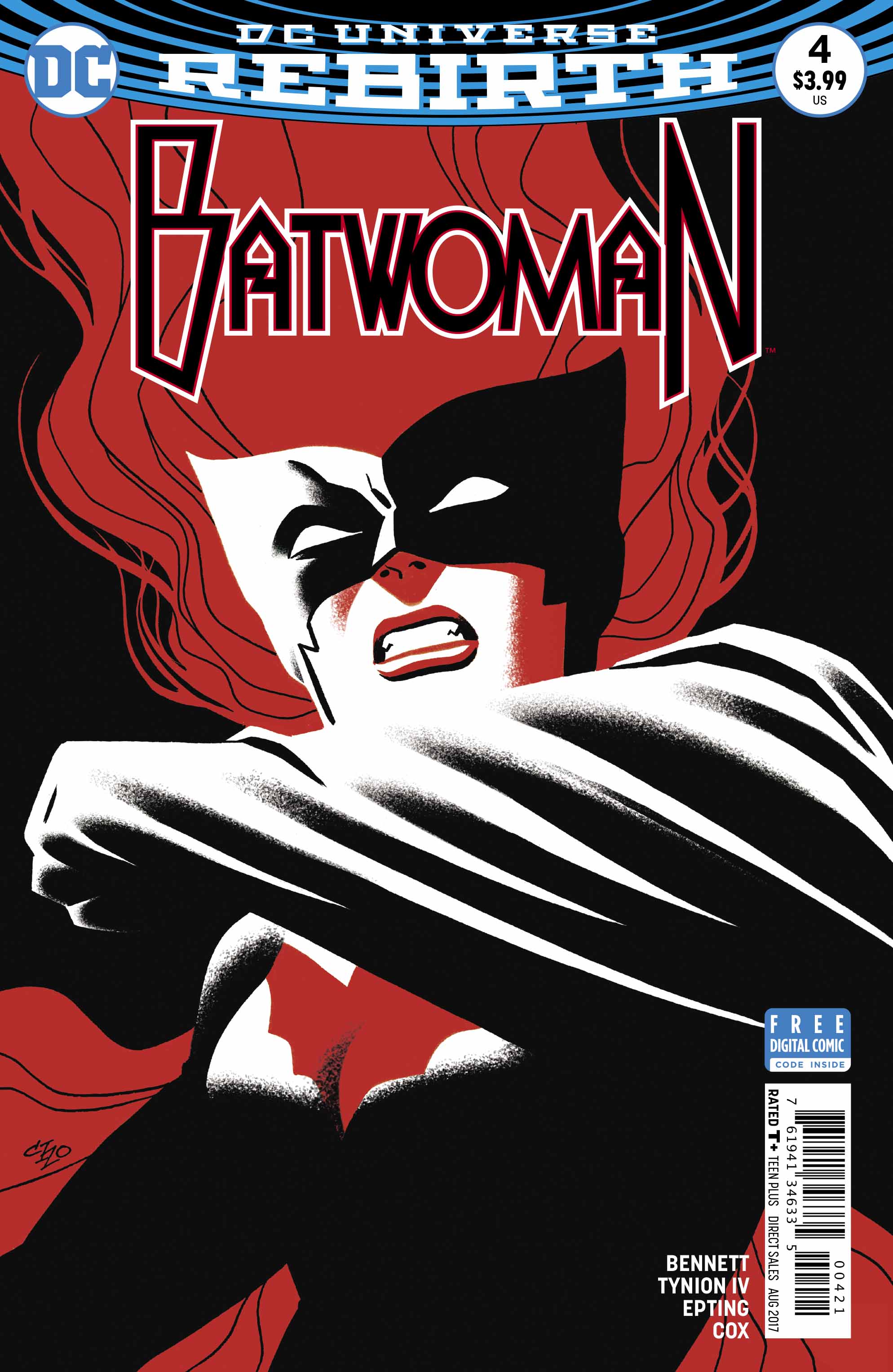 Issue #4 presents a quick recap chronicling key events which occurred in Tahani’s adult life. Through this recap, we are provided deeper insight into Tahani’s character motivations. After enduring years of hardship living as a street orphan, Tahani found solace on Coryana with her mentor, Safiyah. Life on Coryana was basically paradise for her. That was until Kate Kane (Batwoman’s alter ego) arrived. Kate Kane’s arrival brought along the mercenaries inhabiting Coryana today. Tahani blames Batwoman for “taking” Safiyah away from her.

Batwoman fights Tahani, while her mercenary team work to deactivate the explosives infesting Coryana’s caverns. After a gruelling fight, Tahani ultimately retreats and Batwoman’s mercenary companions prevent Coryana’s destruction. Batwoman leaves Coryana in the care of one of her mercernary companions and resumes her vigilante escapades.

I found the plot had great pacing. The plot moves along at a steady pace, despite a large portion of it dedicated to Batwoman’s brawl with Tahani. Fortunately, the fight between the two warriors was expertly crafted. The action flowed seamlessly from panel to panel. One thing I always admire from comic book writers is the ability to tell a well told and paced story that’s not clouded by overabundant exposition. The dialogue is sharp, engaging and kept to a minimum. I commend letterer Deron Bennett for carefully positioning the speech bubbles so they would never obscure the character’s faces.

Although I did love the story arc’s conclusion, I felt there some unresolved plot points that consequently left me with a few questions such as:

Does Tahani have ties with The League of Shadows?

What happened to Safiyah?

Are The League of Shadows and The Many Arms of Death somehow connected to each other?

But I guess they’re story elements waiting to be explored in future arcs. And in the end, it was more about the journey than the destination.

Overall, “The Many Arms of Death” arc was an exhilarating read from start to finish. While the ending did feel slightly unresolved, the journey towards that ending was definitely worth it. The whole creative team have delivered a worthy addition to Batwoman’s growing mythos.  Steve Epting and Jeremy Cox, thank you for your fantastic, awe-inspiring artwork! Marguerite Bennett and James Tynion IV, thank you for making the story such a joy to read! Deron Bennett, your lettering skills are exceptionable and keep up the great work!

I implore all Batwoman and DC fans to grab your copies of issue #4 now. You will not be disappointed!