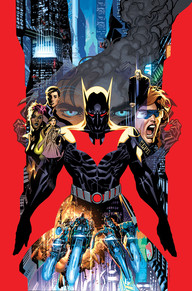 In case you missed the review of last month’s Batman Beyond issue, which kicked off the “Rebirth” era for the title, I’ll admit it again: I’m not a big BB fan. Nothing against the version (I really do respect it and think it’s done well), it’s just not my Batman.

I may hop onto the bandwagon (although, this version would be flying wagons, right?) now though, Last month’s issue was fantastic, and this week’s issue was another solid story. We pick things up basically right where we left off: Terry McGinnis is back in the suit, his friend Dana has been kidnapped, the Jokerz have taken over the narrows (not really, but it still works), and the ultimate clown could be coming back to the future. Those are the main beats this issue. Dan Jurgens does a great job pacing throughout each page, giving us a perfect blend of dialogue, drama, and action. He builds some great tension, refers a little to the title’s previous run, and lays some groundwork for the future.

The art is once again top-notch. Bernard Chang takes over for Ryan Sook and while they both have their own unique style, they both work. My favorite panels in this issue are Batman’s struggles to fend off all of the Jokerz…oh, and that last page. THAT is an interesting way to end a book, and has a little bit of pressure to deliver the payoff next issue.

In a nutshell, Batman Beyond #1 is a good start to a new story. Good action, great drama, and overall just fun. If it can make a fan out of me, there’s plenty of room on that bandwagon for you too.