Exclusive: Scott Lobdell Discusses A New Era for ‘Red Hood and the Outlaws’ 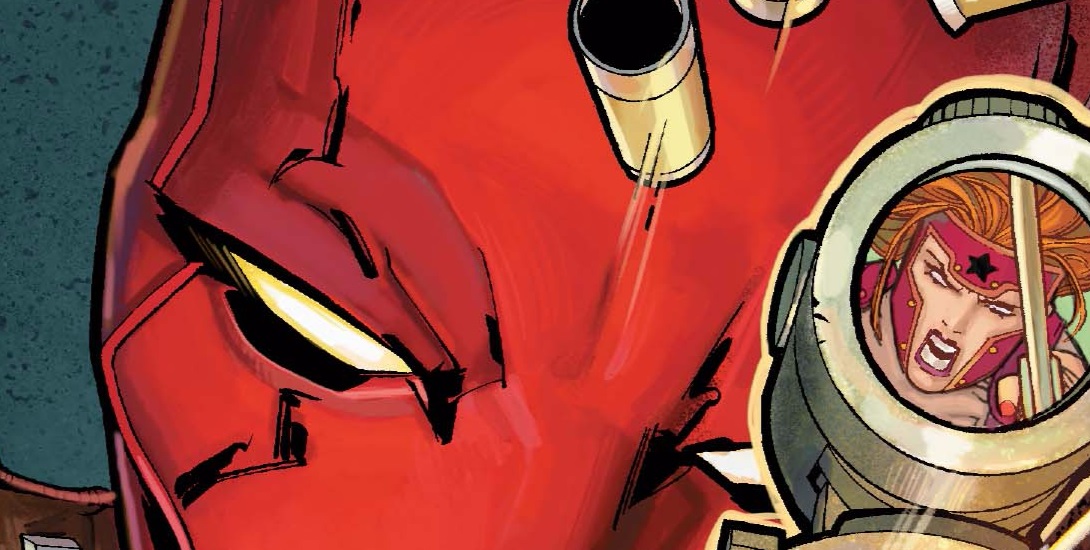 As frequent visitors of this site may know, one of my favorite books to launch this past July as part of DC’s Rebirth initiative was that of Red Hood and the Outlaws. Not only will this title guide the former Robin in a bold new direction and shed light on his past, it will also unite him with the likes of Bizarro and Artemis. Yes, you read that correctly.

I recently had the privilege of chatting with writer Scott Lobdell, who has been Jason Todd’s guiding hand for a half decade. In that time, he has obviously had the chance to get inside the anti-hero’s head as few other scribes have been able to. His detailed responses to some of my questions really forced me to believe that he is far from finished with this character and that many layers are being consistently added. In short, Lobdell is the right man for the job.

Pay attention to his response to my third question in particular. Not only does it provide insight into the Dark Trinity, as they are being called, but I found it to be profound insofar that the new series can be quite inspiring to readers. We could probably learn something from these three misfits and maybe it will help some people embrace who they are instead of what expectations of them happen to be. It kind of reminded me of the following Friedrich Nietzsche quote: “One must want nothing to be different -not forward, not backward, not in all eternity. Not only bear what is necessary, but to love it.”

Be aware that some spoilers regarding Red Hood and the Outlaws #1 are ahead.

DKN: Red Hood and the Outlaws has embraced what Rebirth is all about: It’s taking classic concepts and bringing them into the modern era. Why did you decide to reintegrate the classic Post-Crisis origin of Jason Todd into modern continuity, along with Ma Gunn? I have to admit the latter brought a smile to my face.

Scott Lobdell: There’s nothing in The New 52 that precluded Ma Gunn. It was just part of the origin that wasn’t touched on whenever I was touching on his earlier days. Similarly, if people go back and see The New 52, there were elements that if readers wanted to add in the origin of him knocking over the Batmobile, that could still exist. I don’t think I used Rebirth to go back on his more recent origin as much as it fleshed it out more. I read a review where someone complained that it doesn’t make sense that Bruce would give Jason more burgers and then take him to the mansion and say, “You’re Robin.” That’s not how it happened.

As the series progresses, we’re going to be filling in more gaps. We’re going to realize that Ma Gunn has always been a part of Jason’s origin and what got him to where he is now. This marm version of her is a cover for using all that money she’s made to kind of live the high life. I would love to have her show up more and be an Alfred for the team.

DKN: So far, the book has focused largely on Jason. Will the series focus on the “Red Hood” in Red Hood and the Outlaws or will it be shared as the team comes together, which as I gather, is occurring quite organically?

SL: I think this really is a story about Red Hood AND the Outlaws, whether those Outlaws are Arsenal and Starfire or whether they’re Artemis and Bizarro or whether there’s another incarnation of that team somewhere down the road. But I think that if there’s a team called “The Outlaws” it wouldn’t be the same; what does Jason mean to these characters and, almost more importantly, what do these characters that are in Jason’s life mean to him?

Jason is inherently a loner and yet this is essentially the second time he’s kind of allowing people to orbit his life. They say you can pick your friends but you can’t pick your family. Here is another instance where one might look at Red Hood and say, “He’s a loner. He would not hang out with these people. He would move on.” But the fact that he doesn’t is what I think is so much fun about exploring why Jason once again finds himself in a position of having teammates and ultimately friends and people that he cares about. 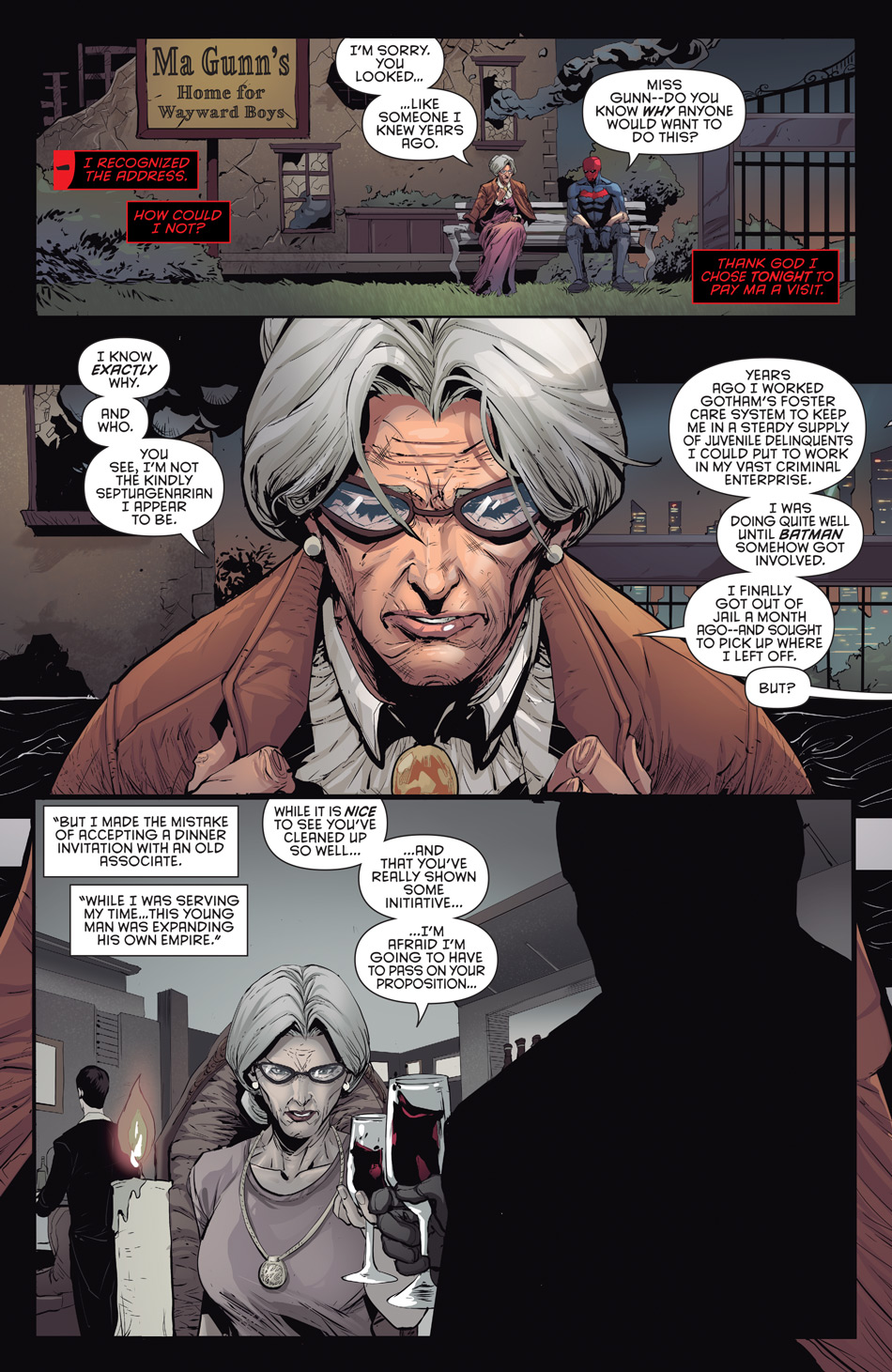 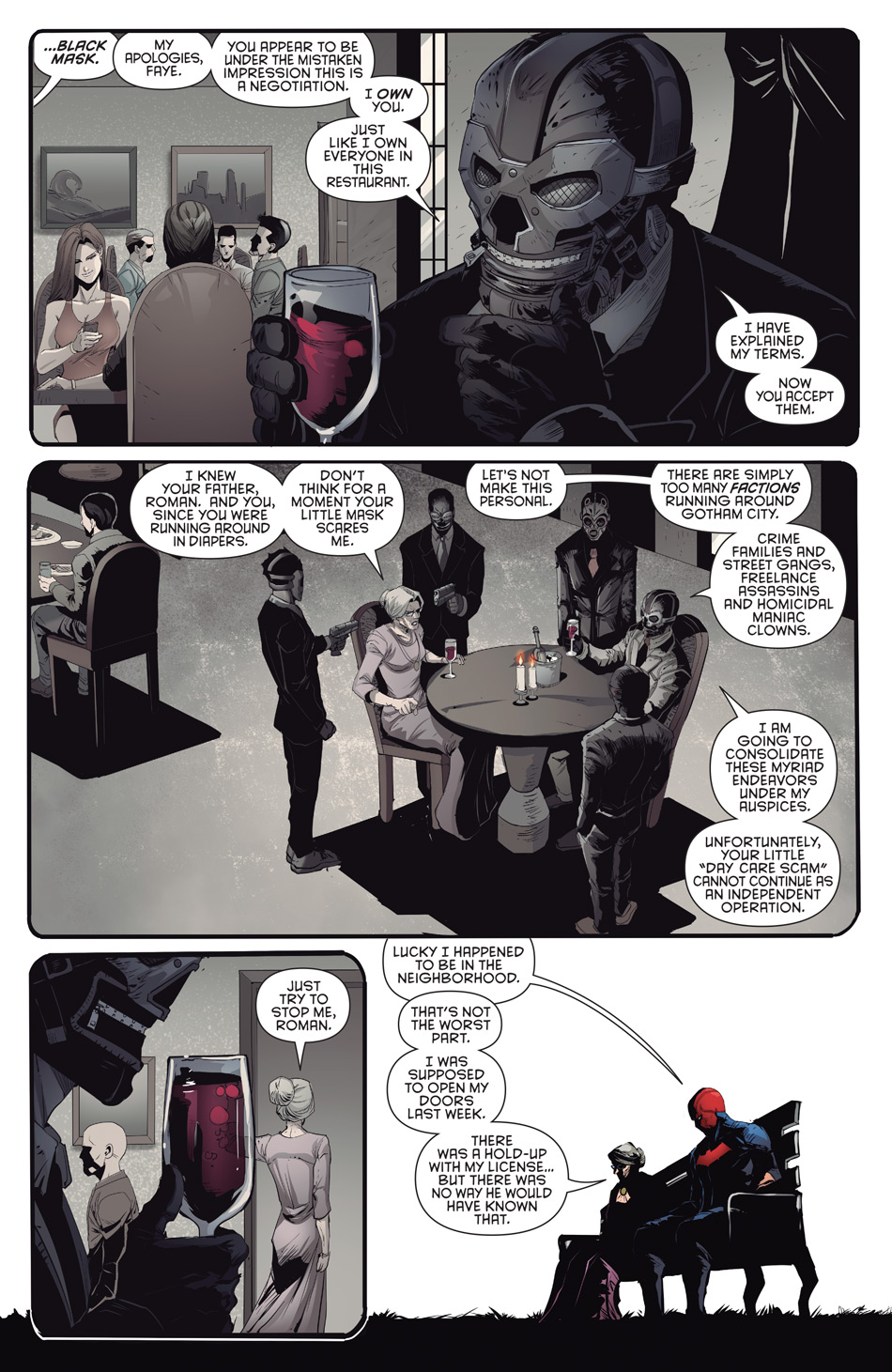 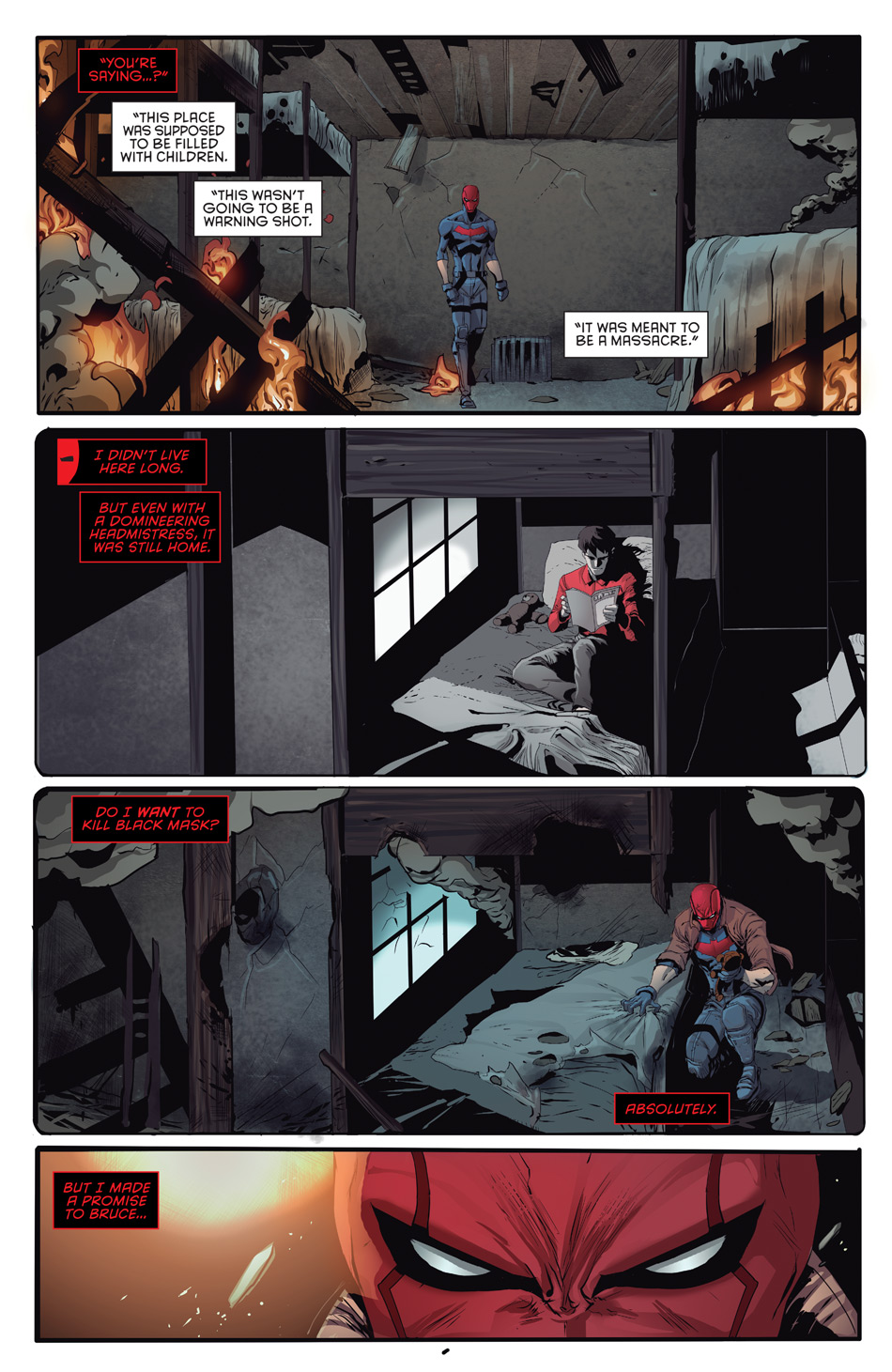 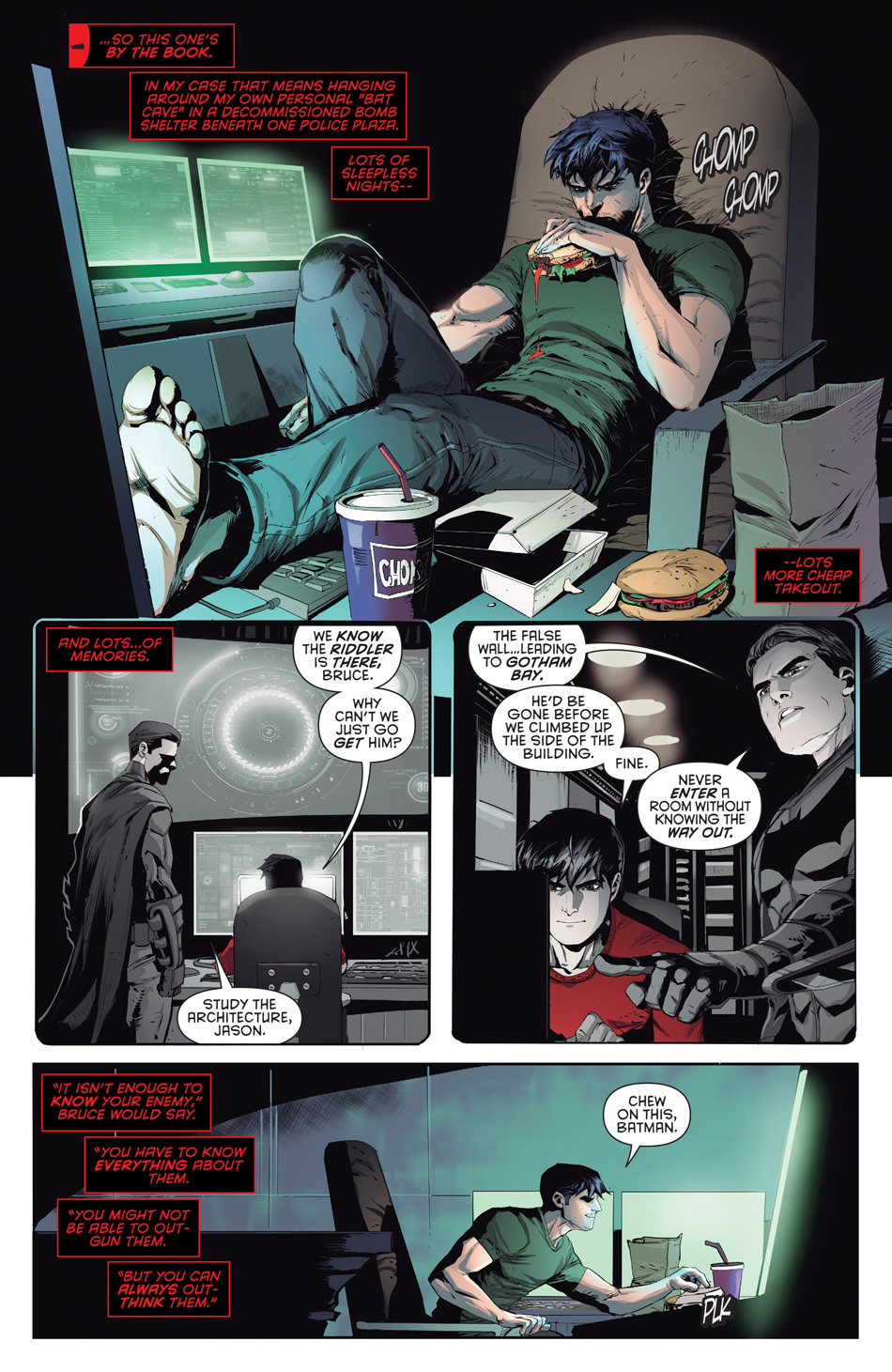 DKN: I think the lineup of what has been termed “The Dark Trinity” alone can sell the book. How did you arrive at choosing those three specific characters?

SL: Well, I was very fortunate because there’s a lot of press about the really strong interest in all the Rebirth titles. And instead of crawling to editorial and asking for the coolest characters I could write… Geoff [Johns] was the mastermind behind essentially saying, “If you’re gonna do Red Hood and the Outlaws, let’s give the book and Jason characters that are in his league as well as [being] reflective of his own personal journey.” He can call himself Jason or Robin or Red Hood, but what he can never call himself is Batman because there is a Batman and, if there’s ever a new Batman, it’s probably not gonna be him.

Just the same way, Artemis is never going to be Wonder Woman any more than Bizarro is gonna be Superman. I can’t imagine anyone wanting to read a story about people who are not gonna be more famous, more powerful versions of themselves. So instead, Red Hood and the Outlaws is really about what happens as Red Hood, Artemis, and Bizarro become the best versions of themselves. And this Trinity, we’re using the term “dark,” but might be better explained as a twisted reflection on these characters.

DKN: With Black Mask being the introductory villain and Jason going deep cover, do you see your book as giving a look into the Gotham underworld in a way that isn’t being explored in other Bat books at the moment?

SL: Yes, I think like even in the first Rebirth [one-shot] that thug comes up to Jason and presents a Black Mask card. I think it’s a glimpse into the fact that even henchmen have a role to play in the underground. Usually, it seems to me that when we see Penguin, most of the time he is at his desk. You don’t really know what happens to him between here and there. Joker is a perfect example of a character who is horrific, but he is horrific because we don’t know much about him. We don’t see him go home and make himself a bagel or get one of his henchmen to do it.

And with Red Hood, even within the first episode, he decides he wants in. Could we cut all the research away? Could we cut the notion of Jason trying to figure out his way in? We could have, sure. We could have even opened up with the scene of Red Hood attacking Black Mask’s limo. But I think it’s important to show how he finds his past and his kind of oddball concern for Ma Gunn and studying Black Mask and how it brings back memories of his internship under Batman. [It] all helps bring it to a point that when he starts to get involved with Black Mask, Black Mask realizes why it’s such a treacherous territory for him. Batman is concerned why he’s giving Jason enough rope, he’s hoping that he doesn’t trip himself up in it. I just finished scripting the third issue and that’s when we really get a look at Roman’s home and why it’s important for Roman to find himself involved with Jason.

DKN: At conventions in the Detroit area, I see a lot of Red Hood cosplayers. Granted we have an animated movie and video games, but when you talk to fans, they actually do love the Outlaws comics. It seems like a good chunk of Jason Todd’s fan base was built under your watch. How do you feel personally knowing that you’re responsible for a big portion of this character’s fan base?

SL: I couldn’t be any more thrilled. I’ve done a lot of conventions here, too, and make it a point to grab a selfie with some of the Red Hood fans. I love the Red Hood fans, whether they’re cosplayers or there’s a bunch of websites. On Instagram, I see Red Hood fan art. Not only do I like it, I put comments on it because I think it’s an honor that people have responded to a Jason that has moved on past the initial traumas of his life and is trying to make things better for himself. I think that’s what people are responding to a lot of times. Jason, like a lot of us, have had problems in our past and made the colossal mistakes that Batman or Superman or other character’s don’t. 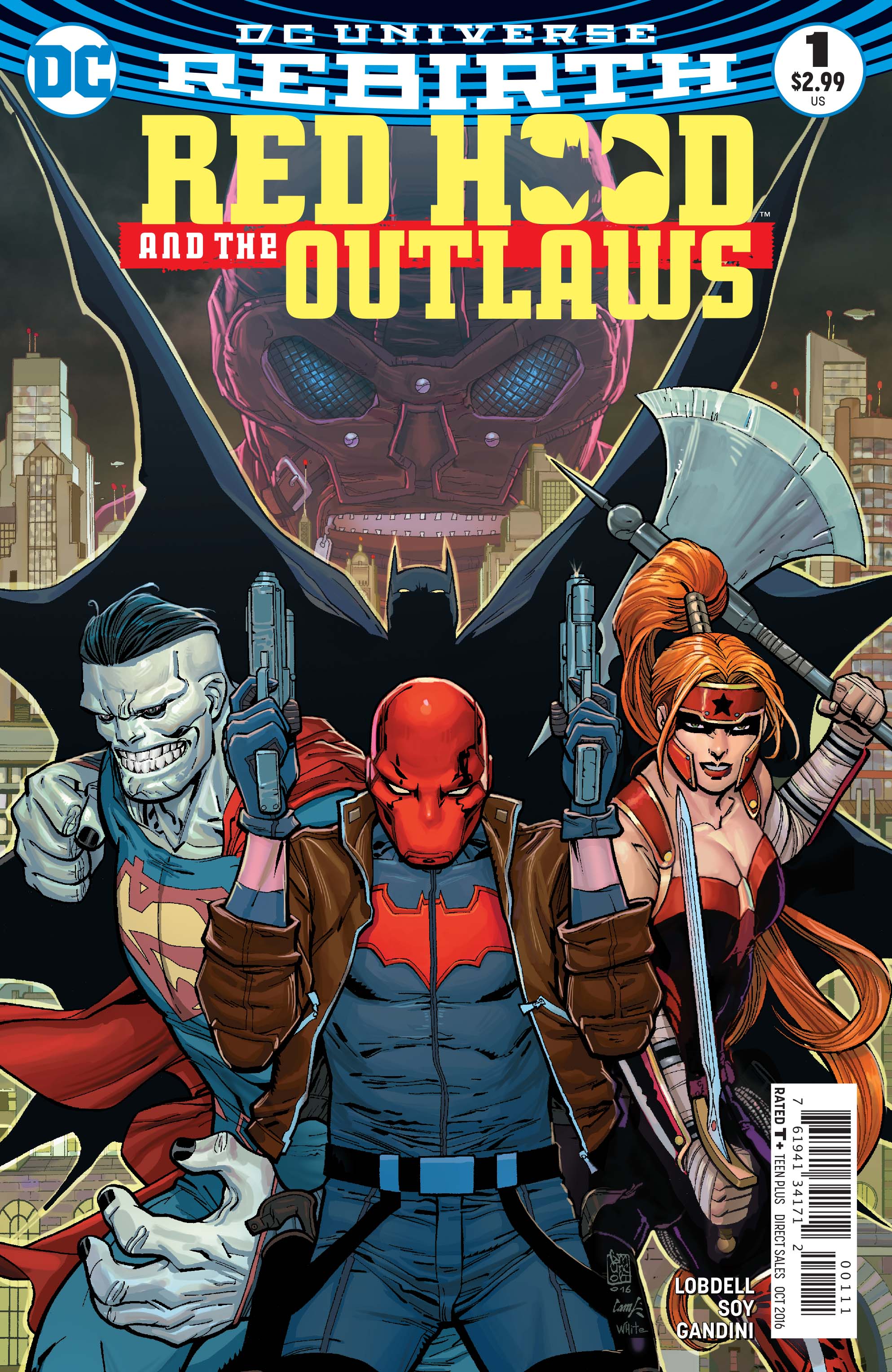 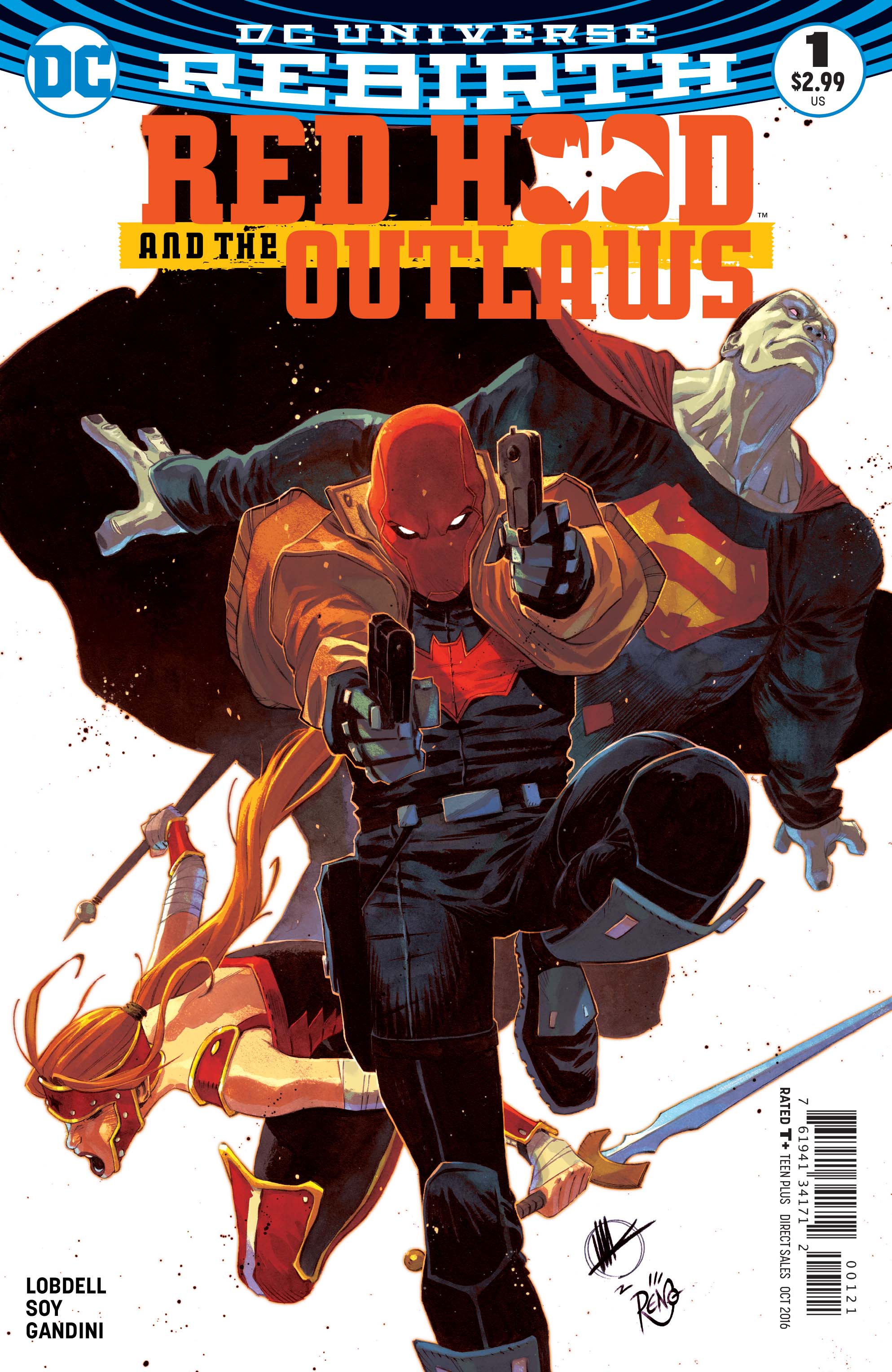