Deathstroke Tied Up In Another DC Project

Deathstroke the Terminator is one of DC’s most versatile villains, becoming a deadly adversary for Batman, the Teen Titans, and for Green Arrow on the television show, Arrow. The character can fit practically anywhere, and it’s no surprise that because of his major presence on Arrow, fans of the show have been clamoring for more of the one-eyed assassin.

A fan on Tumblr posed the question to producer Marc Guggenheim recently, to which he provided a very interesting response. Guggenheim said that Slade Wilson is actually tied up in another DC project, and won’t be making an appearance in the latest season. 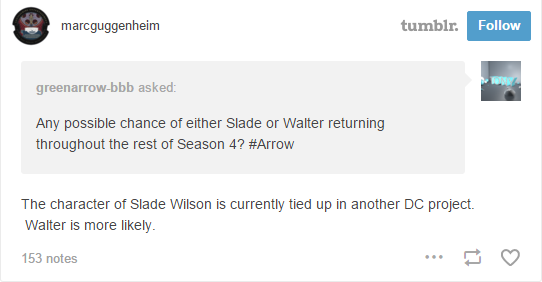 This could be for a multitude of reasons: they could finally be making that Titans TV show, or perhaps the powers may be using him in the DC Extended Universe. Whatever the reason might be, there are plans in the works for our favorite mercenary.