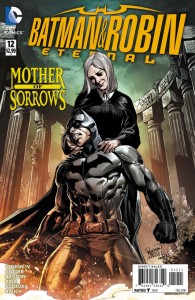 For the second consecutive week, Batman & Robin Eternal is essentially the “Dick Grayson and Harper Row Show.” And much like last week, the revelations keep on coming.

As Sculptor gets a head full of Dick, we embark on a guided tour of the telepath’s history. Not only do we learn more about Sculptor’s sordid past, we also gain more insight into the backgrounds of Orphan and Mother. Learning how Mother conditions her children coupled with the knowledge of just how vast her reach truly is makes for a chilling read.

Speaking of trips down memory lane, we unfortunately didn’t learn more of Dick’s New 52 history, but we did see more of the shady past dealings between Batman and Mother. I still don’t know what to make of these scenes, but part of me suspects that Sculptor may still be in collusion with Mother and is conditioning Dick with hopes of him coming to their side.

As usual, the time to gush over Eternal’s art has arrived. This week, penciling duties are handled by Javier Pina and Wonder Woman veteran Goran Sudzuka. Their stellar work is brought to vibrant life by the colors of John Rauch, who once again makes an issue of this series a visual feast.

Next week marks the halfway point for this series, so things should really heat up. You probably won’t want to miss an issue from here on out, so don’t skip this one.