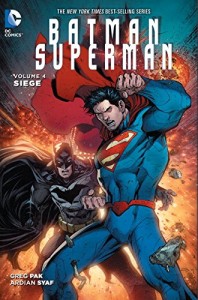 With Batman v Superman: Dawn of Justice hitting theaters in a few long months, now is the perfect time for a book such as this to arrive. Casual and devoted fans alike will probably flock to bookstores looking for titles featuring both icons and I must say that this is a pretty solid read. Well, the final inclusion left a bitter taste in my mouth, but I’ll get to that later in this review.

Writer Greg Pak once again displays his knack for writing the World’s Finest duo. He knows what makes Batman Batman and what makes Superman Superman. Just as important, he knows how to play them off each other; they may not always agree with each other, but in the end, they are best buddies. That’s something I look for in any team-up that involves my two favorite fictional characters.

Ardian Syaf, whom you may remember from Superman: Earth One, Volume 3, provides artwork for most of this volume that is worth the price of admission alone. He’s been one of my favorite artists of the past five years and I always get excited when he works on a book such as this. Whenever he gets the chance to work on Batman, he makes The Dark Knight look iconic in nearly every panel. Despite a number of inkers contributing to this book, I don’t feel it hindered Syaf’s art in the slightest.

You may have heard about this story while it was originally being printed in the monthly book, as it did garner a decent amount of press. It was the one referred to as “Superman’s Joker.”

By that, they don’t mean it’s his new number one nemesis or that he’s fighting a superpowered clown. What we’re dealing with is someone who is unpredictable, ruthless, and without morals; you will never know why they do the things they do. But much like the Joker, this knave carries out precise, sickening attacks which confound Superman.

Said attacks target those closest to Superman as well as key public figures, one of which is Lex Luthor. Although Luthor makes a brief appearance, he’s written just as I want him to be: confident, arrogant, and probably right.

I don’t want to spoil the wealth of the mystery, but I’ll just say that we get to see Batman, Superman, and Supergirl take part in one of the most inventive stories involving Kandor that I’ve ever read. Furthermore, it puts a new twist on the history of Superman’s family.

The villain, however, is not as terrifying once he is revealed. His backstory felt a little too similar to Zod’s for me. 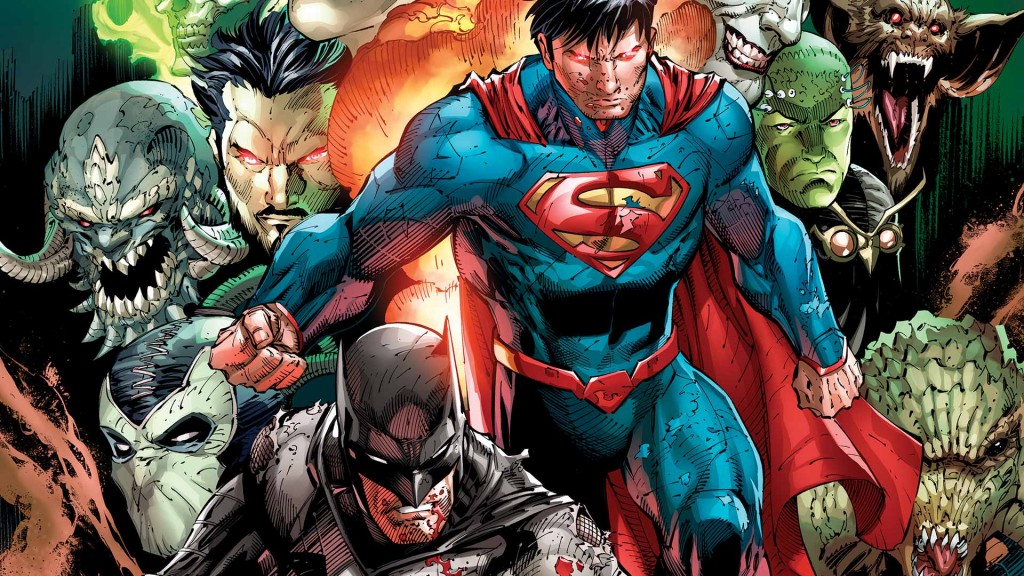 Also included is the story originally printed in Batman/Superman Annual #2. It sees the villain that just plagued our heroes psychically influence the likes of Bane, Killer Croc, Cheshire, and a host of ninja Man-Bats to hunt Clark Kent after he is once again rendered temporarily powerless after using the Solar Flare. Batman and some innocent bystanders also get drawn into this high octane cat and mouse game. The only downside is that I felt too many artists contributed to this fluidly told story. A vast lineup such as that is better suited to a tale that contains flashbacks, dreams, or an anthology.

The book’s only real detractor, which I briefly mentioned earlier, is the inclusion of the Futures End tie-in. It’s oddly placed and juxtaposes a book that just spent a great deal of time displaying Batman and Superman’s unique friendship by showing a broken Batman that resents an absentee Superman five years into the future. There’s no explanation for the uninitiated. It will likely confuse casual readers to no end and probably should have just gone into some sort of Futures End collection where it would have fit better.

Complaints aside, this is probably the strongest volume of Batman/Superman yet. While the series is still not at the level of the pre-New 52 title Superman/Batman, at least in my opinion, I feel that it’s making great strides.